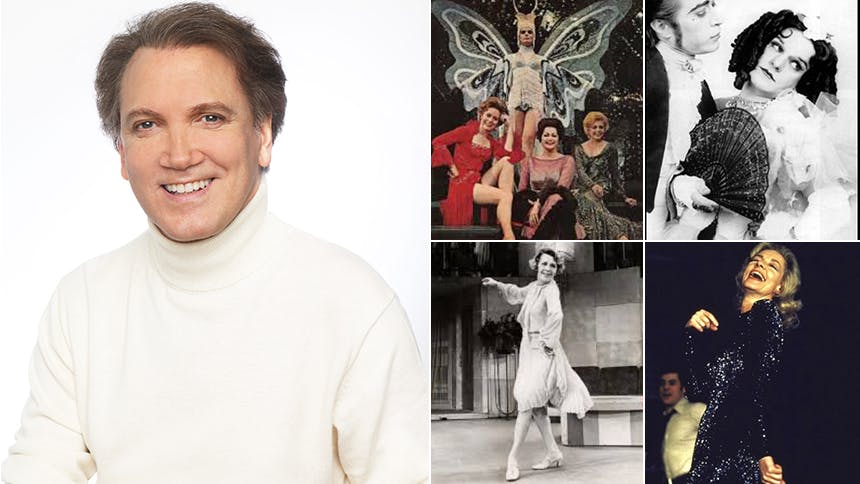 Tony Award nominee and two-time MAC Award-winning actor and playwright Charles Busch is back at Feinstein’s/54 Below February 6-8 and February 27 with his new, can’t-miss cabaret show Native New Yorker

. Through an eclectic songbook from the seventies and early eighties, Charles shares his hilarious and poignant tale of his early years striving to find a place for himself in show business. The creator & star of Vampire Lesbians of Sodom, Psycho Beach Party, The Lady in Question, The Divine Sister and Die, Mommie, Die! returns to the off-Broadway stage in 2020 leading his latest comedy, The Confession of Lily Dare, which begins a limited run at Primary Stages beginning January.

BroadwayBox caught up with Charles to hear from him about five of those early, influential pieces of theatre he saw in NYC in the 1970s and how they had a hand in creating the iconic theatre artist he has become.

Growing up stagestruck in New York City, I was fortunate to have been taken to the theatre by my indomitable Aunt Lil from the age of nine. As a child, I saw everything from The Owl and the Pussycat to Mame to John Osborne’s Inadmissible Evidence. In 1972, I was off to Northwestern University in Evanston, Illinois and remained in Chicago for a few years after graduation. Therefore, most of my memorable New York theatergoing in the seventies was squeezed into the first few years of the decade.

This was a play by Elinor Jones with incidental music and songs by Harvey Schmidt. It was a portrait of the great French novelist, starred the extraordinary Zoe Caldwell and presented at the Ellen Stewart Theatre far on the lower East Side. A very scary neighborhood in those days, lemme tell ya. The producers provided special buses to chauffer audiences from midtown and back. I had seen Zoe Caldwell a few years earlier in The Prime of Miss Jean Brodie, wandered backstage after the matinee and found the star alone in her dressing room. She was exceptionally kind and encouraging to this very vulnerable fourteen-year-old with theatrical dreams. As great as she was in her Tony-winning performance as Jean Brodie, she was even more thrilling as Colette. She aged from 15 to 80 in the course of the play, and without employing a French accent, seemed quintessentially Gallic. The whole evening was suffused with a kind of gorgeous erotic decadence that left an indelible impression on me.


Lauren Bacall was the epitome of glamour in this big splashy Broadway musical by Comden and Green, Lee Adams and Charles Strouse. A contemporary adaptation of the classic film All About Eve, the musical version seemed wonderfully hip and “with it.” There were musical numbers that took place at Joe Allen and amazingly in a gay bar; places at sixteen I had yet to venture. Applause evoked a sophisticated New York world that I couldn’t wait to be a part of. Most of all, it was a showcase for Lauren Bacall to give a huge star performance. She couldn’t sing in the conventional sense, but she dominated the stage and demanded we take her seriously as a musical comedy star. We surrendered and were rapturous.


I can chart my entire adult life through productions of the Stephen Sondheim/ James Goldman musical Follies. I saw the original Broadway production at the age of sixteen. I don’t think I’ve ever seen anything as lavish and magical as when Boris Aronson’s Loveland set miraculously appeared in the second half of the show. As a teenager, I was overcome by the costumes and sets and…actresses. A stage full of actresses! Young, middle-aged and old. All fabulous. I saw the show again in my thirties and this time I was dazzled by Stephen Sondheim’s brilliant lyrics. Saw it again in my forties and fifties and now I was devastated by the theme of regret and the roads never taken. However, that original Broadway production will always be definitive for me; breathtaking and unforgettable.


The seventies were, for this kid, largely about discovering the music and theater and films of the past. I wasn’t alone. The country was in a nostalgia craze for the twenties, thirties and forties. This revival of this 1920s Vincent Youmans/Irving Caesar musical had a high fashion chic look that made it fresh and au courant. Ruby Keeler and Patsy Kelly from the great Warner Brothers musicals of the thirties were suddenly reborn as vital Broadway personalities. My friend Andy Halliday and I used to “second act” Broadway shows when we were teenagers. We’d sneak in during the intermission. We did this several times at No, No, Nanette. However, on one occasion the balcony was completely sold out. When the lights dimmed, we frantically searched for seats to no avail. With nothing to lose, we planted ourselves on the steps of the center aisle. Naturally, a female usher asked to see our tickets and was about to give up the heave ho. A very distinguished older gentleman came down from the top of the balcony and whispered to her, “Ah, let the kids stay.” He turned out to be Sam Rubin, the head of Faberge and the husband of the show’s producer, Cyma Rubin. He sat down next to Andy and me on the steps, handed us each a piece of chewing gum and watched the rest of the show with us.

I first discovered Charles Ludlam, the artist who would be my greatest influence, a few years before when my sister Margaret and I went downtown to see Ludlam’s outrageous play Eunuchs of the Forbidden City at Westbeth Theater Center. Two years later, Charles Ludlam and his Ridiculous Theatrical Company were ensconced at a small theater on West Thirteenth Street called the Evergreen. This is where he premiered the play that cemented his reputation as a unique figure in the New York Theater. It was an adaptation of the classic play by Dumas fils and owed quite a bit to the 1937 Greta Garbo film. Ludlam surpassed himself in Camille as playwright, director and, most of all, as star. Immediately following a moment of bawdy hilarity, he could be exquisitely poignant. Photographs can’t convey the enchantment of how this man with a hairy chest and thick male features effortlessly made the audience believe he was the ethereal and beautiful Marguerite Gautier, the lady of the Camellias. If ever a performance changed a young person’s life this was it for me.

Enjoy more of Charles Busch’s incredible New York stories in ‘Native New Yorker’ at Feinstein’s/54 Below on February 6-8 and February 27.