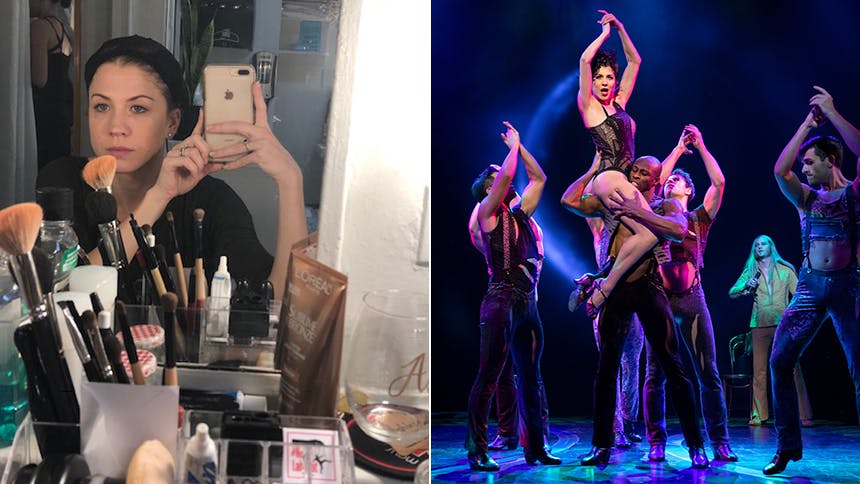 Helen Hayes nominee Ashley Blair Fitzgerald stops Broadway's new musical The Cher Show cold as The Dark Lady. Choreographed by Christopher Gattelli, "Dark Lady" is one of the most jaw-dropping and sexy dance sequences on Broadway. Ashley and the male ensemble are defying gravity and logic as they tear into Cher's iconic song. You will 100% leave the Neil Simon Theatre talking about this moment in the bio-musical.

BroadwayBox caught up with Ashley (who has previously appeared on Broadway in On the Town and Gigi) to discuss Cher's reaction to her showstopping moment, wearing Bob Mackie's favorite costume piece, and advice for aspiring Broadway dancers.

1. What were your early conversations with choreographer with Christopher Gattelli like about what this show-stopping number would be and what he envisioned for you?
Chris had this amazing idea about a woman portraying the black widow. That every man she touched was completely hypnotized by her. This number enters the show when Sonny (her previous love) and Gregg (her current love) are fighting over her.  We wanted to show how Cher finally finds a way to rise above the men controlling her. Chris wanted this number to be just as much about the acting as it was about the dancing. From there Dark Lady was born.

2. What are you serving us in that number? Where are you mentally in that moment?
This piece has been very therapeutic for me. We’ve all made life mistakes. Have had people do us wrong and hopefully triumphed over them. To me, this piece is about rising above and learning and growing from all that. There are times when the technical side takes over, but I know my boys are there for me. They allow me to lose myself and dance with complete abandon.

3. As a blonde in real life, is it fun to have this dark lady persona? Did you name her?
It is pretty funny that I’m the most opposite you can get from being a “Dark Lady”. But I LOVE that I get to completely change who I am. I heard that Beyoncé named her onstage self as Sasha Fierce, while I haven’t gone as far as giving myself a name, I will say that someone or something inside me takes over—I’m still exploring who that is, so I’ll have to get back to you on the name. Lol.

4. What’s your first memory of seeing or hearing Cher in your life?
One of the things I love most about Cher is that everyone has a version of her they can relate to. My earliest memory of her is when I was 5. I would steal my mom’s Cher tape that had “I Found Someone” on it, go down to my basement, stick it in our boombox and make up dances to the song. Every time I hear that song it reminds me of being a young girl dancing her heart out!

5. What has Cher said to you about this amazing “Dark Lady” number in the show?
Early on in the process—i.e. the lab—she expressed to the producers that she was completely blown away by the number. She loved how well-crafted it was. One of the last times she saw the show before opening, she came up and gave me the biggest hug and said how much she loved my dancing and the number! That it was her favorite dance piece in the show! Definitely a cool moment to have with her!

6. Who are the major Broadway dancers you grew up admiring, studying, and living for?
Ann Margret, Ann Reinking, Gwen Verdon, and Elizabeth Parkinson.

7. Tell us a memorable audition story.
It was my 1st callback for the tour of Come Fly Away. After a 30-min review session with the associate, THE Twyla Tharp joined us. I was so nervous because this was the very first time I’d ever danced for Twyla. She watched us go through three numbers from the show then thanked us for our time. As I was walking out, the producer stopped me and proceeded to explain they wanted to hire me to replace the leading lady, which was currently being played by Karine Plantadit. I couldn’t believe this. Never before had I been asked at an audition to join a show, and to top it off, I was asked to play one of the leads. It will always be one of my fondest memories when it comes to auditioning.

8. What’s your dream role to play & dance onstage?
I would LOVE to dance Bob Fosse’s “Trumpet Solo” from Dancin’ on Broadway. It’s always been my absolute favorite piece of music theater dance. As for a role, I’d say Brenda from Movin Out or Roxie from Chicago!

9. What’s your favorite non-Dark Lady costume you wear in The Cher Show?
In the first act, we have a section called “The Mackie Parade”. It’s basically a fashion show of classic Bob Mackie looks. One of the looks I have is this incredibly crafted Pirate costume. When Bob was creating it on me, he admitted that this was the look he was most proud of. The detail on it is UNREAL.

10. If you could offer three pieces of advice to young dancers who will see you in this show and feel inspired to dance professionally, what would they be?
A: Train. There are no short cuts to technique. It will help you with injury prevention, prolong your career and allow you to dance any type of style.

B: Take classes that stretch you outside your comfort zone. An acting class, a voice class. Dancing is acting with your body.  This will help you tell the story.

C: Be fearless and take risks. Trust your choreographers and coaches. It takes courage but if you do the work, magic can happen.