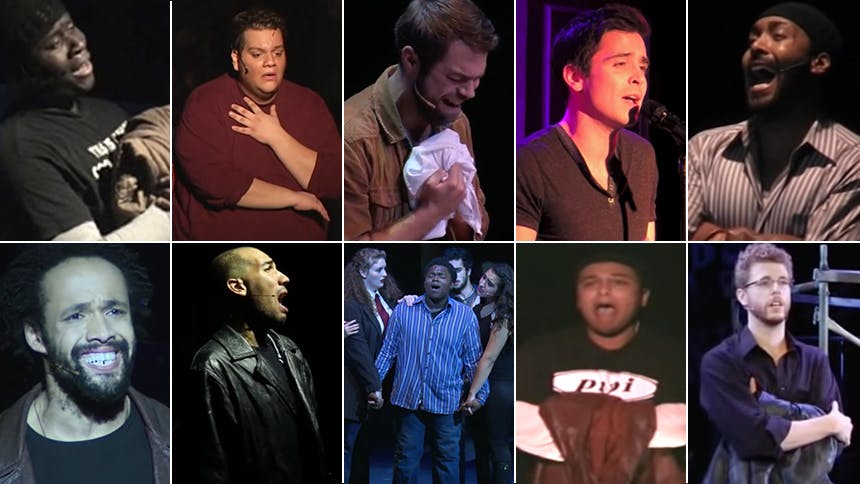 One of the most anticipated parts of Rent Live! on January 27 is going to be Tony and Emmy nominee Brandon Victor Dixon singing Tom Collins’ heartbreaking “I’ll Cover You (Reprise)”. The musical moment happens at Angel’s funeral, and, when done well, it can bring anyone to tears. As we await BVD’s version, scroll on for 15 incredible YouTube finds and performances.


It took a minute to get into this one, but best believe Edwin shows up to play at 1:43. It’s great that you can look at any production of Rent and figure out exactly who is playing who based on the clear costume types.


Those vocals, though. DAMN!


Leon starts off strong from the jump. He is giving you complete devastation here. Also, the wide shot, which includes this video of Angel coming out of drag, is beautiful and must have been so powerful as an audience member.


The candle moments are already killing me, and then Bill has this dramatic entrance into the song. It got me hooked right away. Then 3:05 happens and you’re like, “Oh damn, he’s going to really sing this, too, huh?” He goes on to surprise you at each turn (hello, 3:59). Bill truly wants you to feel Collins’ pain here.


He gives you everything you want and expect from this song and moment.


Ok, Matt with those low notes. He’s so known for his tenor; I don’t recall ever hearing this side of his voice. I’m v. into it. He is slaying vocals—I nearly fell back at 1:31. Then Ms. Bonnie obvi. serves vocals on vocals. Also, damn for that 2:25 moment, Matt Doyle.


I see you, Kendrick. His big, beautiful voice has a lot of room to play here. I clutched my pearls at 1:50. I am feelin’ his pain right now. How about at 2:25, the vocals and then the grabbing Roger(?)’s hand for strength after “expired”?


Let’s call this the abridged version. The raw vocal performances from Jonathan and Injoy Fountain, the female vocalist, are undeniable. Just wow.


This was a high school?! That’s mind-blowing. Damon’s vocals are fire and mature beyond his years. He made it seem so effortless.


I became obsessed with this boot in college, and it remains as absolutely insane and killer as ever.


Ok, strong direction. Jeroen is already crying before the song begins, and it’s all so devastating. Yes, this is in Dutch, but the performance is international—it transcends language. It’s fun to experience this number so very differently. I truly lived from 4:14-5:05.


Michael is a legend in this role (here’s him singing the same song in 1998) and really makes the song his own. He adds so much in there but it doesn’t feel too extra or compromise the moment. He is serving so much pain in the close up. (He also benefits from having a professional video.)


My gosh, the A-C-T-I-N-G. I was moved nearly to tears when he finally breaks down beginning at 3:18. Michael is delivering every lyric. Then when he turns to his friends at the end, like he can’t go on alone. Points for direction too, having all them come in to comfort and hold him up. Def a must-watch. I’m going to watch it again RN.


Damn, Vanjah is not here to play—he is here to slay. This has to be listened to full through, no stop. Jaw-dropping—2:50 is jaw-dropping. This is Jai’Len Josey levels of good.


This is a bit of a cheat because it’s a compilation video, because the actual #Rent10 video has been scrubbed from YouTube. Yes, I could have picked another video from the OG star of Broadway and the film, but then you’d miss out on 1:45-2:10.