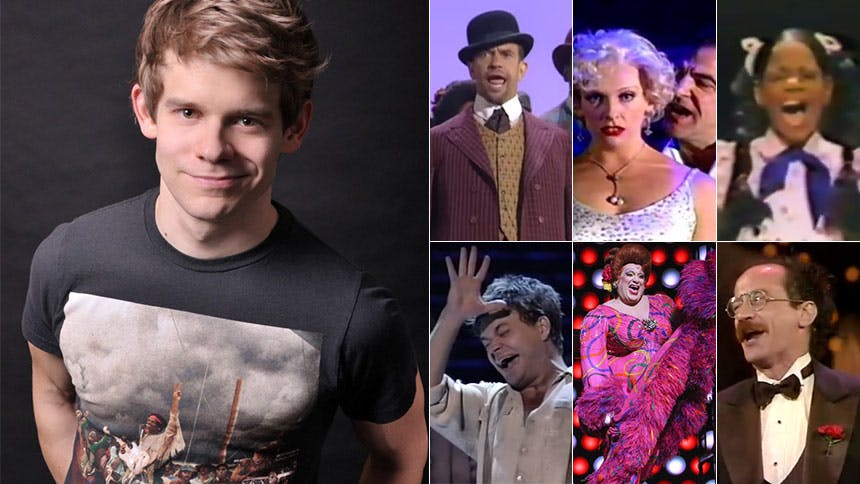 BroadwayBox’s Ultimate Top 10 Tony Performances Series continues this week with our first guest blogger, the creative genius behind Broadway’s most-addicting web series Submissions Only, Andrew Keenan-Bolger. With four Broadway musicals under his belt (Newsies, Mary Poppins, Seussical and Beauty and the Beast), this amazing series (now airing its third season) and a memorable cameo on HBO’s Looking, AKB is what the next generation of Broadway is all about; and like us, he’s an unabashed theatre nerd and cheerleader. Below, Andrew Keenan-Bolger counts down his favorite Tony Awards’ performances, and check back next Friday for a new blogger’s top 10.


Marissa Jaret Winokur and Matthew Morrison's energy in this number is absolutely infectious. How is anyone in this cast able to breathe?


Michael John LaChiusa became my favorite composer the moment Celia gave me the Hello Again cast recording for Christmas when I was 12 years old (I was a precocious kid). I missed this production on Broadway but remember giving this performance a standing ovation in my living room in Detroit.


Proving how egregiously overlooked he was during nominations, Hunter Foster freaking SLAYS this Act 2 showstopper.


The first time I heard Melba Moore hit those alien high belty notes the only reaction I could muster after was laughter.


Emily reaching over to wipe a tear from Alice's eye. I'm DEAD!


My freshman year at Michigan, the year before YouTube was invented, I remember our MT History teacher rolling in a VCR and playing us this Tony performance. Picture, if you will, the sound of 26 jaws crashing to the floor.


This is my favorite opening number of any musical, and one of my most memorable moments in life was getting to play "The Little Boy," standing downstage center singing the final verse backed up by that insanely huge cast.


1991 was the craziest year for the Tonys with Miss Saigon, The Will Rogers Follies, The Secret Garden and Once On This Island all competing against each other. The VHS of this year’s Tonys was a staple in the Keenan-Bolger's video collection.


The 1997 Tonys were the first ones that I ever got to see live. I remember losing my mind at the amount of earth-shaking power coming from these seven women. Also Sharon Wilkins' body rolls for the WIN!


The unbridled glee from these two guys, paired with Michael Jeter's freakishly elastic body, makes this performance my number one favorite. The idea of getting to perform a song as joyous as this on stage at the Tonys never ceases to bring tears to my eyes.

Newer
Five Videos From the Week on Broadway That Gave Us All Kinds of Life
Older
No Time, No Prob! Nine Shows You Can See in 90 Minutes
Sign up for BroadwayBox Discount Alerts