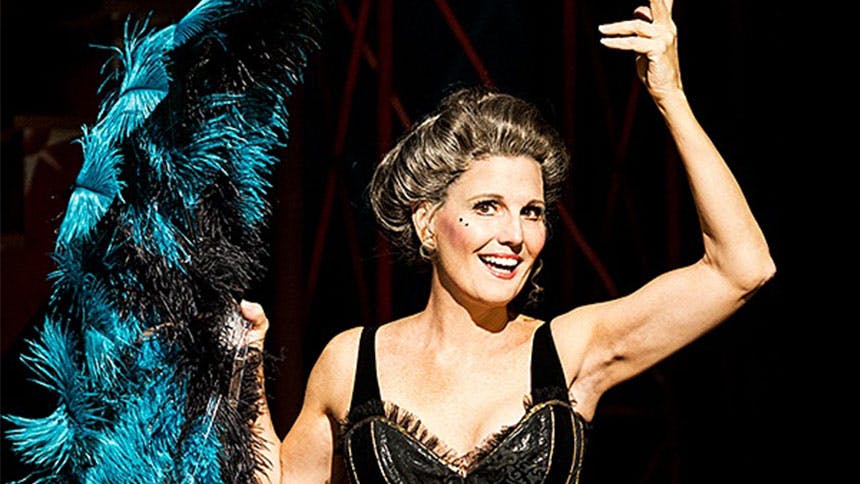 Lucie Arnaz returns to Broadway as the feisty grandmother in the Tony-winning revival of Pippin, and no doubt, the daughter of Lucille Ball and Desi Arnaz is going to stop the show with her rendition of the high-flying “No Time At All.” Pippin is the fourth Broadway outing for the Drama Desk nominee and Theatre World Award winner; she’s previously entertained New York audiences in They’re Playing Our Song, Lost in Yonkers and Dirty Rotten Scoundrels. And while she’s here in Manhattan, the Emmy-winning producer and director will also helm a reading of the new musical Hazel: A Musical Maid in America, based on the popular Ted Key cartoon. #NBD #KeepinBusy

BroadwayBox caught up with Ms. Arnaz recently to talk about her return to the Great White Way and how close grandma Berthe is to the actress portraying her. Below are five Arnaz quotes that tickled us and just had to be shared.

On Playing Herself:
“This is going to sound crazy, but I am so playing myself [in Pippin]. I’m totally me. Everything she says, I believe. I’d like to say this role is a stretch but it’s not; the only that's stretching is my back.”

On Being Too Tall For the Circus:
“I saw the show when it originated—I was a Tony voter and I voted for the show—and I saw this part and kvelled. I wish I could be asked to do something like this but I remember thinking, ‘No, I’m too tall. They hire all these short women who can look like little old grannies; they’ll never ask me.’ So when Barry Weissler [the producer] called me to do this, the first thing that came out of my mouth was, ‘I’m too tall!’”

On The New 60-something:
“I was told I looked too young. I’m 63, and this character is only supposed to be 66-years-old; even though she says in the beginning, ‘When you are as old as I my dear and I hope that you never are.’ I guess when it was written in the ‘70s Stephen Schwartz was like 14 years old—he was really young—and he thought 66 was as old as it gets. It was around the same time when The Beatles were writing ‘When I’m Sixty-Four,’ like that’s the oldest person walking on the face of the earth.”

On Trapeze Training:
“The trapeze training was fast! We had four weeks of rehearsals, and on the first day we reported (‘Yes sir!’) to the acrobat-training guy, I did crunches and pull-ups with my arms—strengthening my core. And they wouldn't have hired me if I were scared of heights. We tried that day one: can you go up on the trapeze? How do you feel? I trusted the process; I never thought ‘I won’t be able do this,’ just ‘how am I going to do this?’ They were such good coaches.”

On Her Own Feisty Grandmother:
“I had a grandmother (my mother’s mother DeDe) who was a great pioneer spirit. She really enjoyed life and had a great cackle of a laugh. Desi and I were lucky because she raised us basically, and her attitude about life was, ‘Enjoy it honey, it’s short. Let’s have pancakes for dinner.’ There was always a sense of joie de vivre about her. She would have hated needlepoint too.”