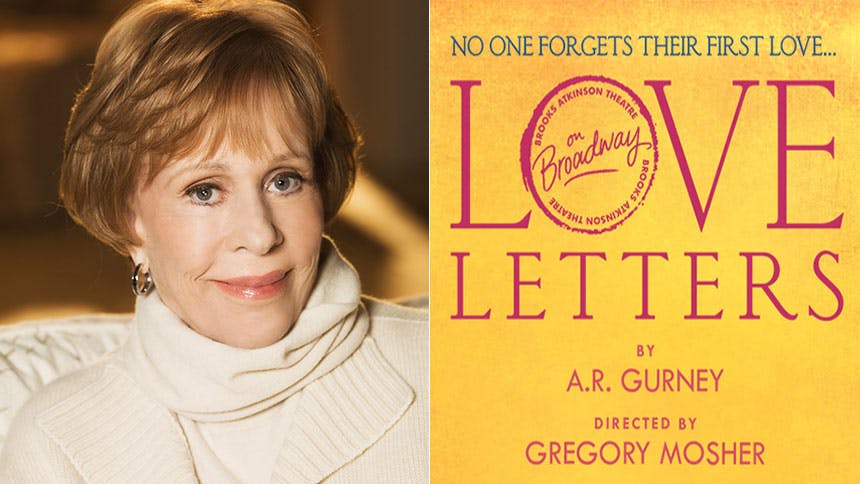 The word icon gets thrown around a lot, but how else would you or anyone else describe six-time Emmy Award winner Carol Burnett? A star who moves fluidly from stage to screen, her vast credits include Once Upon a Mattress, Putting It Together, Noises Off, Plaza Suite, Moon Over Buffalo, Annie and the groundbreaking variety hour The Carol Burnett Show. This October, the Tony Award recipient returns to the New York stage for the first time in almost 15 years to star opposite Tony winner Brian Dennehy in the acclaimed revival of Love Letters. BroadwayBox caught up with Burnett to talk about today’s comedians, Sondheim and the filming of “Easy Street.”

1. If you were going to do a Love Letters parody on The Carol Burnett Show, what do you think it would look like?
I think what I would do is have Harvey [Korman] in drag and Tim [Conway] be the guy and just see how long Harvey could keep it together.

2. Whose comedy are you a fan of right now? What women out there make you laugh?
The usual suspects; I love Tina [Fey], I love Amy [Poehler], I think Kristen Wiig is remarkable. And as far as musical people go, Kristin Chenoweth—she’s got comedy chops.

3. The Annie film was my everything growing up, especially the scenes with you, Tim Curry and Bernadette Peters. What's the best story you can tell us about filming your Rooster, Aggie and Lily scenes?
My favorite memory was when they were staging “Easy Street,” and in the original they put 400 dancers in it, they had us jumping up and down fire escapes, and there was a monkey grinder. And Tim and Bernadette and I said, ‘This is terrible. Just awful. Why are they ruining this number?’ Because it’s really just about these three crooks in the orphanage. And we filmed it for over a week with the dancers and horses going by and fishmongers and we finish and think, ‘Boy that’s a waste of money.’ At that time, it cost a million dollars to shoot that number. About two months later, I’m living in Hawaii, Bernadette’s in New York and Tim’s in London, and we all get a call from the producer saying, ‘We’re going to reshoot the ‘Easy Street’ number with just the three of you in the orphanage.’ So we all flew back and we did it, and it was much better.


4. Does Carol Burnett have a signature dish? What is it you make best?
Reservations. [Laughs] I used to make a pretty mean meatloaf—I haven’t in a while—and enchiladas. I’m good with an omelet too.

5. What’s the last play or musical you saw that really moved you?
Well, it wasn’t the last but I love Sondheim; many of his works move me, but especially Into the Woods. I love Into the Woods ‘cause I grew up loving fairytales as a kid; I used to fancy that someday I would be an artist so I would illustrate all the fairytales. So when I saw Into the Woods, I knew everything and just the way he wove the stories together and of course the beautiful songs. I’m so definitely looking forward to the film.

See the one and only Carol Burnett in ‘Love Letters’ at Broadway’s Brooks Atkinson Theatre from October 11 through November 8.