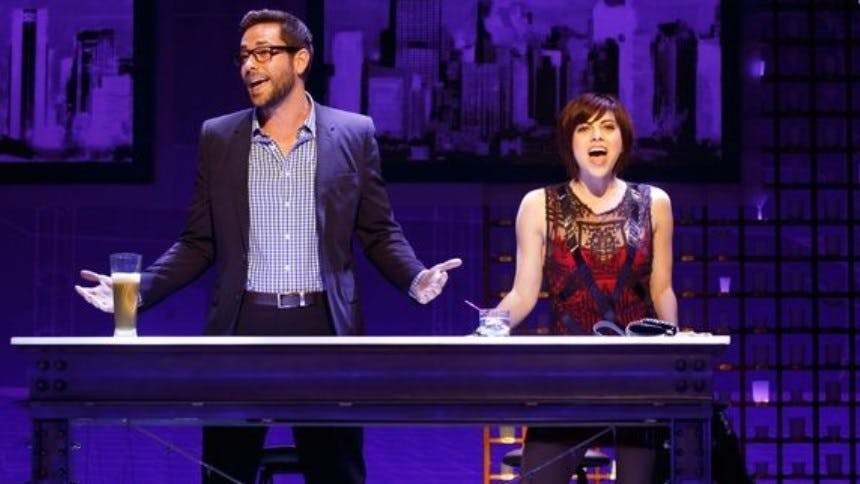 Remember how we used to get year after year of those live musical telecasts on television? With Broadway in intermission, what if those could come back but online?

Looking at the musical theatre canon, there are so many smaller cast musicals and revues that could be such a treat to see new productions of in this new Zoom age. It would take a little tech savvy and patience (and of course the official musical rights to do them!).

This afternoon, we went from A to Z throughout the variety of possible musicals that could be produced either socially distanced or via Zoom. Let's go on with the show!

Imagine the talented Broadway couples that could take on this Maltby and Shire musical about parenthood.

The show is a musical vaudeville after all! If Joel Grey can perform the song solo with The Muppets, anything is possible.

Drowsy is a spectacular show but the tunes in the show are like little vignettes. Man in Chair is already sitting downstage reminiscing, why not in a Zoom window?

Have you seen those TV commercials from dating websites showing audiences first virtual dates made from matches made on their site? Boom - First Date The Musical!

Imagine each of the Parables performed by Broadway's best! The ensemble numbers might take some tech savvy but imagine the solos like this!


Hedwig and The Angry Inch

Like Baby, this would be another fun vehicle for those super talented couples who could step into the roles made famous by Mary Martin and Robert Preston.


Jacques Brel Is Alive and Well and Living in Paris

A magnifique revue featuring the music of Jacques Brel which could expand the four person cast to showcase his extensive song catalog. We love "Carousel."


Kiss of the Spider Woman

Broadway Isolation Project made us think of this title with thanks to their beautiful quartet from this Kander & Ebb spectacular. Scaling down would be key but imagine the Aurora casting!

Southwark Playhouse in the UK recently produced a socially distanced production (where this clip is from) and picture a rotating cast of stars. We would never tire of a variety of musical theatre's best singing this Jason Robert Brown score.

Calling all actor/musicians - this musical could be so special with a Zoom era Johnny Cash, Carl Perkins, Jerry Lee Lewis and Elvis Presley.

Rather than all sitting on the stage, why not have each of the women in Guido Contini's life in their own Zoom windows? The ladies could then take center... screen for their number!


Disney's On The Record

This magical Disney revue is set in a recording studio which would lend itself to an online version! There are so many Disney on Broadway alum we would love to hear sing a night of music from those beloved classic movies and (now!) Broadway shows.

Yes, we have the Spike Lee filmed movie but let's hear Stew and Heidi Rodewald's scored musical sung by as many people as possible.


Queen of the Mist

Anything is possible and so is a Michael John LaChiusa musical about Anna Edson Taylor who wants to go over Niagara Falls performed over Zoom.


Songs For A New World

Over the summer, The Other Palace produced this Jason Robert Brown musical with an all-star cast. The singers that could deliver "Stars and the Moon" - gotta go dreamcast!

Friends Hunter, Jeff, Heidi and Susan (and Larry) took their musical from musical theatre festivals, off-Broadway to Broadway. Let's figure out how to get "An Original Musical" like [title of show] online.

It would be a privilege to see this funny musical revived and online. The ensemble numbers will need some tech sass but worth it for all of the laughs.

Let's find three ladies to perform this musical going from page to stage about a group of friends moving through the years.

Here's a fabulous revue which could highlight so many performers singing of their different occupations like Andrea Burns singing the waitress' showstopper "It's An Art."

The movie musical is so over-the-top amazing and funny we could only imagine what an online version of this Electric Light Orchestra 80's fantastical show.


You're A Good Man, Charlie Brown

"Happiness" is celebrating "Beethoven Day" on Zoom with our favorite Peanuts characters.

Okay there are very few 'Z' musicals but we are all for more online concerts featuring Broadway superstars much like the Ziegfeld Follies did back in the day like Fanny Brice, Buddy Ebsen and Milton Berle performing their legendary acts and songs. The video that instantly came to mind for us that was even comparable was the 2009 Tonys where audiences saw Elton John, Liza Minnelli, Dolly Parton and what looked like one million Broadway performers.

Newer
Hot Clip of the Day: "This Is Halloween!" James Monroe Iglehart Sings "Oogie Boogie’s Song" From THE NIGHTMARE BEFORE CHRISTMAS
Older
Who's The Cat's Meow? Let Us Know! It's Cats Opening Night Anniversary!
Sign up for BroadwayBox Discount Alerts