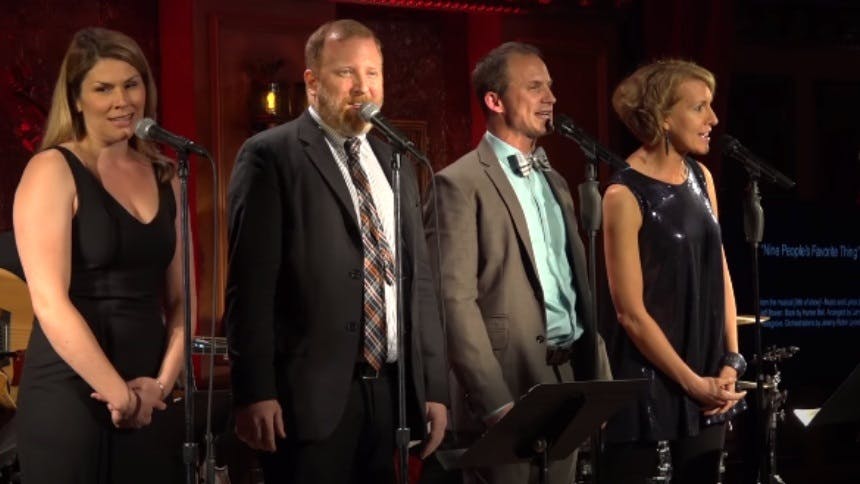 They were fine with only four chairs!

On a July night (the 17th to be exact!) in 2008 at Broadway's Lyceum Theatre, Hunter Bell, Jeff Bowen, Susan Blackwell and Heidi Blickenstaff took their opening night bow in this original musical with their pal Larry Pressgrove on the piano. The musical written by Hunter and Jeff made the journey from theatre festivals to Off-Broadway's Ars Nova and Vineyard Theatre.

The show mirrored reality a bit as the musical tells the story about characters Jeff and Hunter writing a brand new musical with friends Susan and Heidi. The musical is filled with many LOL showtunes and heartfelt ones too as the four friends work on the process of the show from festival submissions, plot changes, casting choices and more. Ultimately, the four discover they would rather be "Nine People's Favorite Thing" rather than 100 people's 9th favorite thing.

They sure have become the favorite of theatre fans everywhere with productions all over the U.S. and internationally. We've collected nine different productions of [title of show] singing Hunter, Jeff, Susan and Heidi's motto. Happy 12th Opening Night [title of show] fans!


The Chagrin Falls Academy for the Performing Arts

Newer
6 Songs Full Of "The Sweetest Sounds" Sung By Legendary Diahann Carroll
Older
Hot Clip of the Day: Lovely Lucie Arnaz In They're Playing Our Song!
Sign up for BroadwayBox Discount Alerts