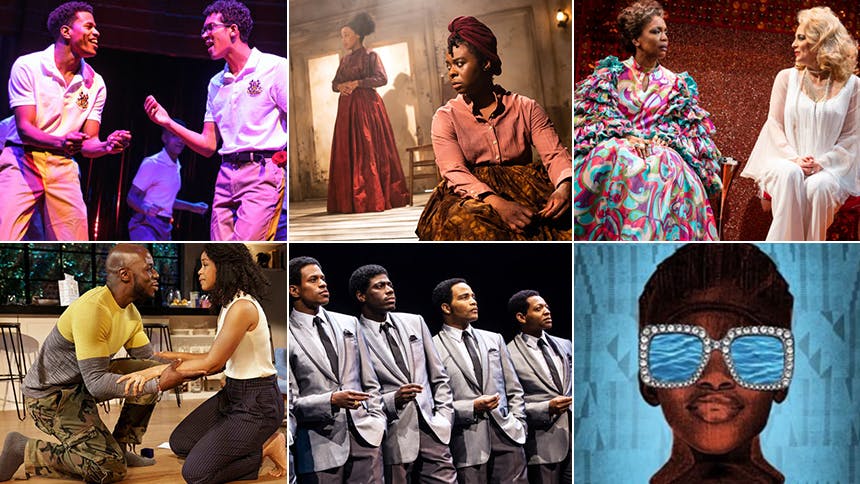 As Black History Month comes to a close, BroadwayBox spotlights eight plays and musicals in NYC that are telling important black stories onstage, ranging from contemporary fiction to historically based.


This heartfelt and moving play follows a group of black young men during their senior year in a private prep school, particularly the struggles of the choir’s out gay teen Pharus. It is the Broadway debut from playwright Tarell Alvin McCraney, who won an Oscar for his film Moonlight, and an absolute must-see. Performances end March 10 at Broadway’s Friedman Theatre.

By the Way, Meet Vera Stark at Signature Theatre


This comedy from Pulitzer Prize winner Lynn Nottage examines the legacy and hardships of African American women in film through the career of fictional Vera Stark, as she goes from a maid to groundbreaking screen icon to obscurity and folklore. It’s a critically-acclaimed revival with an incredible ensemble cast telling an important story about those early African American trailblazers in Hollywood.

Behind The Sheet at Ensemble Studio Theatre


This world-premiere piece from playwright Charly Evon Simpson pulls the curtain back on the "father of modern gynecology" and his inhumane experiments on enslaved black women. The drama draws from the lives of Anarcha, Betsey, and Lucy, three of the enslaved women in 1840s Alabama who were used by the legendary Dr. J Marion Sims for experiment on under the guise of improving gynecology, no matter the cost (one being that he did not use anesthesia on them!). It’s an eye-opening look at a piece of history we never hear about in school, and the limited run ends March 10.


The music and the behind-the-scenes drama of the iconic Motown group The Temptations takes center stage in this flashy, sharp new bio-musical from the creators of Jersey Boys. You know the iconic songs, but now learn about the true story of the men behind the music. It’s a story of friendship and betrayal amid the civil unrest that tore America apart.


This world premiere is set in the village of Affreakah-Amirrorkah and is a contemporary riff on a West African fable by playwright Tori Sampson. Through music and dance, the play examines of the hardships around the notions of beauty for African women.

The Light at MCC Theater


This powerful and timely two-hander from Loy A. Webb is performed in real time and looks at a young African American couple broken by secrets and doubt. There are twists and turns to the story, but know that in the time of R. Kelly and #MeToo, this drama hits home. The limited run ends March 17.