25 Next Generation Broadway Divas Singing Their Absolute Faces Off 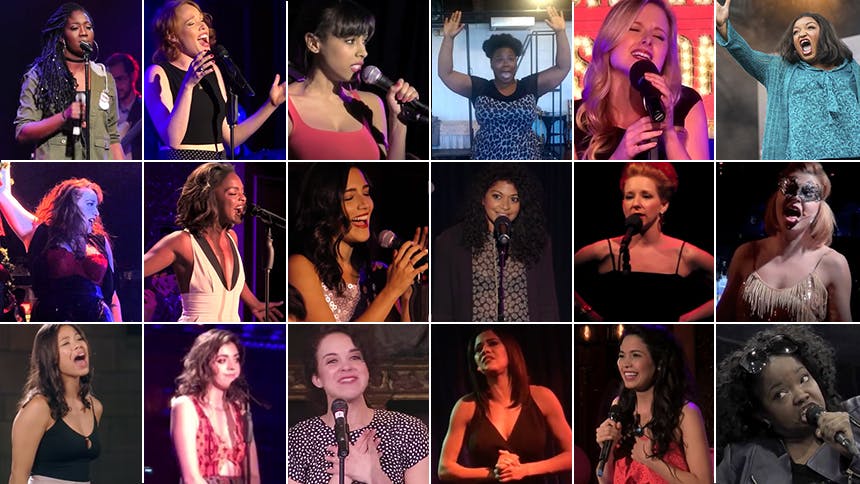 Let’s talk turkey: these ladies have got next level voices and we’re going to be listening to them for years to come. The only criteria to make the cut is crazy-good talent and you can’t have had the final bow in a Broadway musical. (Sorry Lindsay, Betsy, Cynthia, Laura, Sierra, Jessie, Ariana, etc, etc!)

Samantha Massell Sings “But the World Goes Round”


Ultimate 🙌 🙌 moment: I never thought I’d like anyone other than Liza but Fiddler on the Roof and upcoming Rags star OWNS this—like the way Patti now owns “Ladies Who Lunch” owns it. Just get ready for 2:54.


Ultimate 🙌 🙌 moment: I’ve long been obsessed with this former Glee and Hamilton star’s killer voice (and that Aida clip!). Listen to her slay this big Memphis moment from 2:02-2:30 like it’s NBD. W.T.F.


Ultimate 🙌 🙌 moment: You might remember Tiffany from her viral Dreamgirls video but now she’s all grown and she needs to be on B’way. This is pure church! I’m a convert and you will be too. Picking one part to highlight was tough, but try 1:36-2:17.


Ultimate 🙌 🙌 moment: There’s a good chance these ladies are going back to London and we won’t see them for a hot minute and that’s a true heartbreak ‘cause no one sings like them. I could write a college dissertation about everything that happens in Rachelle’s moment at 1:40-2:12. Then at 3:26, Eva the Diva proves she’s not here to play, she’s here to slay. (Also, I know what you're thinking and technically The Engineer and Tam bow after Kim…)


Ultimate 🙌 🙌 moment: Joanna makes her deut as Peggy/Maria in Broadway’s Hamilton, and she has a one sick, soulful voice. I legit lost my breath during this performance. There are gorgeous, rich low notes in the beginning but then that “slam down the iron/flat” moment at 3:15! I full-out applauded at the end…at my desk.


Ultimate 🙌 🙌 moment: Choosing one Alysha video for me was like choosing a favorite Golden Girl, practically impossible. The whole thing is a praise hand, but esp. all the growls and flair after 1:57.

Marisha Wallace Performs “And I’m Telling You” from Dreamgirls


Ultimate 🙌 🙌 moment: The West End’s newest star brings this iconic song to the next level. I hope New York audiences see her in the transfer. Let’s just talk about what she does once he leaves and she’s alone beginning at 2:13.


Ultimate 🙌 🙌 moment: I never thought I’d hear a better Rocky Horror than the last B’way revival but when Emma got to 1:03 my jaw legit dropped and I nearly welled up. Then at 2:30, she became my new queen.


Ultimate 🙌 🙌 moment: I’d buy an album put out by the Charlie and the Chocolate Factory scene-stealer. Get ready for 2:21-3:02.


Ultimate 🙌 🙌 moment: Total star with such a distinct voice and she sells a lyric like Bernadette Peters. Just the beauty of 1:35—the whole “love’s a play” section kills me.


Ultimate 🙌 🙌 moment: The Beautiful, Heathers, and soon-to-be Mamma Mia! sequel star is the real deal. She owns this song—get ready for around 2:20.


Ultimate 🙌 🙌 moment: The acclaimed NY cabaret staple needs a big break ‘cause this talent is truly singular. Who else on this list sounds like this? No one.


Ultimate 🙌 🙌 moment: The Wicked and Aladdin star brings such a joy and warmth to this Lin-Manuel song. Then she totally soars at 2:25.

DeLaney Westfall Performs “Love You I Do” from Dreamgirls


Ultimate 🙌 🙌 moment: The current Kinky Boots star serves superhuman vocals taking on Ms. JHud like that. Grab onto something sturdy for 1:34-2:06.

Alexandra Silber Performs “Vanilla Ice Cream” from She Loves Me


Ultimate 🙌 🙌 moment: The song just sounds perfect in her voice, and the former Fiddler star had me grinning from ear to ear during the comedy bit at 1:25. Also, come on with those end notes from 2:55 on.


Ultimate 🙌 🙌 moment: Both of these ladies are gearing up for major moments (and some nominations) this season as Gretchen and Regina in Mean Girls. Hello, 1:40.


Ultimate 🙌 🙌 moment: The Prince of Broadway standout is this fall’s big obsession and hearing her do Audrey II left me dead. Wish there was video, but listen to 3:32, so worth it. She’s so fierce.

Barrett Wilbert Weed Sings “If It Makes You Happy”


Ultimate 🙌 🙌 moment: This Heathers and Mean Girls star is seriously beyond. I’m obsessed with her “Coffee” cover but had to do this ‘cause of 2:45-3:25. #ICantWaitForMeanGirls

Patrice Covington Sings “All At Once”


Ultimate 🙌 🙌 moment: The Color Purple standout better come back to B’way soon. Comic timing and a voice like that? That was like listening to Whitney.


Ultimate 🙌 🙌 moment: The current Spamilton star has some set of pipes. Every time she sings the word “maybe” I wave a praise a hand. Come through 1:45-2:15.


Ultimate 🙌 🙌 moment: It’s crazy to me this insane talent has not been on Broadway yet (and she has a full soprano happening in that big voice too)! I fell in love with her talent at this concert—how could you not from 2:15-3:00.

Nasia Thomas Performs “Ain’t Nothing But a Kiss” from Memphis


Ultimate 🙌 🙌 moment: The Waitress and Heathers standout needs a role worthy of this super unique voice. All those layers, all those shades, then the power at 3:42.


Ultimate 🙌 🙌 moment: I’m obsessed with this Hamilton, Shuffle Along and Soul Doctor star, and her singing Beyonce at 4:22-4:53 has put me on the fall for the day. Goodbye.