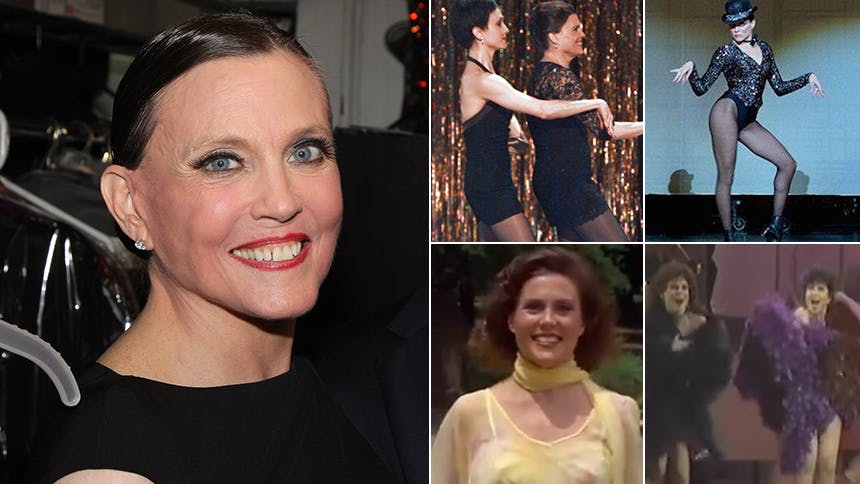 BroadwayBox caught up with the four-time Tony nominee (who won the Tony for Best Choreography in '97 for her work on the now-historic Chicago revival) to get the stories behind some of her most beloved video performances.


This night was wonderful! I had won my Tony and Bebe had won hers, so we were two happy women up there—and I think it showed! It was one of those blessed nights. I look at it and I was very grateful to the producers of the Tonys—they really shot it beautifully and lit it beautifully with that starburst backlighting. That was a true festival. [The Tony Award] is one of the few awards I have out in my library/family room. It was so special, especially for someone like me where Broadway and live theatre is big love of mine. My first love was ballet, but to make it on Broadway as a choreographer and as a performer just meant everything to me, and that Tony means everything to me. It means I did a good job. When I thanked Bob [Fosse], I really meant it. He gave us an amazing gift, as did John and Fred. Three very bright men sat down and made a wonderful musical, and I was glad I came up to par. It’s still such a rewarding time in our lives.


That was wonderful! We had been shooting all the fantasy numbers at the Astoria Studios out in Queens, which is like walking into history. Those were the first studios ever made before everything went out to Hollywood. To shoot that, we lived in this world for a good couple of weeks, and the only thing that was a downside (and it was minimal) was that it was on concrete floors. By the end of it all (especially where Liz and I are on pointe backing up Leland) my feet got so badly bruised! There are a lot of nerve endings at your feet, so they were so sensitive I couldn’t even have a sheet while I was sleeping. I didn’t know what to do—whether to ask for something that would numb my feet, but then I said, ‘No, I wouldn’t be able to dance!’—so I just put my boots on and kept pounding my feet into the cement floor. They went numb but I could still feel the floor under my feet. It was such a wonderful number I wanted to make it work heck or high water, and losing time (especially on a movie) is so costly that one does these desperate things. Now, I look at it and I like it—bruised feet and all.


We shot it all in one day, the scene and the number. It was like an easy birth. It couldn’t have been more ideal. It really was spring, and it was a gorgeous day, and it really was snowing cherry blossom peddles. It was actually unreal in a very positive way. They were kind to [give me the opportunity to dance in the film] and have that one moment for myself. There was supposed to be a big fantasy scene of my watching Camille at Radio City, and we shot some of it. But it was in the first couple of weeks, and Radio City was very hard to shoot in, and we had several scenes to shoot there, so we ran out of time. Basically, I would say, it probably worked more in my favor because I got a song and a dance; so it was one of those things where I got sad and then I got very happy. I said, “Oh no, they’re cutting my number!” But it actually turned out better.

“Let Me Entertain You”, Broadway Sings: The Music of Jule Styne, 1987


PBS did a series of shows on various composers and their catalogues. All of us had worked for (and loved dearly) Alan Johnson, the choreographer. He asked us to do this and we just had a great time. He served us beautifully. In getting the strip part right (where all of the sudden we go into the gowns), that was a real delicate transition. It was the only cut in the number and a very important cut—it had to look like magic. Mine was underneath my mink coat, just pinned back, and, at one point, my dress caught on something and it didn’t work. I was afraid I tore it and it wasn’t going to go back together. So, I was getting really nervous, and we’re all getting uptight, the three of us. Then Chita says the perfect thing, ‘Uh-oh, it looks like three really nice women are going to turn mean.’ And we just cracked up. Chita was first rate at keeping us cool. It was the perfect thing to say—we are three very nice women—and she just cleared the air so brilliantly that the next take everything was perfect. You can see it in our dancing. We are so happy and having fun.


This number was done later, a few years after I had left Over Here! My original partner was John Mineo, but I believe he was living in Japan at the time, so I asked Don Correia if he could do it—he’s a really spectacular dancer and a really great guy. We had done a performance at Wolf Trap for American Dance Machine, and that got good reviews and then Merv asked us on to do that portion of “Charlie’s Place”. I was very pleased to see it after all that time. You never know with how well you’re going to do with the limited space in a TV studio, and you don’t have the whole number to warm it up before you get to the Jitterbug section. I really didn’t want to disappoint Patty Birch (the choreographer of the number). I felt good at the time but I was pleased to see it now—I’m not sure I ever saw it. I don’t really like seeing myself but this is one where I say, ‘Oh, that’s not so bad.’


I was up in Toronto with Jeff Hyslop, a huge dance figure at that time. We had learned A Chorus Line together, but I was going to go to the New York company and he was going to Canadian company. He was wonderful! He is so gifted. I don’t think we could get the rights to do Bob’s choreography, but Jeff did such a good job in emulating Bob’s work and making it look good on me, as well as on him, while respecting Bob’s work. It’s not easy to do your version in the style of somebody, and I thought he did an awfully good job. It was such fun dancing with him. It was a week-long shoot with all these luminaries of dance, and there’s nothing better than being with your own, so to speak—in a studio full of dancers, there’s going to be some laughing going on. It was just a joy.