Eva Noblezada Opens Up About 10 Things She Learned About Herself, Life, & Showbusiness During Her Years as Kim in Miss Saigon 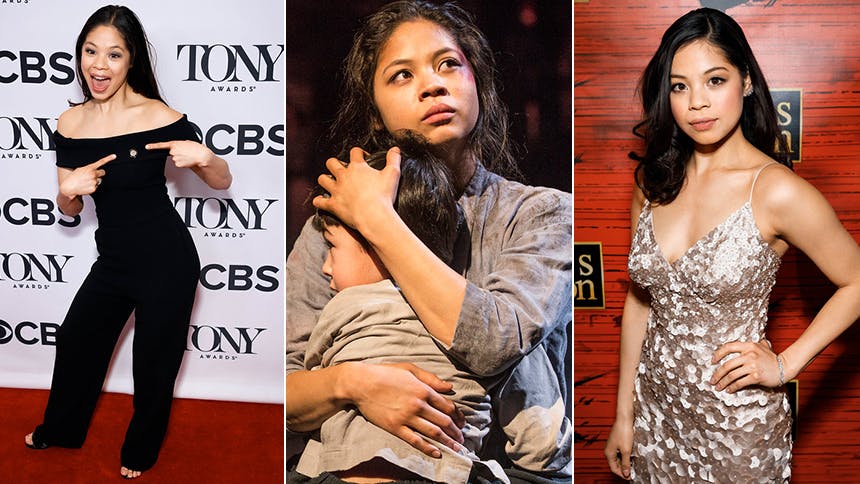 . She sings the house down; she breaks your heart; and she is an unequivocal star.


Everyone knows the story about being discovered during the Jimmy Awards, moving to London to open Saigon and finish high school there, and then her journey to Broadway. We spoke to Eva to find out some parts of her story we don’t know. Scroll on as Eva Noblezada opens up about body image issues, comparisons to Lea Salonga, and much more.

What was hard to learn when you first arrived in London?
I’ve learned to be a responsible, independent young woman who is Mexican-American and Filipina. When I started, I had never lived abroad or received a pay check before. I never worked in a professional production before. I had to learn how to control emotions when I’m supposed to be this leading lady at 17. I had a lot of self-esteem issues, like anyone at that age. It’s a struggle I have been trying to get over for years now, even still today. I had an issue feeling unqualified and undeserving to be where I was at that point—I came straight from high school. The way I lived was messy. I didn’t know what I was doing; I was making stupid decisions here and there, but then I’d come to work and have to be a professional and have this pressure on me. It made me feel like crap, like I didn’t belong there. My passport picture taken when I was 16, I looked completely different. My health was not priority to me; my diet was not a priority to me; my physical fitness was not a priority to me; and it showed. It showed in my energy and in the way that I could easily let my psychological state overpower my entire being. If I was feeling down or hideous or fat, it would take over my entire week.

That’s a lot to handle at that age.
I’m going to be honest because I feel like it should be normalized anyway. When I moved to London I had a lot of voices trying to get me into shape. I was put on a diet. I was put on Accutane because my skin got bad—it’s a new country with different water and air and my skin got terrible. I was put on the highest dosage of Accutane (which is linked to depression) and I was put on the pill to help my skin, and I was put on a box diet to lose weight. Everything about my body at 17 was wrong, and I didn’t handle it well. I’m an actress—I’m really good at faking it but I struggled with bulimia for two years living in London. I started seeing a psychotherapist my second year in London, who honestly helped me through the worst.

I had body dysmorphic disorder, so there’s a muscle in your brain that you train over and over to look in the mirror and see yourself as something that you’re actually not. For example, I could look in the mirror now and see a chubby Eva—and I know I’m not. I still see myself sometimes as the girl who moved to London—the big girl with stuff hanging over her jeans. I know now. I want to give myself a big hug because it was normal. It’s normal to have baby fat. It should be an open discussion and needs to be normalized.

My bulimia was really bad. I would be sick four or five times during the show. I would get bad panic attacks during the show and after the show. My Company Manager, Katy Bryant, was my guardian angel there. She always knew what I needed. Jon Jon obviously is the older brother I never had. He was there to be supportive on and off stage. A huge part of the credit goes to my boyfriend. He was there for me and he’s still there today. He’s so patient. It took a lot of strength for him to watch me do this to myself and still be there for me as an emotional rock. That first year and a half was so difficult.


With that kind of struggle going on, how in the world did you manage a demanding role like Kim?
It took me a while to get Kim into my body and my voice. Yoga saved me, the gym saved me, and a healthy diet saved me. Before I learned those things and incorporated them into my daily routine, I had to take a week off because the bile had really, really ruined my throat. I would go home and not speak for the whole day and then do the show again. I got tonsillitis twice during the first year and half. One time a doctor had to put a scope down my throat, and that’s the day I knew I had to see a psychotherapist. I thought, “Oh my god, what have I done?” Then after that I was on the mend. It was the hardest process but I needed to learn it so that I was prepared for my life today. Now the show is physically in my body and my voice.

How did you find the balance of West End leading lady and a teenager living abroad? Taking Kim on and off like a costume?
I had to learn work-life balance. I was a different person for a really long time because I wouldn’t allow myself to be Eva. I just wanted to be a better performer. I almost forced myself to be Kim sometimes outside of work because I was scared to be Eva. I thought, “At least I have Kim. I could go to work and be Kim but Eva is just an absolute mess. With Kim it’s a performance.” But I had to learn how to drop her at the door and be myself. My friends and yoga saved me. It’s also about not letting myself speak disgustingly to myself. You need to be loving and kind to yourself.


Cameron Mackintosh put you in the ensemble of London’s Les Miserables before you began in Saigon. What did you get out of that experience?
I made a lot of friends at Les Mis. It was the little time of rest I had before all the major pressure hit. I didn’t build up my anxiety issues during my three-month stint in Les Mis because I was too busy having fun and learning about London. I was 10th whore to the left. I had no stage pressure to be amazing. The whole purpose of that was to learn how the theatre works, how the West End works, the lingo they use backstage, and getting rehearsal time and show time in my body. I think it was to break the stage fright and it was a smart move on Cameron’s part. I felt a lot more comfortable when I went to rehearsal [for Saigon].

What’s awards season like for you? You were not nominated for an Olivier in London but you (deservedly) got a Tony nom, so this part is new.
I’m not a huge fan of how shows revolve around awards but I completely understand why. To be honest, it’s been enjoyable and I’m grateful for the people I’ve met so far. I totally fan girl. I just want people to know for me personally, I don’t base my performance off awards. My goal isn’t to impress the voters in the audience. I hate plugging myself. I want the show to get recognition. It’s a massive honor though. I don’t want to get it twisted. To be nominated with these amazing women is incredible.

How did you overcome or make peace with the comparisons to original Kim, Lea Salonga? Was it tough for you?
I’m always cool obviously with people saying, “You sound like Lea.” But I had trouble in the beginning, obviously in London, not only with the pressure of being a leading lady but also you hearing “you’ve got big shoes to fill.” It’s like, “Gee thanks!...” I didn’t realize the pressure it would take on until the show was on. I get there’s a comparison. I understand why and how. It’s a revival. But being an actor, it’s difficult to be compared. Finally, I said, “Ok, Eva, let it roll off your back. You and Lea are completely different people and your Kims are completely different.” I’ve never had anything but the utmost respect for Lea. She’s the most real woman. She’s legendary, but I didn’t watch her performance and take notes. How would she feel if the revival Kim watched her performance and took notes and took creative things she created. That’s not fair. I wanted to make sure everything I did came from myself—and I know actors will understand that. It’s an honor to know her and follow in her footsteps, but in my own shoes.

What’s it like knowing your Kim will live on forever because of the HD Broadcast?
It’s weird. I never really think about it. I think maybe for me because I don’t like watching myself back. I’ve seen the movie twice and I’ll never watch it again.

What was it like returning to the West End after Saigon as Eponine in Les Miserables?
This is going to be really controversial y’all but I don’t think I’ll have as much fun on any other show as I did playing Eponine. She was so fun. It’s going to be hard to top that. She’s just me. I could be gritty and sit like a boy. She’s not pitiful (like she’s sometimes played); she’s scrappy as hell. Let me push people around and have dirt on my face and wear boots. I’m not saying it was easy. But because it’s such an ensemble show, there was never a time I was alone on stage except “On My Own”. The whole show didn’t rest on me.


What do you know now about the business that you wish you knew when you started this journey?
I wish I had known I could say no. I wish I knew it was just business and you can say no. You can’t spread yourself thin. I don’t know. I did six shows a week doing what I did to myself in London. It was so unhealthy and I will always be an advocate for people who don’t think they are good enough. I wish I could look at the person who said I needed to lose weight and say no. You cast me looking like this. Now I feel stronger. I have my armor. Without this period in my life I wouldn’t be who I am today.

Don’t miss Eva Noblezada as Kim in ‘Miss Saigon’ at the Broadway Theatre.