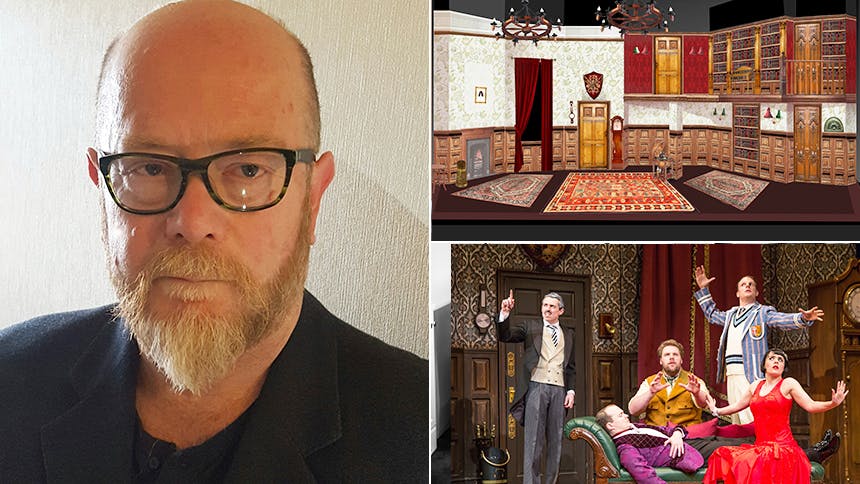 . His set is a character in the show and is as vital to the piece as any actor onstage.


Scroll on as Nigel Hook shares with BroadwayBox 12 secrets about his Tony-nominated set.

I came on quite late. They already created the show as a 45-minute piece for the Edinburgh Festival. They built their own set—you don’t meet actors who do that a great deal. They built a version that’s basically half of what we have today—the three flats: the window, the fireplace and the door. When I came along it had already been at the Trafalgar Studios (and they were doing fabulously dangerous things). They knew exactly what they wanted and that’s quite rare. They had this idea that they had to extend the room for a larger scale production. The whole of the other side of the stage is brand new but the boys came in with a pretty clear set up of what that was to be. I added to the mix, which is what you do as a designer. You throw something out and they catch it and throw it back at you.

The dog has been with the production from the very beginning. Being a designer, you think, “Oh, let’s have a few more pictures that could fall off, just to decorate it more in the style of a reasonably bad production of a murder mystery.” But they stuck with the dog on its own because, as far as they're concerned, it’s their lucky dog now. We contacted the original artist who lives in Scotland, and she gave us permission to use it. She’s very interested in how this dog is getting around the world.

I added in Pantomime bits like the shield falling. It’s all based on little Victorian tricks and gags. For example, the final bit is quite a common standard pre-silent movie.

What changed the most is the left side of the stage in particular. We tried doors in different places and other elements that could work, but they pretty much have come to be like that because of necessity. At one point, they wanted to make the lift much more prominent. They wanted a glass lift that went up and down, so you could be seen in it and everything would be gagged off of that. But to have one thing you must lose one thing. You play a visual chess game.


Everything has to be safety checked, and we scrupulous on safety. You have to treat yourself like an idiot to be able to assure that you’ve planned for what could go wrong.


I throw the odd personal thing in. Somewhere my initials are hidden amongst that wallpaper.


That horror that looks like bathroom wallpaper from the 1970s. I have a wonderful program that will give me templates that I can color, enlarge, and distort to be able to create the wallpaper new every time. Each different production has different wallpaper.

For the table in the study upstairs, we went through every desk in the UK pretty much. They get replaced quite regularly. Someone will want a little desk like that someday and there will be none around. We found the optimum desk that is right for that particular sequence so I’ve drawn the plan out for that and we will use that as the future template. But we found the reproduction costs more than the real thing.


The clock is completely bogus. It’s a new clock for the Broadway level. Our London clock is very much like the rest and blends into the set more, but this time I wanted to pop it out. It’s a much lighter wood and nearer to the other elements of furniture. There’s very few pieces of furniture onstage but they have to be doing very specific jobs at a particular time. You can’t trust sitting on any of it really.


The downstage coffee table for the fireplace is the ugliest thing in the world and gets battered regularly. Sometimes it gets replaced between the act. We keep spares for everything.


Chris Claydon makes all our curtains for Broadway. He also does The Phantom of the Opera ones, so they got a little fancier.

Behind the set is a total nightmare. It’s totally foul back there. But everything is safe and in its place. To the untrained eye it’s complete chaos and it certainly is during the show. Everyone has their own track that they have to keep to—you step away from your track and you’re in someone else’s. It’s down to seconds back there. We’ve taken a handrail away so they can simply drop from one level to the other. They are athletes. I’m in awe of them always. You think you’d never meet another kind of actor, being at it this long, but they are.

See all the crazy things Nigel Hook's Tony-nominated 'The Play That Goes Wrong' set can do live at Broadway's Lyceum Theatre.

The Play That Goes Wrong
Discount up to $16
Newer
The Avenue Q Puppets Have Some Tony Awards Advice for the 2017 Winners
Older
Exclusive Photos! Go Backstage at Broadway's Hit Musical Groundhog Day
Sign up for BroadwayBox Discount Alerts