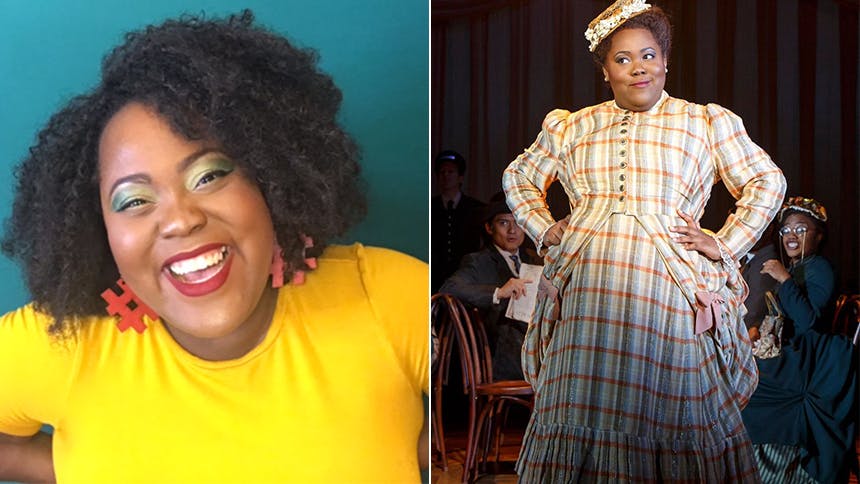 The Wild West never sounded as soulful and fun as it does in Playwrights Horizons' new off-Broadway musical Bella: An American Tall Tale


BroadwayBox gets to know Ashley a bit better as she talks about her breakthrough performance, defying theatrical types, and the importance of a Michael Jackson dance party.

1. Physically, I prepare for marathon of Bella by:
Haha. It's a marathon indeed! I definitely have to do a full-body stretch before the show...but the one important physical thing I do to prepare is to have a dance party with my dressing room mate, Kenita Miller to "You Wanna Be Startin' Something," by Michael Jackson...it gets the blood pumping and never fails to get us ready for this ride!! Thank you, Michael!

2. My big dream:
Hmmm, my dreams are always changing, and I've been so blessed to have lived a few of them. I think a dream that has manifested out of the current dream I am living as Bella...is to bring Bella to Broadway. I think it's such an important story that many people need to see. These are the stories that never get told, never taught and never celebrated... we need this, especially in today's world. We just need a few people willing to help us tell this story...nothing is impossible. hint hint. 😊

3. My favorite place in the world:
The stage. Haha. Is that corny? It's true though...it's my playground, my church, my therapist office...where I fall in love...where I breathe... where I can just be...it's my everything. Ok yes....that definitely sounds corny!

4. The biggest tall tale I told a stranger to get what I needed:
Oooohhh—Haha—this is a good question! I don't know if this counts, but I definitely told this beautiful man I saw standing outside this restaurant that God sent him to me in a dream, told me to meet him at that particular moment, and give him my number because we were meant to be. Needless to say....he never called. Haha.

5. The album I cut my teeth singing along to when I was younger:
I was obsessed with this R&B singer Jesse Powell in the late 90's/early 00's... I'm pretty sure I stole my sister's copy of his second album and played it to death!! My favorite song was "You," and "You Should Know." I was going to marry him.

6. Role I wanted to play more than anything in high school or college:
Hmmm, this is a hard one actually. I wasn't as serious about this career in high school until my drama/dance/English teacher, Mr. Ed Murray, introduced me to Ragtime The Musical my junior/senior year. He pretty much solidified my desire to perform professionally...so I would have to say Sarah in Ragtime.

7. The biggest pinch-me moment professionally so far:
I think the first was getting a chance to work with one of my favorite choreographers, Sonya Tayeh 🙌 on a brand new musical.....and then of course starring in my first off-Broadway show!? Hahahah....I don't think anything can top that ...(so far..)

8. My most memorable audition story:
It was about two years ago. I was working at the Oregon Shakespeare festival as an ensemble character/dancer in a new Jeff Whitty musical ♥ ...and I was auditioning for The Wiz for the following season for director Robert O'Hara. My initial thought was I was going to audition for one of the witches or perhaps The Lion...as I finish my two songs Robert asks me if I knew any Dorothy songs. I was a bit surprised honestly because I never thought I would be considered for a lead role, let alone Dorothy. She's physically not my type and it went against everything the theater world told me I could be. I ended up singing "Home" for the creative team and something magical happened. I think somewhere deep inside I've always connected with her...and well...Robert thought so too 😊 and I played Dorothy at the Oregon Shakespeare Festival 😊

9. A 110% true story that rocked my world the first time I read it:
I think that would have to be The Secret Life of Bees by Sue Monk Kidd! I read this book my sophomore/junior year of high school and it just stuck with me. The story itself is absolutely beautiful and the way she writes her characters are like pure poetry!

10. Role I've already played that I would love to revisit again:
I would love to revisit Sylvia in All Shook Up again (I've played her three times...) because I think the older I get the more I understand her and the show itself is so much fun. Although, I think it would be interesting to play her daughter Lorraine for a change. Haha. I'm more interested in playing the roles I'm not expected to...I'm gunning to be the first plus size Lola in Damn Yankees...why not? 😊