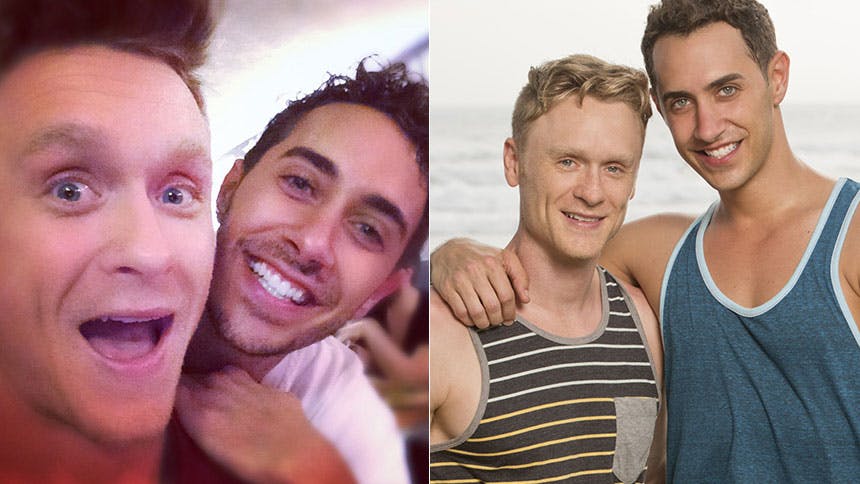 After competing on CBS’ cut-throat reality program Survivor, Broadway Boyfriends Josh Canfield and Reed Kelly can pretty much handle anything, including a two-night concert at New York’s 54 Below. In their new show From Broadway to Survivor (January 27 & 28), the guys will entertain with an evening of showtunes and stories about reality TV and the word of NYC theatre, and which is harder to survive. So read on to get to know upcoming Dr. Zhivago star Mr. Canfield and stunning Spider-Man favorite Mr. Kelly a little bit better.

1. Showtune I’d use to describe Reed Kelly:
Whoa, so many come to mind. I'm gonna say "Life of the Party" from Wild Party.

2. My can’t miss reality TV show is:
Um, Survivor, of course. :) Besides that it's Project Runway.

3. First meal after returning from Survivor:
PEANUT BUTTER and BEER! Wait, is that a meal? haha!!

4. Desert island Broadway cast recording:
Into the Woods - Original Cast Recording of course. I mean how can you go wrong with Bernadette, Joanna, and Chip! (Also Bridges of Madison County.)

5. Famous Russian you’d like to have a vodka with:
Oh wow, ok, hmm, I guess I would say Anastasia because I bet she would have some amazing stories. Also Mikhail Baryshnikov since Reed is a huge fan.

6. Song from my 54 Below set list that describes how it feels to make my Broadway debut this spring:
I see what you're doing, trying to get me to give away the secret set list. Ha! Well it worked. I'd say “I Got Life.”

8. My NYC happy place is:
My apartment, Grey Dog (Chelsea), Crunch gym, Schmackery's, and many more. I love NYC!

9. I knew I wanted to be a performer when:
My parents put me on stage with my four brothers when I was very young and we all sang together, sort of like the Von Trapp's. I knew I wanted to have a career in theatre when I heard the cast recording of Phantom of the Opera.

10. Character from literature I most relate to:
The Count of Monte Cristo because I have been wronged so much and I plan to take vengeance out on all of them. HAHA, no but for real, perhaps Puck in A Midsummer Night's Dream. He's playful, mischievous, mysterious, and powerful. At least I'd like to think I can relate. :)

1. Showtune I’d use to describe Josh Canfield:
“Suppertime” from You’re A Good Man Charlie Brown. (Especially after starving practically to death with him on a deserted beach in Nicaragua this summer!) He’s a guy who loves to eat; and the song is super high energy and fun, just like Josh.

2. My can’t miss reality TV show is:
Number one is most definitely Survivor, followed closely by Project Runway.

3. First meal after returning from ‘Survivor’:
Nutella and peanut butter straight out of the container with a spoon. #noshame

4. Desert island Broadway cast recording:
I think currently it would be A Gentleman’s Guide to Love and Murder; it’s so fun and they’re all so danged talented!

5. Superhero you’d like to have a beer with:
Superman. Especially if it’s the Henry Cavil Man of Steel Superman.

6. Song from my 54 Below set list that describes how it feels to have been on Broadway for the past 10 years:
“What More Can I Say” from Falsettos.

7. Toughest part about dating a fellow Broadway actor and the best part:
Personally I think the toughest part about dating a fellow actor is that neither one of us has that stable 9 to 5 job that will always put bread on the table every night for the next thirty years; it’s a bit less reliable than that. But the parts part about it is we both understand our business and can be there for one another in both the ups and downs.

8. My NYC happy place is:
Kodama Sushi on 45th. I’m kinda obsessed with it and have been for years, not gonna lie.

9. I knew I wanted to be a performer when:
I feel like I've pretty much always known it. I’ve always loved to make people laugh and to see them smile. Performing always seemed to be the quickest way to making this happen.

10. Character from literature I most relate to:
Scarlett O’Hara. She may have a flare for the dramatic but at the end of the day she always stays connected to her roots and gets the job done to provide for those she loves. Plus, she looks fantastic while she’s doing it … who doesn’t love that?

See Josh Canfield & Reed Kelly in ‘From Broadway to Survivor’ at 54 Below on January 27 and 28.