10 Plays, Concerts and Musicals You’ll Fall in Love with This February 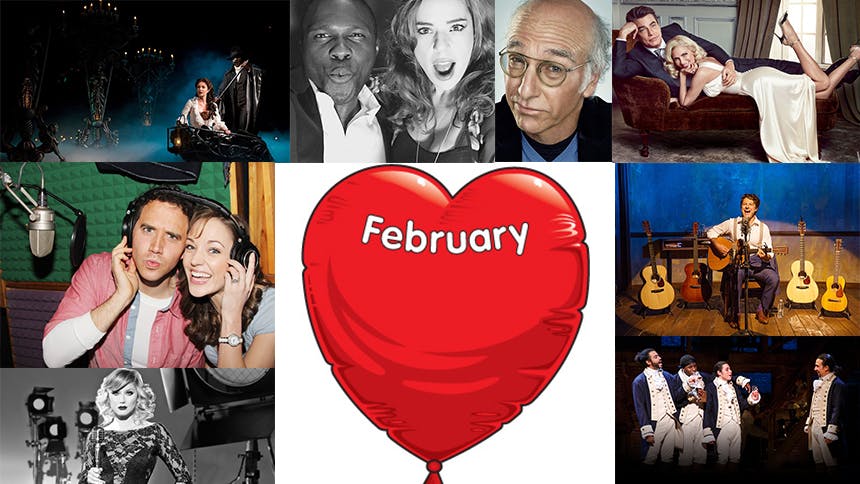 It’s February, which means love is the air—or you’ll make yourself sick eating chocolate, drinking wine and watching The Last Five Years movie on demand. Below, we look at 10 plays, musicals and concerts you’ll love this February no matter what your relationship status on Facebook.

1. So in 2015 BroadwayBox’s resolution was to pick one show each month and make it our Show of the Month. Last month was Kinky Boots because we were celebrating our new discount to the Tony-winning musical, and this month we’re all about The Phantom of the Opera. You still have a little time to see Norm Lewis before James Barbour assumes the mask Feb 9. Newcomer Julia Udine is an amazing Christine, Jeremy Hays is a totally swoon-worthy Raoul and Michele McConnell is still cracking up audiences as over-the-top opera diva Carlotta. It’s time to head over to the Majestic Theatre, watch the chandelier fall and let that gorgeous Andrew Lloyd Webber score fill your heart.


2. Jumping from Broadway’s longest running musical to its newest play, Larry David’s Fish in the Dark begins performances at the Cort Theatre, and if you can get your hands on a ticket, take it! The Seinfeld and Curb Your Enthusiasm creator finds the funny in a family dealing with a death as only Larry David could.

3. Chicago is red hot this month thanks to two new scintillating sinners, Jennifer Nettles and Carly Hughes. The Grammy-winning country music star takes on Roxie Hart, while Broadway’s new leading lady puts her spin on Velma Kelly. Either way, that Kander and Ebb score is going to be sung like there’s no tomorrow at the Ambassador Theatre.


4. Hamilton. It’s all everyone is talking about (well, that and snow). Somehow it’s a contender for Best Musical—even though it’s downtown with no announcement or plans for a transfer yet, but somehow it’s that good. This tweet by the great Andrew Lloyd Webber should be the ad for the inevitable uptown transfer.

5. The thing about the new pop-rock musical One Day is that there’s definitely that Rent/ Spring Awakening energy around it. A hot young cast of newcomers, a modern accessible score that talks about sex and drugs and a downtown off-Broadway engagement that is sure to cause some buzz. Previews begin Feb. 7 at the 3LD Art & Technology Center.

6. It’s well-worth going to see 50 Shades! The Musical just to see Amber Petty’s absolutely hilarious performance as Anastasia Steele, but maybe you’re planning to see the film this month and don’t want to overload on kink. So here’s what to do, check out Petty’s solo show We Don't Need Another Hero at the Duplex on February 8. The description should be enough to seal the deal: “With a collection of songs from children's cartoons, bad 80's movies, and pre-Gwyneth Paltrow Coldplay, Amber reflects upon her life as a weirdo.”

7. All aboard! The first Broadway revival of the madcap musical comedy On the Twentieth Century is leaving the station and you don’t want to miss taking this adventure with Tony winner Kristin Chenoweth, Golden Globe winner Peter Gallagher and Tony nominee Andy Karl. The original production won Tony Awards for John Cullum and Kevin Kline in the Gallagher/Karl roles, and goodness knows there’s already award buzz for Cheno…and previews don’t even begin at the American Airlines Theatre until February 12.

8. Back by popular demand, Benjamin Scheuer returns off-Broadway with an encore run of The Lion at the Lynn Redgrave Theatre. The deeply personal solo musical follows Scheuer’s complicated relationship with his father and his own battle with Hodgkins Lymphoma at age 29. Needless to say, you’ll be moved.

10. Okay, it’s time to talk about Valentine’s Day and your non Last Five Years options. We’ve narrowed all the V-day related shenanigans in Manhattan down to the two you really have to see, hear or choose between. On February 9, the incredible voices of Alysha Umphress and Joshua Henry will sing Romantic Duets at 54 Below. Then on February 14, Laura Osnes and Santino Fontana reunite to sing A Broadway Romance with the New York Philharmonic at Avery Fisher Hall. And either concert can be enjoyed with a hot date or a glass of wine and your memories.