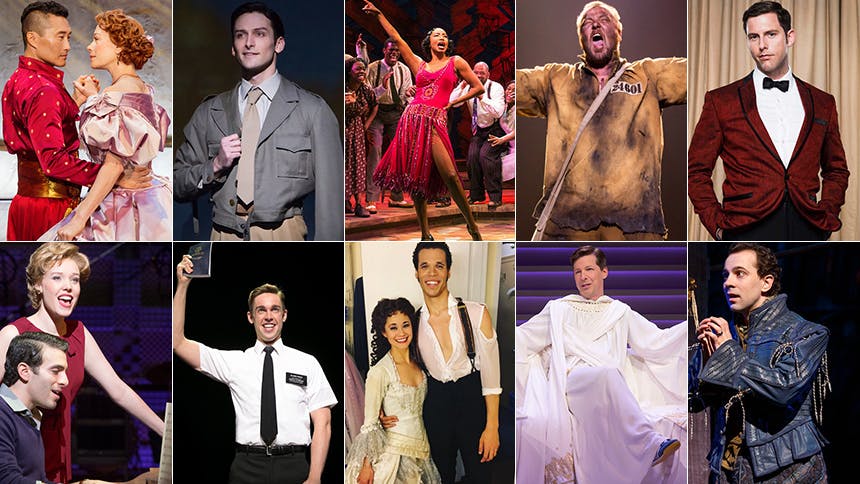 It's that time again. Time to shine a much-deserved spotlight on 10 Broadway replacement stars who are just slaying the house down—presented alphabetically.


The Lost and Hawaii Five-0 star makes a killer Broadway debut as the King of Siam. He’s so funny and interesting, and his chemistry with Marin Mazzie is off the charts. It gives you a glimpse of what audiences who saw Yul Brynner must have felt like.

Ali Ewoldt as Christine Daae in The Phantom of the Opera


The first time I saw Ali Ewoldt in Les Miz, I thought, “Wow, a soprano ingénue who is 100% as interesting as a character actress.” Now she brings that same rich palette to the role of Christine. Her and Jordan Donica are a breath of fresh air for Broadway’s longest-running musical.

Heather Headley as Shug Avery in The Color Purple


You could write a three-act play about this Tony winner’s revelatory, heartbreaking performance as Shug, but it’s better to be experienced than talked about. All you need to know is that the hype barely does her justice.

Wynn’s Cynthia Weil is fierce and funny as hell. She radiates, and it’s obvious why Barry Mann falls so hard for this one-of-a-kind dame. (Plus, that voice don't quit!)

Marin Mazzie as Anna Leonowens in The King and I

By gosh, Marin Mazzie is perfection in The King and I. She’s so warm and truly funny. She’s not an uptight British lady in Siam, but rather a fiery woman who could live and thrive anywhere in the world. She sounds glorious and there are shades of Mother, Lilli Vanessi, and Clara that all make this one of the most memorable performances on the list.

Rob McClure as Nick Bottom in Something Rotten!


One of the most talented musical comedy stars working on Broadway right now is in one of the funniest shows in NYC, and that is a killer combination that can’t be missed. He sounds incredible, he’s dancing for his life, and it’s so hard to hate him—even when Omelette is a trainwreck and he’s being mean to everyone around him.


Just when you write off Les Miz thinking, “how could it be better than Ramin or Aflie Boe”, they go and give you John Owen-Jones. There’s something so honest, moving, and lovable about his Valjean that it changes the energy of the revival in the best way possible. If you loved Colm, go see John.

Nic Rouleau as Elder Price in The Book of Mormon

At this point Nic Rouleau has played Elder Price all over the world, and it’s because he’s that good. His voice, comedy, and charm will make a convert of you.

Garen Scribner as Jerry Mulligan in An American in Paris

If someone on Broadway was singing the way Garen Scribner is dancing, you wouldn’t be able to run to the theatre fast enough. His Jerry is so boy-next-door adorable and playful, you can see why he’s immediately so endearing to everyone he encounters in Paris.

Bonus: Sean Hayes as God in An Act of God


Is he technically a replacement or a revival star? Who knows…either way, he’s heavenly and hilarious. And you owe it to the Will & Grace fan inside you to see him.

Jersey Boys
Discount up to 50%

The King and I
Best Priced Tickets