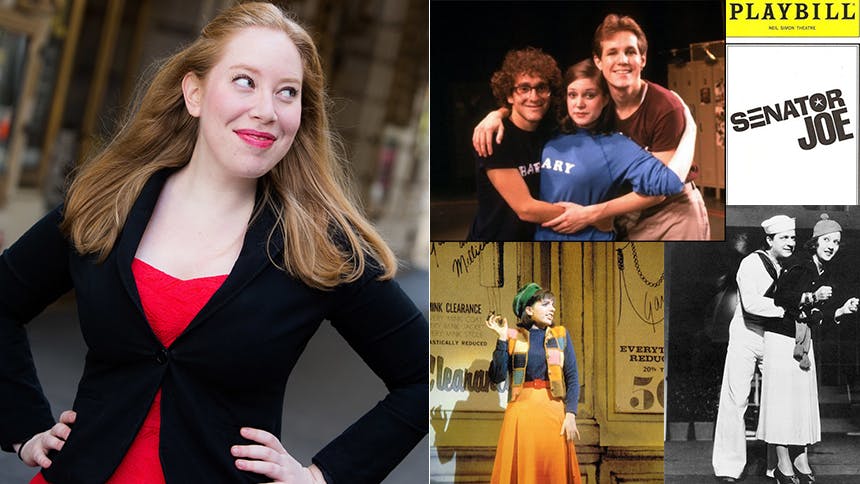 54 Celebrates The Neil Simon Theatre (formerly the Alvin, and the birthplace to beloved musicals Company, Annie, Hairspray and Anything Goes) on June 29th with an all-star concert. BroadwayBox talked to the evening's host, Jennifer Ashley Tepper, to hear from this Broadway historian about the five shows she wishes she could go back in time to see the OBC perform at the Neil Simon/Alvin.

I would love to see this musical comedy smash with a score by George and Ira Gershwin, starring Fred and Adele Astaire—that opened the Alvin (now Neil Simon) Theatre as its first attraction! The musical marked the first time Fred Astaire danced in his trademark top hat and tails and the first time songs like “He Loves And She Loves”, “My One And Only”, and “S’Wonderful” were heard. How thrilling it would be to be transported to the Broadway sphere of 1927 and see first-hand what that was like. Funny Face had a cast of 72! I would arrive early to explore old 52nd Street and experience what every corner of the Alvin Theatre was like when it was first built.


The Anything Goes that we know today, from revivals, is so different than the original Anything Goes of 1934. I would love to see exactly what this show was like when it was first launched. I hope I get to have a high ball with Cole Porter in the lower lobby and that Ethel Merman belts in my face at the stage door following the show. I get a kick out of this idea.

This ambitious 1965 musical, produced by Hal Prince with a score by John Kander and Fred Ebb in their first Broadway collaboration, feels like an essential stop to make with my time machine. Seeing Liza Minnelli carry a Broadway show on her shoulders at age 19 would be priceless, and I'd love to experience a George Abbott directing job first-hand, since he shaped musical theatre so much. This was a dark show, ahead of its time in many ways, and I would also love to see how the audience in the Alvin reacted as its brightly sung tale involving communism unfolded.


My favorite musical of all time is Merrily We Roll Along, so it's no wonder that I'd want to go back in time to experience the original production first-hand. I almost want to use two stops to see both the first preview and the final performance! (They were very different.) Having interviewed and/or spent a significant amount of time with at least half of the original cast members, I can reconstruct what Merrily was like in my head, but nothing could be like seeing it live. I would cheer for the lofty aims of this misunderstood original production of a genius show louder than anyone there.
(An honorable mention to Company— I couldn't pick both Merrily and Company, but if I had another spot, it would be yours, Larry Kert.)


Adela Holzer was born in Spain, came to America penniless, became a secretary, started to make deals of her own, invested in Hair, made 2 million dollars, produced on her own, and went to jail for outrageous incidents of larceny and fraud. Senator Joe was her first project after being released from prison, and it folded after only 3 previews, without ever opening. Reportedly, the cast was often paid in money from a giant sack, and sometimes they weren't paid at all. The fascinating and offbeat musical was about the life of feared Cold War Senator Joe McCarthy, and was written by Perry Kroeger and Tom O'Horgan. The show was originally set to open at the Virginia (August Wilson) across 52nd Street, but that opening was cancelled due to lack of funds. When the funds were procured the Neil Simon was open instead, so Senator Joe premiered there...although its marquee was still across the street (not enough money to move it) and the Neil Simon marquee read: Kenny Loggins on Broadway. Oh to have been in the 3 audiences who experienced this rare moment of Broadway history.

Fun full-circle Neil Simon Theatre moment: I was at an early preview of Catch Me If You Can at the theater when I received an email from Perry Kroeger that he would be glad to participate in my If It Only Even Runs A Minute concert series, and celebrate Senator Joe in story and song. All of Broadway is connected by these buildings that have housed so many different shows!