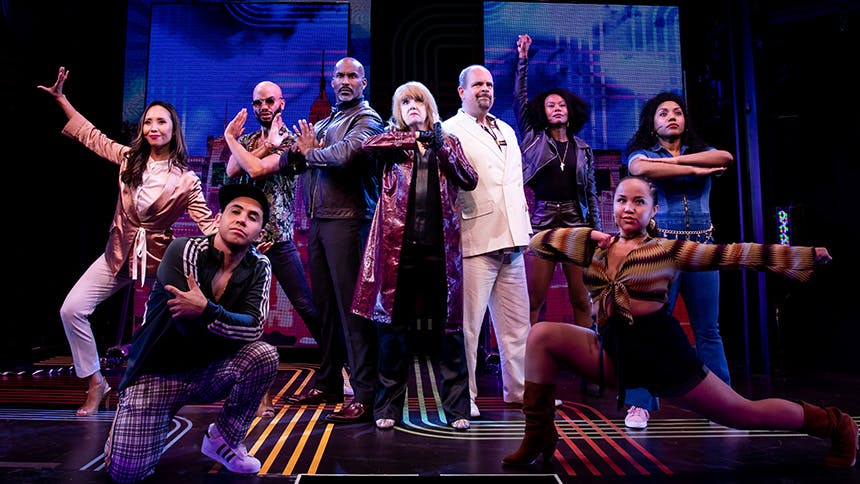 is a must-see for theatre fans worth their salt. Not only does it feature a killer, bop-filled score by the Tony-nominated composer of Be More Chill and a hilarious, campy book by Jason SweetTooth Williams & Lance Rubin, but every single performer in the show’s company is serving it at 110%. It's remarkable.


Broadway Bounty Hunter is a star vehicle for the always iconic Annie Golden and features the hilarious two-time Tony nominee Brad Oscar, as well as an ensemble of young performers who are each a star in their own right on that stage. Scroll on as we look at two videos from each of the sensational performers working their asses off in Broadway Bounty Hunter.


Annie Golden is the unique Broadway star who audiences know and love for her performances in Hair, Assassins, The Full Monty, Xanadu, Violet, Leader of the Pack, On the Town, Violet, and, of course, Netflix’s Orange Is the New Black. Truth be told though, she’s never sounded better than she does in Broadway Bounty Hunter. I could listen to her sing Joe Iconis’ “Spin Those Records” all day long.


Broadway audiences know Alan for his featured performances in Charlie and the Chocolate Factory, Sister Act, and School of Rock, but this is a breakout moment for him. He plays Annie's bounty hunting partner and his performance of “Feelings” is instantly iconic and part of the greatest of off-Broadway canon.


Brad Oscar is a two-time Tony nominee for his hilarious, show-stopping performances in The Producers and Something Rotten!. Here he plays a South American drug lord turned Broadway producer (naturally), and he serves everything you want and expect from a Brad Oscar musical number.


Christina Sajous first cemented her place in our hearts with her high-flying, showstopping turn in American Idiot. She’s gone on to sing her face off in SpongeBob SquarePants, Spider-Man Turn Off The Dark, Baby It’s You, and Forever Dusty. In Bounty Hunter, she SLAYS it with “The Song of Janessa”.


Actress and recording artist, Badia Farha (AKA Lady Rose) will give you your life in Broadway Bounty Hunter. She’s released albums and appeared onstage in Little Shop of Horrors, School of Rock, and Rent. Just listen to this voice on the show’s big opening number, “Woman of a Certain Age”!


Ms. Jasmine might be the most shocking of all because she is still in college! This talented young lady is singing the house down over at the Greenwich House Theatre—so many jaw-dropping moments from this Penn State junior making her off-Broadway debut. (Also, adapt Moana and cast her!)


Omar is also making his off-Broadway debut in Broadway Bounty Hunter, and he should be so proud of his performance. He plays a bunch of characters throughout the show, and each is so memorable and funny.


Know Jared Joseph because we are surely going to see him again. Not only is his voice so distinct and perfect for the genre, he’s a hilarious character actor as well. No wonder his resume includes roles in The Book of Mormon, Ain’t Too Proud, The Scottsboro Boys, and Ragtime. For his “Sarah Brown Eyes” from Ragtime start the video below at 4:35.


Emily is a total badass in this show. She plays Shiro Jin, the head bounty hunter, and she is lady boss goals AF. She previously appeared in School of Rock and TV’s Sunny Side Up.


Emilie and Ian are the show’s swings, and so we wanted to give a taste of their talents as well


Finally, we cap this love letter with a postscript from Anne L. Nathan. The memorable scene-stealer from Broadway’s Once, It Shoulda Been You, Ragtime, Assassins, Sunday in the Park and, of course, Thoroughly Modern Millie leads the show as the titular bounty hunter on Saturday matinees. So basically, you have to see it twice to see Annie and Anne.


Hurry downtown to the Greenwich House Theatre before August 18 to experience Broadway Bounty Hunter for yourself.