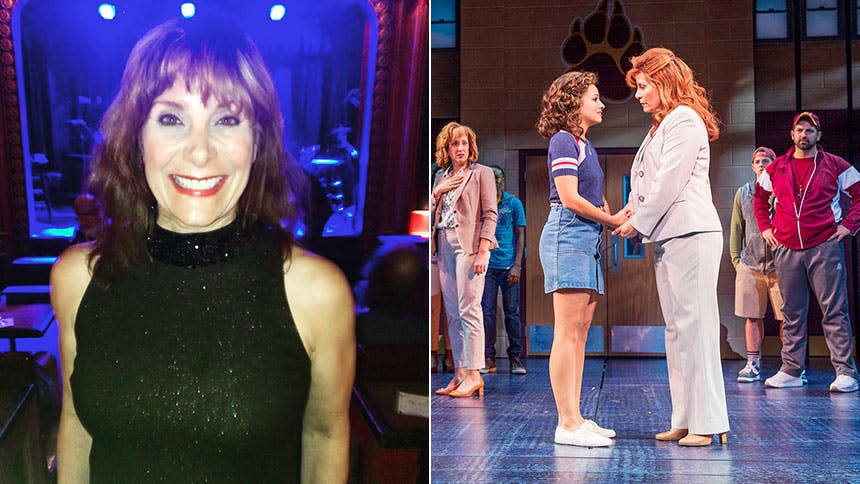 Courtenay Collins makes her Broadway debut as Mrs. Greene, the prejudice PTA president who must come to terms with her own daughter's sexuality, in the Drama Desk Award-winning Best Musical The Prom

. A fixture in the Atlanta theatre scene, the actress, singer, vocal coach, and jewelry designer joined the musical during its run at the Alliance Theatre and stayed with the show through its final performance on Broadway, coming up on August 11, 2019. BroadwayBox gets to know Courtenay a bit better as she discusses theatre in Atlanta & New York, the perfect payoff of making her Broadway debut in The Prom, and why she loves the stage door.

1. How did this role in The Prom happen for you?
The Prom debuted at The Alliance Theatre in Atlanta in 2016. They were looking to cast the role of Mrs. Greene in Atlanta to cut down on out-of-town residence budget. I auditioned and got the job and during the run, Casey Nicholaw asked me if I would come to NYC to play Mrs. Greene!

2. What did it mean for you to make your Broadway debut at this point in your career?
Oh, wow—it means so much more to me at this stage of my life. After leaving NYC to have a family and raise my kids, being a single mom for many years, and working very hard to maintain my work as an actress in Atlanta, coming back to NYC to make my Broadway debut in The Prom is the perfect payback for all of that hard work!

3. Your character is a lightning rod in The Prom who really goes on a journey. What do you love most about the seemingly hard to love Mrs. Greene?
I love this role. It can be taxing to be the person that everyone seems to hate, but I am electrified by the choices I get to make every night. I really feel how the audience is responding to me each performance—and it's always different. Yes, I've been booed and screamed at during the show(!), but, at the end, when her walls are down, the pay off is delicious. I get to use all of my acting muscles and it's extremely gratifying to work with these amazing actors I get to play with.

4. What’s the most memorable thing someone has said to you at the stage door after a performance?
I love stage door. The most meaningful interactions have been young people, who are tremendously moved by the show due to their own similar personal circumstances, bringing their mom or their dad back to the show to meet me. Because they say that Mrs. Greene reminds them of their parent and they want their parent to see that, through this story, there is hope and love and acceptance in the future of their family relationships. These stories fill my heart to bursting and I'm honored to be a small part of their healing by playing my character. Theatre shows us our best and worst selves. The learning and the change starts there.

5. When you look back on this experience, what’s been the biggest pinch-me moment for you?
Opening dress rehearsal when Casey called all the debuts in front to the curtain before the show. 12 young'uns and moi in my big green suit and purse! The audience, 1043 members of the Broadway community, gave us a standing ovation. I'm weeping just remembering that moment. As well as opening night curtain call and being on The Tony Awards. It was so affirming after thinking my whole life that I had missed the opportunity to work on the Great Broad Way!

6. How is Broadway different than what you imagined? How is it exactly how you imagined?
The difference is in the amount of people who are impacted by each performance and the whirlwind that social media spins around Broadway shows and actors. The amount of folks at the stage door, the ear-splitting sound of the curtain call applause. I think I will miss that! Show people are gloriously the same raucous bunch of crazies everywhere. I thrive among these creative souls and theatre crazies. I love and play with every person in our theatre. They always become my family of the moment.

7. Which Atlanta credit are you proudest of and why?
Hmmmmm. That's kind of like asking which family member do you love the most. I plead the 5th. Actually, I'm proud of them all. In every show, I work diligently and respectfully to tell the writer's story with the other actors. I live in the moment, so whatever I am working on is my favorite role, show, performance. Coming up this December, my favorite role will be playing ME in my cabaret at the Alliance Theatre! I'm bringing back Courtenay's cabaret Home for the Holidays for the whole month of December. I love the cabaret format—I tell stories, sing; we have a sing a along; we celebrate everything—it's an evening for friends and family to celebrate the holidays with each other. Plus, there's a bar on stage...and a band!

8. What do you love about life and the theatre scene in Atlanta that you planted roots there?
I love that you can be an actor and a normal person in Atlanta. Most of my actor friends have families, kids, houses, cars, etc...I don't know how I would have afforded to have that in NYC. I was very involved in my kids' schools, sports, lives etc.( I'm sure actors do that here.) I also have the support and love of my family in Atlanta—which is extremely important for me.

9. What was it like to tour the world as Christine in Phantom of the Opera? What sticks out most from that experience?
I loved having the opportunity to see the world and make a living doing my dream role at that time! It was a dream cast of friends and we had the best time together. Touring is hard work, but if you are with cool people, it can be an incredible way to make a living!

10. You also have an Etsy shop where you sell vintage jewelry you design. How did you get into that?
My jewelry company, Vintage Spirit Designs, has been my creative outlet when I'm not acting in theatre. I have always been crafty and have always made things with my hands. I took some jewelry courses and learned the basic things. Then I developed my own style. I can stay in my studio and make things for hours without coming up for air. It is a pure form of creativity for me. I get lost in it. And I love to gift my jewelry, as well as sell it and see other people enjoy wearing it!

Hurry to Broadway's Longacre Theatre before August 11 to see Courtenay Collins as Mrs. Greene in 'The Prom'.