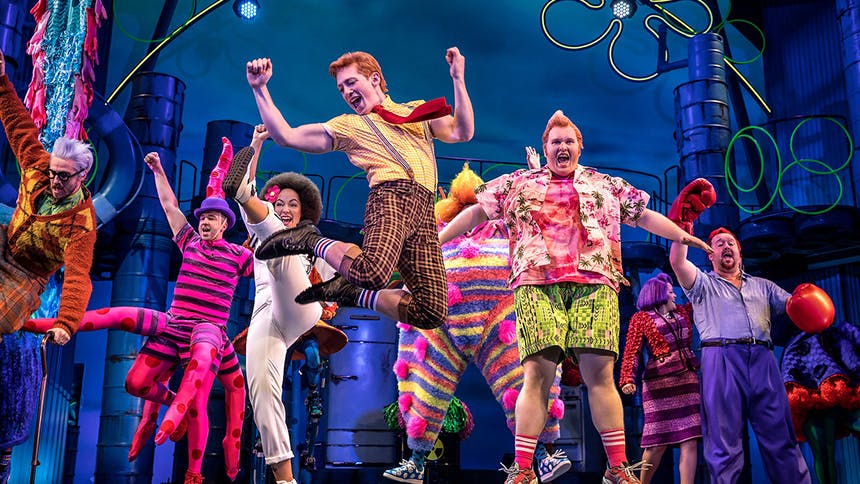 One thing is clear: audiences are LOVING the Broadway musical adaptation of SpongeBob SquarePants

. Conceived and directed by Tina Landau, SpongeBob brings all the joy of the beloved Nickelodeon cartoon to the stage with an original story, incredible sets and costumes, and a cast that knocks it out of the park.


Tina and the cast insist you can love the show without having seen a single episode of the series. But what if you haven’t seen a single SpongeBob episode? BroadwayBox asked the SpongeBob team, what episode should someone watch if they’ve never the TV show and want to just have a grasp on the concept and characters before seeing the musical? Many of the company picked the same episode, “Idiot Box”, here’s why:


“Idiot Box” is an episode in which Spongebob and Patrick order a TV so they could play in the box the TV comes in and they create these amazing worlds inside the box just using their imagination—which is sort of the aesthetic of the show.


I think you should start with “Idiot Box” because that is the episode that was the major source of inspiration for Tina at the very beginning of this, like 10 years ago. Also, the song in our show “BFF” by Plain White T’s very much reminds me of that episode because they are taking that thing and making it into all these different opportunities.


With no hesitation, the episode you need to watch is “Idiot Box” because it was episode that inspired me and the entire aesthetic and design of the show. Because out of nothing, they could make something if they let their imaginations rule the day. We have a lot of cardboard boxes in our show and we tried to create objects that were built out of found objects and scrappy material, so that like them, we have created a world that is built out of detritus —the things in life people think aren’t important or expensive but actually hold the magic.


The first show you should watch is definitely “Idiot Box”. That gives you exactly what you need to know about the world of SpongeBob and what you’re in for—zaniness ensues and imagination pours out.


Well I never watched SpongeBob really before I auditioned a year and a half ago, so I binged a few episodes before my audition—to get an idea of the character. But I bet most of the cast will say the episode to start with is “Idiot Box”. There’s an episode SpongeBob and Patrick find a box and it doesn’t matter what’s in the box, it’s about what they do with the box.

Let me just say you don’t need to have watched a second of SpongeBob to enjoy this show and that’s really important to us—that we made it work for everybody. But if you’re doing one anyway, I would say “Idiot Box” because it’s kind of what this show is all about, which is your imagination can create crazy worlds.


I would absolutely suggest the first episode, the pilot. It introduces all of the characters in such a great way. It sets up the story and the land of Bikini Bottom, so I’m going with season 1, episode 1.


Well, specifically for Mr. Krabs, I would say you really have to watch “Friend or Foe”. It really sets up the dynamic between Plankton and Krabs and you get their backstory. Krabs comes from poverty and his only friend was Plankton until later when they began to work together to create the best burger in Bikini Bottom and that’s when things went awry.


Here’s what I would say: you should watch the first animated film and watch the Goofy Goober Ice Cream scene. SpongeBob and Patrick are at the bar and they keep ordering more and more—food is flying everywhere—then the waiter is looking from behind the bar with the most angry, frustrated look. They just keep going, “oh, Waiter!” My son and I watched this and I had a laughing attack.


Dive into the world of SpongeBob SquarePants the Musical at Broadway's Palace Theatre.