20 Holiday Shows to See This December in New York City 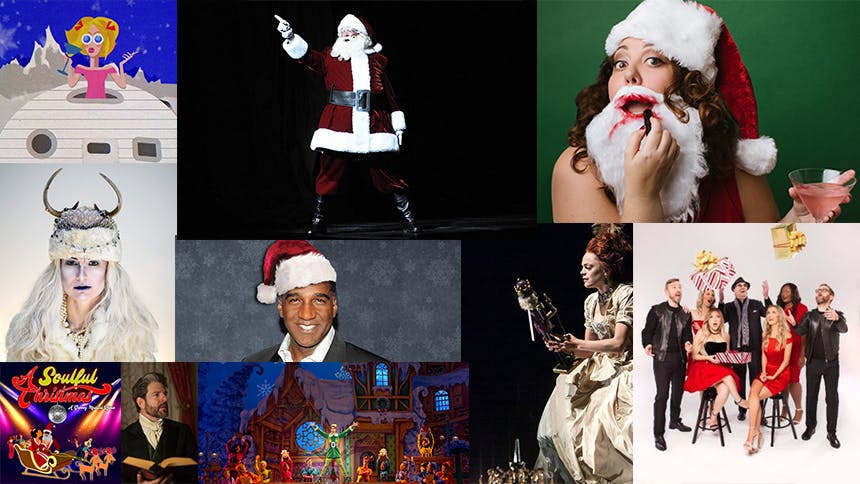 It’s Black Friday and your mind is already on the holiday season. If you’re looking for Christmas-themed shows for the family to see this year, this is the guide for you.


The holiday extravaganza at Radio City is a NYC landmark. The legendary Rockettes keep the entire family smiling from ear to ear. Nothing quite says Christmas like the living nativity that closes out the show.

Home for the Holidays


Buddy the Elf and friends are back in NYC this holiday season at Madison Square Garden with the popular musical adaptation of the modern Christmas classic. It’s a great show for sons, nephews, and dad.


This new Christmas comedy imagines adorable little Cindy Lou Who (of The Grinch fame) all grown up and a complete disaster. Olivier winner Lesli Margherita stars as trailer park Cindy. Pound some eggnog and see the funniest Christmas show in town.


If you want to turn up the heat this holiday season, check out this super sexy version of The Nutcracker that combines theater, dance, circus, and burlesque.


Looking for a bit of funk with your tinsel? Check out A Soulful Christmas

. The perfect gift for the lovers of classic Gospel, R&B and Soul, the Disco-era musical is set during a taping of a special holiday-themed episode of the fictional music-dance television program Groovy Wonderland (inspired by the real hit show Soul Train). What’s a more fun way to ring in Christmas?


Now if you want laughs, spend Christmas with the crazy locals in the third smallest town in Texas. Three actors play all 25 of the colorful citizens of Tuna as they do their best to make this Christmas one to remember in the small-town.


This is a contemporary adaptation of the classic Hans Christian Andersen story for 21st century families in which the title character serves as a metaphor for the cool allure and loneliness of modern technology.

A Christmas Carol at The Merchant’s House

Surrounded by 19th century holiday decorations, flickering candles, and richly appointed period furnishings, audiences are transported back 150 years in this captivating one-hour, environmental production created from Dickens’ own script. John Kevin Jones stars a Dickens and reads the story as the author did in NYC 150 years ago.

Oy Vey in a Manger


Four drag queens read Christmas (and everyone else) to filth in this  ridiculous, raunchy, and R-rated romp through the holiday season. Running December 7-24 at SoHo Playhouse

Tori Scott in Vodka Is the Reason for the Season


Downtown’s mistress of mayhem, Tori Scott returns to Joe’s Pub for her annual holiday show. If you think there’s a chance you’re on the naughty list this year, then this is the show for you!


Feinstein takes the stage at his namesake for his annual Christmas show December 18-30. It’s a favorite for those in the know in New York City.


The Tony-nominated favorite brings that smooth voice to Feinstein's/54 Below December 18-23 in an all-new Christmas concert that is sure to make you swoon.

Matt Doyle and the Whiskey 5


A Clockwork Orange star Matt Doyle returns to 54 Below on December 5 with his band, The Whiskey 5, to celebrate his holiday album, Make The Season Bright. Fans are encouraged to wear their ugliest Christmas sweater and sit back as Matt Doyle brings that gorgeous voice to your favorite holiday songs.

The Skivvies: Sleigh My Name


Why bundle up when you can see your favorite performers stripped down with The Skivvies at Joe's Pub on December 10 & 11?! Enjoy the sights and sounds of the holidays in this concert thats equal parts sexy and hilarious.

A Swingin’ Christmas with Eric Petersen


The School of Rock and Escape To Margaritaville star delivers Christmas classics sung in the style of Frank Sinatra, Harry Connick Jr, Nat King Cole, and Michael Buble at 54 Below on December 10 with special guest star Betsy Wolfe.


The hunky quartet returns to Feinstein’s/54 Below on December 13 to offer their unique pop-classical spin on many of the most beautiful and traditional holiday favorites.


The Cagney and Frozen star debuts his joyful holiday concert at Feinstein’s/54 Below on December 14.


The sweaters are hideous but the voices are gorgeous in this annual holiday concert. This year, the Broadway bash takes place at the Green Room 42 on December 5 and a portion of the proceeds benefits the Covenant House of New York City.

Feinstein's/54 Below
Best Priced Tickets
Newer
Rewatch All The Thanksgiving Day Performances From Broadway in One Place
Older
Exclusive Photos! Go Backstage at Broadway's Anastasia as the Cast Prepares for the Hit Musical
Sign up for BroadwayBox Discount Alerts