Introduce Yourself(ie): 10 Questions with The Mad Ones Star Krystina Alabado 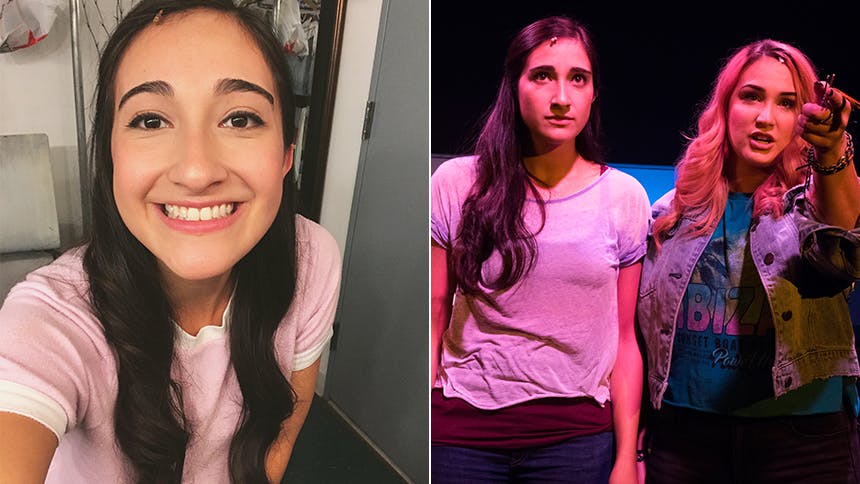 Krystina Alabado stars as Samantha Brown in the off-Broadway premiere of Kerrigan and Lowdermilk's The Mad Ones (formerly known as The Unauthorized Autobiography of Samantha Brown), and she's singing her face off and acting the house down.


The breakout performance marks her first big leading role in NYC, though Krystina has appeared in Lazarus off-Broadway, Broadway's American Psycho & American Idiot and the tours of Spring Awakening and Evita. Below, BroadwayBox gets to know this fierce young talent better as we talk about working with David Bowie, attending Spring Awakening school, and the opportunities West Side Story and Rent showed her.

1. What are three words to describe Krystina in her senior year of high school:
​M​otivated, ​E​xcitable, C​onfident?​ Band geek.

2. Who were the voices you grew up singing along to:
Selena, Christina Aguilera, and Sutton Foster.

3. What American Psycho memory could always make you smile:
​I mean so many things come to mind but two specifically. Firstly, me and Jenn Damiano met doing the lab of this show and she is now one of my closest friends/a bridesmaid in my wedding that happened two months ago! We had the best time being goofy and loving each other in this show. Secondly, my now husband (then boyfriend) Robert Lenzi was opening Tuck Everlasting the same time as us and our theatres shared an alley way (The Schoenfeld and the Broadhurst). So we could go to the secret doors backstage and say hi in costume and mics throughout tech and our (short :( ) runs! It was SO cool and dreamy. Also weird to have me in my crazy American Psycho costumes kissing Bob is his like colonial garb as Miles Tuck ha.

4. Do you and hubby Robert Lenzi have a dream revival to do together:
We just discussed this question over a glass of wine and we are still not coming up with a good answer. Honestly me and Bob kind of run in opposite show circles in our careers thus far. I have ended up in the like Rock/Pop arena and Bob has ended up in the Broadway more legit-ish shows (his gorg Baritone voice truly melts my soul). So my answer is, tbd?

5. What was your first introduction to Samantha Brown as a musical:
My first intro to this musical was actually on the Spring ​Awakening ​ tour. We were doing a cabaret somewhere in the USA and Taylor Trensch sang "Run Away With Me" and I remember thinking, "Cool, T Trensch is the greatest performer alive and also, that song is dope!"

6. What was the best and most challenging part of touring the country at 18 with Spring Awakening:
​The best part about Spring Awakening was like everything? I mean, this show and time in my life is so hard to even explain in words. I was doing my dream show (kind of still my dream show, I will forever think it is the greatest musical to ever live) and I was living my dream as a professional, working actor, but as an 18 year old, far before I thought I would! I didn't go to college, but sometimes I joke that I went to Spring Awakening school. I learned SO much on this tour about the business, performing a show 8 times a week (for two years!), covering, swinging, acting—I mean you name it, I learned it on that tour. I met some amazing people and got to see so many cities in the country. I had never really left Arizona, so touring the country and Canada was such a gift to little old me. I will never stop being grateful for that opportunity.

7. In a reading of the musical you played Kelly, how did the leap to Sam happen:
​Y​ea, sometimes I think back on that and think, "God so weird that I'm Sam now when I worked on Kelly ​before." At the beginning I kept having to actively tell myself, "No! You are not Kelly anymore! Get her harmonies out of your head!!!" But I actually feel super lucky to have worked on both because I feel like I kind of know Kelly better? Because I was her for a little bit? And as actors we are always trying to figure out how to get to know the other characters as intimately and quickly as possible, and me as Sam Brown, Kelly is my best friend, so having lived with her for a little bit, I feel like i actually know her you know?

8. What was the biggest pinch-me moment of Lazarus:
​I mean, this entire thing was cray cray you guys. I was attached to this project from day one with the reading and I think the pinch me moment for me was the work I got to personally do with David Bowie before we even started the off-Broadway production. He was always so kind to me and supportive and I'll never forget my time with him.

9. What was the film, TV show, or theatre piece that made you first want to perform:
Well, I grew up singing. My dad is a musician and I would sing with his band and I was always putting on plays and singing with my two younger siblings. But I think as I got older, my actual like life aspiration realizations started with watching the West Side Story movie. I would watch it over and over, and at a certain point, it made me realize that not only was there a field where I could act and sing and dance at the same time, but that there were roles and songs and stories for POC. That's when I really started getting inspired. Like, when I saw Daphne Rubin-Vega (now a good friend of mine actually) play Mimi for instance, I saw myself on stage for the first time and felt like someone like me could actually maybe do it!!

10. What’s your most memorable audition story:
Auditions to me are fascinating. I have come to love them but I used to get so nervous! Honestly, my most memorable audition story is auditioning for Spring Awakening. I flew to Boston from Phoenix on a whim because there was something about the show that I felt perfectly fit me and I waited in line, outside in the dead of February in Boston at 5am to get a number. I sang my 16 bar cut and got called back on the spot! Mind you, this was my first EVER professional audition so I was flipping out! I'll never forget how that felt especially that from there on, the next year was a total whirlwind :)

Don't miss Krystina Alabado's performance as Samantha Brown in 'The Mad Ones' at off-Broadway's 59E59 through December 17.