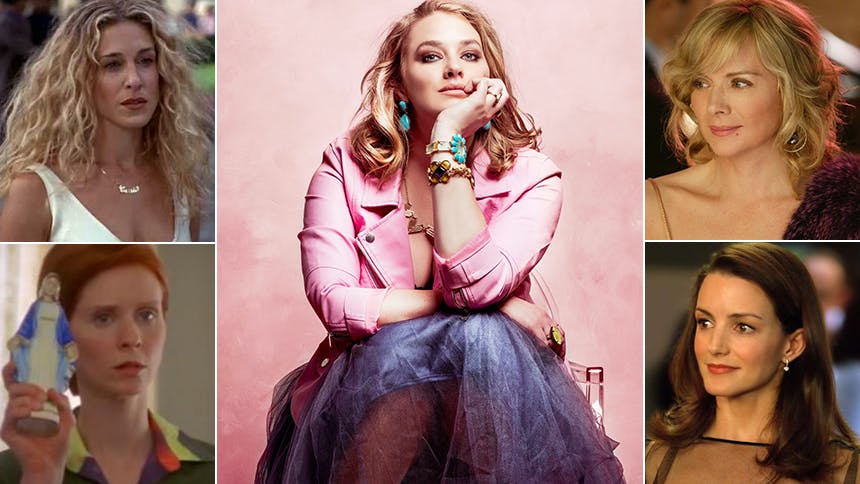 The cosmos, the shoes, the sex, and the deep questions Carrie asks herself while musing at her laptop are all back in NYC thanks to Kerry Ipema and her new love letter/parody One Woman Sex and the City: A Parody of Love, Friendship and Shoes

. #WhoNeedsSATC3 Following a critically-acclaimed engagement at the Edinburgh Fringe Festival, the show relies on Kerry’s incredible comic timing and killer impersonations to revisit some of the most iconic moments from all six seasons.

Sex and the City is 20 years old this year. Do you remember where you were 20 years ago? Are there moments you were proud of? Moments you’d rather forget? Sex and the City is no different. In One Woman Sex and the City (currently playing off-Broadway at the Jerry Orbach Theater) we do just that, lovingly look back at the series that stole our hearts and made us all envy a life in New York City filled with Manolos, men and martinis and revisit the iconic foursome in all their glory.

This list is the best and worst episode for each of the ladies. It’s in no way definitive, but it’s solely my opinion as the co-creator and actor of One Woman Sex and the City. If you disagree with any of these, I am happy to discuss it over some cosmos after the show.

Carrie leaves her shoes at the door of a friend’s baby shower and they’re stolen. I mean, if I hosted a party and someone’s shoes were stolen, I would launch a full investigation—Olivia Benson style, but my favorite part is Carrie’s response. Anyone who’s single and has attended countless bridal/baby/shower/bachelorettes will understand the sweet joy when Carrie registers for the exact pair of shoes that were stolen and announces her marriage…to herself. I’d like to take this moment to invite you to my single shower…at the Jerry Orbach Theater!

When Carrie and Aiden finally call it quits she’s left in a New York real estate pickle: she needs to buy her apartment back from Aiden. And she’s broke. So she does what any self respecting person would do, she asks her ex-boyfriend for a loan… which he GIVES her…and then she TEARS IT UP! Samantha and Miranda offer her the money, and she quickly turns them down, but when Charlotte stays audibly silent (i.e. slurping on her cocktail) Carrie runs to Charlotte’s home and bullies her until she folds and offers Carrie her engagement ring. Carrie can now afford her apartment, because mysteriously the cost of the ring is the same as the down payment to her apartment, but what’s worse, we never see Carrie pay Charlotte back for the generous loan—I guess it was a gift, not a loan. Hopefully she sent a thank you card.

In this episode Samantha is hoping to reel in a big new client, hotel tycoon Richard “her future beau” Wright. She has her eyes set on managing PR for his hotels. She knows she wants it, so she goes after it. This is Samantha Jones in all her glory—she fights for herself per-usual. He declares he “doesn’t hire women; they are too emotional” (how does she date him? That’s a dealbreaker for me), so Samantha tells him off and gets the job. Go Samantha!

This is the infamous episode where Samantha dates a 72 year old multi-millionaire. They inevitably break up, because she sees his old rear end in the moonlight, but this feels a little too gold-digger-y, especially for Samantha. I mean, she is a high powered PR lady! She doesn’t need to be digging for gold. Let’s also not shy away from the fact that Donald Trump also appears in this episode. I guess it’s a topic he’s familiar with.

This is when Harry finally proposes to Charlotte—after she tries to change him, after she converts, and after they separate. I think Charlotte has the most significant growth of all the women in the series. Harry is not who she expects to end up with; in fact, when they start seeing each other, she is embarrassed to even tell her friends. It’s the evolution of Charlotte herself (and, in turn, their relationship) that makes this episode so special. Harry is the right partner for Charlotte and this proposal is perfect.

This is the episode where Charlotte negotiates her prenup to Trey. This isn’t a good look on anyone in the York or MacDougal camp. The prenup Bunny, the mother-in-law from hell, wants Charlotte to sign says she must be married for 30 years to get $500,000 and only if she has a boy will that number increase by $100,000 (no mention of having a girl). Listen, I know this exists in social circles, but ICK! Charlotte goes from being offended about signing a prenup to fighting that she is worth a million. So, I’m not sure where she stands on this— is the prenup itself offensive or just her worth? Either way, it isn’t the best Charlotte York moment.

This is the episode we meet Magda, Miranda’s housekeeper. She becomes a SATC mainstay, but in this episode, Magda takes it upon herself to try and nudge Miranda into a direction that is—let’s say—old school. It starts innocently enough with Magda moving Miranda’s mugs in her kitchen and switching out the coffee for the tea (which is egregious seeing as Miranda is a lawyer at a high-powered law firm and Mama needs her coffee!) But it’s the final battle that makes this episode for Miranda one of the best! Miranda uses her nightstand like any single, busy, independent women would—it’s filled with condoms, hand cream, and a battery powered “assistant.” Well, Magda replaces the “assistant” with a statue of the Virgin Mary. Miranda has had it! She tells Magda off and defends her life as a single woman and Magda returns the “assistant” to its rightful place. This episode is like “old school” in one corner and “independent lady” in another. I like that “independent lady” wins this round!

This is the episode where Charlotte signs the women up for a tantric sex class. Poor Miranda gets a face-full in this episode. I mean, it’s hilarious, but poor Miranda.


This is by far my favorite episode of the series. I particularly love this episode because, as the show does time and time again, it tackles big real-life moments! In this episode Miranda finds out she is pregnant from a one-night stand with Steve and Charlotte finds out she has a 15% of getting pregnant. Two friends on different sides of the spectrum.

Miranda discusses the possibility of an abortion, Charlotte is upset because she is dealing with infertility, and Carrie and Samantha discuss their personal histories. What makes this episode the best, in my opinion, is that in the end they all come together and love and support one another. In my eyes, this is the point of the entire show—friendship rooted in unconditional love, through thick and thin.

Don’t miss Kerry Ipema in “One Woman Sex and the City” at off-Broadway’s Jerry Orbach Theatre.

Newer
For A Star Is Born, 15 Broadway Stars Belting “The Man That Got Away”
Older
Five Burning Questions with New Waitress Star Al Roker