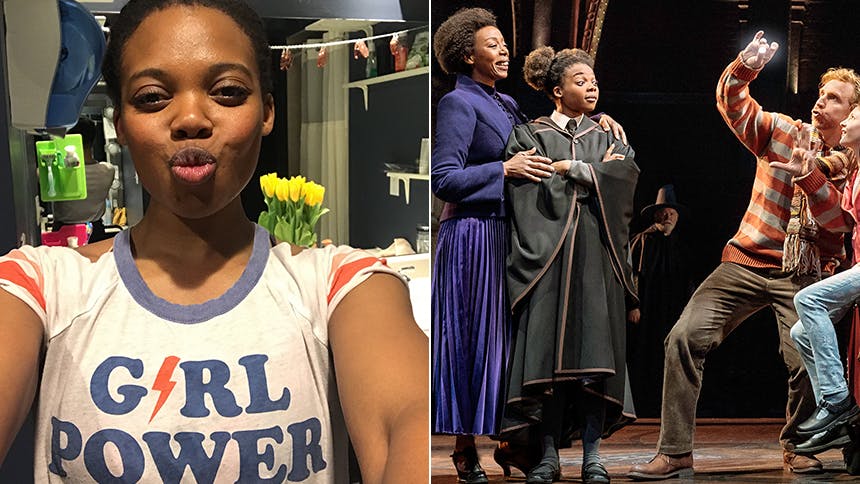 Susan Heyward co-stars as Rose Granger-Weasley (the smart, determined teenage daughter of wizard world legends Hermione Granger and Ron Weasley) in the critically-acclaimed, blockbuster Broadway play Harry Potter and the Cursed Child, a two-part epic set 19 years after J. K. Rowling's iconic book series concludes. Susan (whose previous NYC stage credits include her Broadway debut in The Trip to Bountiful and MTC's Ruined off-Broadway) memorably appeared on TV as Detective Pilgrim on the superhero series Powers; Cece in HBO's Vinyl, and CO Tamika Ward on Netflix's most recent season of Orange Is the New Black. BroadwayBox gets to know Susan a bit better as she talks about her pre-show process for Cursed Child, the actresses who inspire her, and her favorite Harry Potter book, spell, Hogwarts house & more.


1. If Rose were your friend IRL, what would you absolutely love about her?
Her ambition to be great and her honesty.

2. What would drive you crazy about her?
Probably her ambition to be perceived as great and her honesty, LOL. She doesn't pretend her parents and her connection to Harry doesn't give her a lot of social currency in the wizarding world. She hasn't yet learned how to be graceful or humble about her privilege. That kind of unawareness can be deeply grating.

3. What is your pre-show like at Cursed Child?
It's all set up like a domino chain. The cast arrives at the theater an hour and a half before the show for a company warm up, but I try to get there even earlier for some quiet time to get my mind right because once the day starts, there's not a lot of downtime. I'm a huge introvert, so quiet time and silence help me charge my people battery before immersing myself in this world bursting with personalities on and backstage. After the group warm up, I do a little more solo warm up in the studio as everyone disperses to get into wigs, costumes and make up. Then I hit the shower (ideally the warm up worked up a good sweat!), then my dressing roommates indulge me in my choice of the music for the day (thank you, Lauren and Jessie!). We've had The Little Mermaid, The Black Panther Soundtrack, Christine and the Queens, some Newsies, The Captain Planet theme song was a good one; whatever strikes my fancy! THEN I get into costume, put on my wig, grab by Belt Box and do some vocal exercises, check my mike and it's a go!

4. What’s been your favorite stage door interaction after the show?
OOF. Everyone is so lovely and warm and excited at the stage door. There was one woman I'll never forget who was so overcome at the experience that she was shaking and crying and couldn't speak. She let me hug her for a bit. I felt very lucky to be a part of something that literally moves people so much. To be able to witness and share that catharsis and human connection is what drama is all about. Witness. Catharsis. Connection.

5. Have you ever taken a sorting hat quiz? Which house did you land in?
Ravenclaw, baby!!!

6. Which HP book is your ultimate?
Order of the Phoenix. There is something sacred and eternal about a generation seeing the work to be done that the previous generation can't or won't do. The sense of revolution is palpable in that book. It was empowering to read as a younger person and I'm able to recognize it happening in the real world today.

7. Which HP spell would you most like to master for your real life?
If I could nullify the effects of overuse, I'd probably put some Felix Felicis in my tea every morning. That kind of optimism and faith that everything is going to work out well takes a lot of effort to cultivate. For me, at least. I believe in a higher power whose intentions are good; I could use more help trusting it, though. Sip, sip!

8. What was your favorite set memory from Orange Is the New Black?
Double OOF. Um...#keepingthesecrets for someone who might want to watch it in the future, there's an episode where we get to see a beautiful montage of what young, non-wealthy, female friendship can look like. I found it freeing and nourishing to film it. The response from folks lets me know I wasn't crazy and they felt too.

9. Which would you rather be a wizard like in Harry Potter or a superhero like in Powers?
What??? How could I choose!? You know, I think the power in both worlds come from the same source. It's about recognizing the thing in you that is unique and offering it to the world in a way that is purposeful and beneficial to the group. When we do that, that's where our power is. (I'd also be up for anything that could help me apparate and skip the MTA.)

10. If you could sit down and interview any fellow actress, who would you choose and why?
I'm greedy, so I would want a round table with Sandra Bernhardt, Eleonora Duse, Josephine Baker, Eartha Kitt, Whoopie Goldberg, Viola Davis, and Charlize Theron. They are (or were) incredibly athletic, complete chameleons who run their careers as business and cultural enterprises. They live in the tension between art and commerce in a way that leaves me in awe.