Hunter Parrish Takes On Seven Questions About Good Grief, This Is Us and His Dream Stage Collaboration 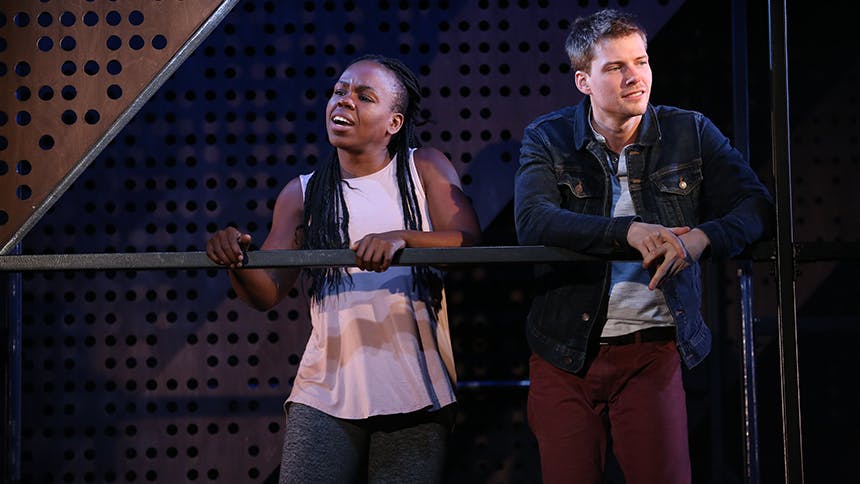 at the Vineyard Theatre. Hunter made his Broadway debut as Melchior in Spring Awakening and then starred as Jesus in the B’way revival of Godspell and Claude in the Hollywood Bowl production of Hair. On TV, he’s had memorable roles on Weeds, Quantico, The Following, Good Girls Revolt, and, most recently, This Is Us.


BroadwayBox caught up with Hunter to hear about joining Good Grief, the universal experience of grief, his dream musical collaboration, and the cool stuff he's kept from past jobs.

1. You’re making your off-Broadway debut with Good Grief. What first struck you about the piece when you read it that you wanted to be a part of this?
I love that this play is so beautifully vulnerable and human. I love nostalgia, and it’s in there. I love humor that leads to tears, and it’s in there. I love getting a peak behind a culture other than my own, that is certainly there. And yet, the experience of grief is universal.


2. What keeps you coming back to the stage?
I wish I had come back much sooner. Here we get to be submerged in the story-world a little longer. In TV/film, we cut after 2 minutes, whereas in theater you get to stay there, mostly uninterrupted for 2 hours. I love that. I love living in that storytelling space for as long as possible. But more so, what keeps me craving the stage are the incredible playwrights and directors offering such inspiring and relevant stories untold in other mediums.


3. You’ve starred in the musicals Spring Awakening, Godspell, and Hair. Which of those challenged you most?
By far Hair. All the shows have required a lot but Hair was madness. We threw together a massive production in 9 days. And no allowances were made in spite of the limited time. No special effect or theatrical moment was spared. Adam and his team of choreographers spent endless hours finessing dance and movement for our large cast! I’ve never crammed so hard in my life and I’ve never had more fun. And the Hollywood Bowl does that every year, it’s incredible and insane.

4. Is there a dream musical or play out there you’re dying to tackle? What’s on the bucket list?
What I really want to do is a new musical. Maybe if I’m lucky, a new piece from Pasek and Paul or Tom Kitt or Andrew Lloyd Webber. Or a collaboration of all three. Now that would be quite the musical!


5. You’ve been a part of so many popular TV shows, which do people stop and talk with you about most often?
Sometimes my favorite characters to watch are the ones that come in at the eleventh hour and turn the whole thing on its head. I feel fortunate to have been able to do that a couple times on some great shows. I guess people probably speak to me most about Weeds. But it’s always fun when someone mentions a lesser known project from over 10 years ago.

6. You’re now on everyone’s favorite cry show This Is Us. Tell us the latest movie or TV show that made you ugly cry watching it.
I’m a huge fan of the show. Can’t keep from crying every episode, without fail. Luckily, I’m in good company.


7. What’s the coolest or most sentimental thing you’ve kept from a gig?
I try to keep a piece of wardrobe from every job. Half my closet, up until recently was Silas’ clothes from Weeds. We gathered a lot of outfits over 8 years and production was kind enough to give them to all of us when we ended the show. I have an epic hippie necklace from Hair. I have my razor-blade necklace from 17 Again. Probably my most treasured item is Jesus’ handmade baseball jersey, which I got to keep when I left Godspell. That show has huge significance for me so I am grateful to have it to commemorate that time.


Don’t miss Hunter Parrish in Good Grief at the Vineyard Theatre through November 18.