Chris McCarrell Takes on Seven Questions About The Lightning Thief, His 12-Year-Old Self, Photography, & His Pop Culture Obsession 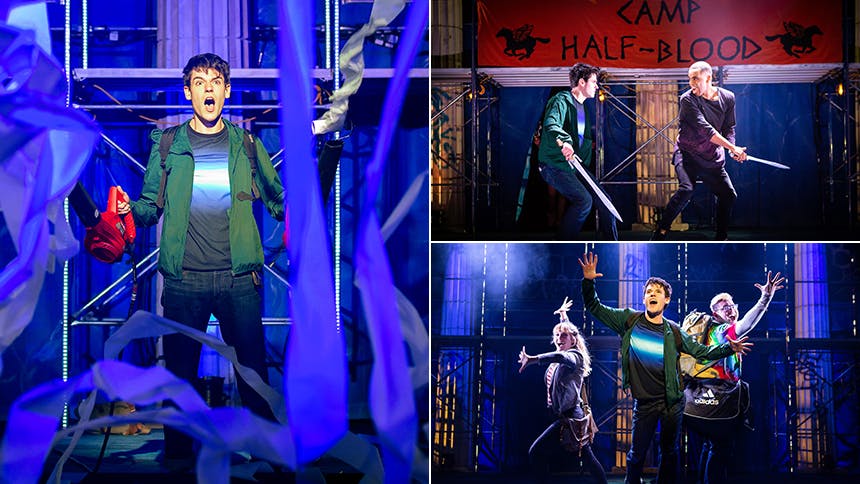 Chris McCarrell made his Broadway debut in the revival in Les Miserables (Marius) before taking on the role of Percy Jackson in the super-popular musical adaptation of The Lightning Thief: The Percy Jackson Musical

, based on the best-selling Rick Riordan YA book series. He played Percy in the show’s premiere New York run and toured the musical around North America. This March, he and Percy Jackson return to NYC to play the famed Beacon Theatre from March 28-31.


BroadwayBox caught up with Chris McCarrell to talk about how his performance as Percy has evolved, his passion for photography, and who he was at 12 years old.

1. How do you feel like your Percy Jackson has changed since NY saw him last?
I have a much better grasp on what the show is about in a broader sense. I always knew Percy's storyline, but now that I've actually watched the show, I have such a better grasp on the bigger themes that the show hits on and the overall style of it. I feel like I have a lot more punch in what the show's truly trying to say to its audience, rather than just this kind of boy trying to figure out his life.


2. What tour city have you had the most fun in?
We liked where we teched, Fayetteville, Arkansas. It was the most sleeper hit of a city with us. It was this small college town, and we just loved all the shops, breakfast places, and our hotel. We had so much fun! We spent New Year's Eve there and went nuts. We all talk about how nothing has topped Fayetteville, Arkansas yet.


3. What’s been the coolest/most special memento you’ve bought yourself on tour?
I got a vintage jean jacket in Detroit that is like my shining armor now. I never take it off. It's like a 1990's Guess jean jacket, and I'm obsessed with it. We're happily married.


4. How is photography a different expression of creativity for you than performing?
In a way, it's tied to theatricality because it's more of the directorial side of things. I'm almost like costuming, hair designing, lighting, and set decorating. It's almost linked to my theatrical brain because I'm setting up scenes that are trying to tell a story. Theater is so collaborative that I'm just one part of a very large, wonderful machine, but photography is just so much smaller. It's just me and another person. It’s fun when I have a photo that I'm proud of because it's truly just all of my brain. One day I hope to get into directing, and I feel like photography will be a huge, huge part of how my shows will look and feel. I have a much keener eye to light design, costume design, set design and props. I love that.


5. How has leaving New York changed you as an artist?
The kind of shows and the kind of roles that I want to be doing, I want them to have a sense of rootedness and groundedness that I don't think that I'll be able to find in the city, just personally. So, I knew that if I moved out of the city that I would bring an energy with me when I auditioned and when I do shows in the city or when I tour, and I hope people and audiences outside of the city would appreciate and notice that there's a difference. I try to live a lifestyle that has a sense of normalcy to it and connected to some silent moments, where my brain can think. My imagination is much richer now because of it. I feel like my fantasy world is much more heightened the more normal my life gets.


6. What’s your pop culture guilty pleasure right now?
Oh my gosh, it's not even guilty. We are obsessed with Lindsay Lohan's Beach Club. It's the most confused television show I've ever watched. We just love that in every episode we're trying to figure out what kind of show it is. Is it her counseling these kids? Is it like Survivor? Like one person goes home every episode? Is it like Real World? We can't figure out, and I don't think that Lindsay has figured out what show she wants to have. That's a pretty guilty pleasure. Vanderpump Rules is a very non-guilty pleasure. And Pen15.


Don’t Miss Chris McCarrell in The Lightning Thief: The Percy Jackson Musical at the Beacon Theatre from March 28-31.