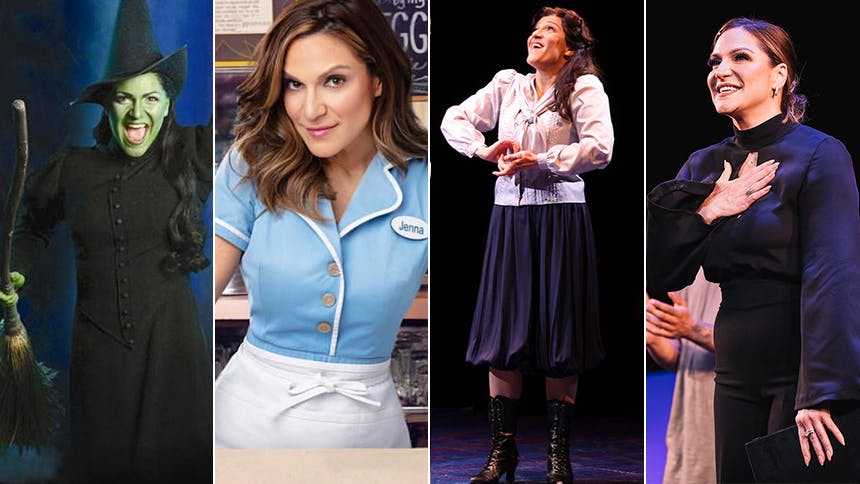 , and fans are holding their breath to hear that incredible voice wail on “What Baking Can Do” and “She Used to Be Mine”. (Also, she has the dreamiest Dr. Pomatter’s—first Joey McIntyre then Jeremy Jordan steps in April 8.)

To celebrate Shoshana’s returns to the Broadway musical, let’s take a little trip down YouTube’s memory lane with that one-of-a-kind voice.

Shoshana graduated from CCM (University of Cincinnati College-Conservatory of Music) in 1999 and immediately landed a gig in the epic off-Broadway revival of Godspell in 2000. Now, no T, no shade, but that is the best Godspell recording you’ll hear in your life, in large part to Sho and her “Bless the Lord”.


Then she toured with the musical Leader of the Pack before joining the OBC of Hairspray as Corny Collins Council Member Shelly. Thanks to her insane range, she also understudied the leading roles of Tracy Turnblad, Velma Von Tussle, and Prudy Pingleton.


In 2004, Shoshana gained a legion of fans as Broadway’s second Elphaba in the mega-blockbuster Wicked. She also played the role on the first national tour of the show in 2006. Now facts are facts America: It’s been 15 years and no one sings “The Wizard and I” like Sho.

In 2005, she stopped the starry Actors Fund concert of Hair with her “I Believe In Love”, and truly the song has never sounded the same since. #WhistleTones


She served everything and then some as CeeCee Bloom (the Bette role, obvi.) in the Chicago production of Beaches. The larger than life performance earned her a Jeff Award for Best Lead Actress in a Musical.

In 2017, she gave fans the moment they’ve been waiting for with her Irene Award-winning star turn as Fanny Brice in Funny Girl at North Shore Music Theatre. E-P-I-C.


In 2018, she reminded New York audiences who the queen was when she co-starred in the Encores! revival of Jason Robert Brown’s cult song cycle Songs For a New World. She made us LOL with her “Just One Step” and then she left us for dead with her “Stars and the Moon”.

Along the journey, there have been legendary international concert moments and viral videos with pals Cynthia Erivo and Todrick Hall.


Don’t dare miss your chance to see and hear Shoshana Bean take the Waitress score to the next level at Broadway’s Brooks Atkinson Theatre through May 12.

Waitress
Discount up to $60
Newer
Get an Exclusive First Listen at Desi Oakley Performing "All or Nothin'" Off Her New Album
Older
Enter the World of Blue Man Group with This Rare Look Behind the Scenes with Mark Frankel, Bhurin Sead & Pete Simpson