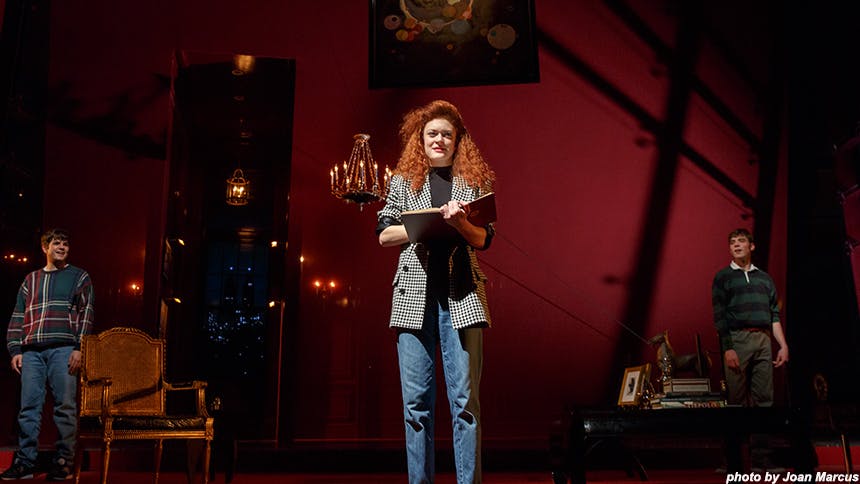 Colby Minifie made her Broadway debut at age 13 in Martin McDonagh's dark drama The Pillowman. She went on to star off-Broadway in Punk Rock, City Of, and Close Up Space. Last season, she returned to Broadway opposite Tony and Emmy winner Jessica Lange as the Irish maid Cathleen in Long Day's Journey Into Night. This year, she co-stars as Allison Janney and John Benjamin Hickey's angry and intelligent daughter Tess in the Tony-nominated Broadway revival of Six Degrees of Separation

. BroadwayBox caught up with Colby to talk about her stage career, working with and learning from her co-stars, and being recognized for her role on Netflix's hit series Jessica Jones.

1. What’s been the most exhilarating moment you’ve had on the New York stage?
Oh boy, I’ve been so lucky. The first preview of Six Degrees of Separation was one of surprise and joy. There’s nothing quite like the purity of a first preview and for this one, the audience met us with unending support and excitement. None of the jokes had been exposed to the finesse that occurs after you’ve been in front of multiple audiences. Each surge of laughter from the audience was a shock. But we all took it as a gentle push of encouragement and we kept skipping forward. We were all full of satisfaction that the play worked! It was a pretty spectacular feeling.

Similarly, there were many times when I would sit in this little nook behind the downstage lights during the fourth act of Long Day’s Journey Into Night and watch these giants tear into O’Neill’s play. I could hear the show being called just to my left, I could see a sliver of the audience, and I could watch the all the action as if I was witnessing it from the next room at the real house in New London. It was very surreal seeing the magic of theater, with everyone at their best, all from one nook.

2. What’s been the most stressful?
When I forgot an essential prop for a scene in Molly Smith Metzler’s Close Up Space at MTC. My character spoke only Russian for her first scene and she presents a series of transparencies on her father’s beloved projector explaining why she has arrived at his office throwing snowballs. The transparencies are essential as they contain the only English explanation my character has for her behavior and they set the rest of the play in motion. Of course, one day, I forgot those very essential artifacts and I reached for them mid-Russian-insult, and my bag was not there. I looked up at David Hyde Pierce (boy was I lucky he was my scene partner), and muttered a breathless, “f***!”. My feet wouldn’t move. I kept telling myself, “Just run offstage muttering some Russian nonsense, get the transparencies, and finish the scene!” But I was helplessly frozen. David, the saint, jumped to the end of the scene, I followed his lead and jumped to my recitation of an Anna Akhmatova poem, and it was all over. I had a ninety second quick change before the next scene, during which I balled my eyes out, and then attempted to finish the play with whatever shred of dignity I had left. Turned out Joan Rivers was in the audience that night.

3. In back to back seasons you’ve worked alongside Emmy winners Jessica Lange and Allison Janney. What’s the biggest thing you’ve learned from working with each of those ladies?
Oh man, I’ve just been so lucky to work with these passionate, strong, leading women. The most inspiring thing for me to see was that both of them are comfortable in continuing to learn. Jessica has challenged herself so much throughout her career, especially in theater the past few years. There were times in rehearsal when she would say, “I don’t know what I’m doing here.” Similarly, Allison is constantly stepping into uncharted territory with her work and saying yes to things that scare her. And she would also turn to us during rehearsal, shrug her shoulders and say, “I don’t know”. For me, a perfectionist, I’m constantly trying to get it right on the first try and I am so hard on myself when I learn something that I feel like I should have known years ago. But these ladies have both taught me that the best work comes from the humility of wanting to learn, of knowing you don’t have all the answers, of asking questions, of being open to changing your process. We will never know it all, and they have taught me that it’s best to just accept that.

4. What’s the most random or ridiculous place you’ve been recognized by a Jessica Jones fan?
By a doorman at the top of the Empire State Building.

5. Six Degrees takes place in 1990 New York, so time for a '90s pop quiz.
Favorite '90s film: A tie between Mrs. Doubtfire and What About Bob.
Ultimate '90s album: Wilson Phillips, 1990
Play or musical you wish you could go back and see in the '90s: Mike Nichols and Elaine May: Together Again on Broadway (one night only, but what a good night it must have been).
'90s TV show you will never stop watching: “My So-Called Life” & “Freaks and Geeks”.

Get yourself over to the Broadway's Barrymore Theatre before July 16 to see Colby Minifie in the acclaimed, Tony-nominated revival of 'Six Degrees of Separation'.