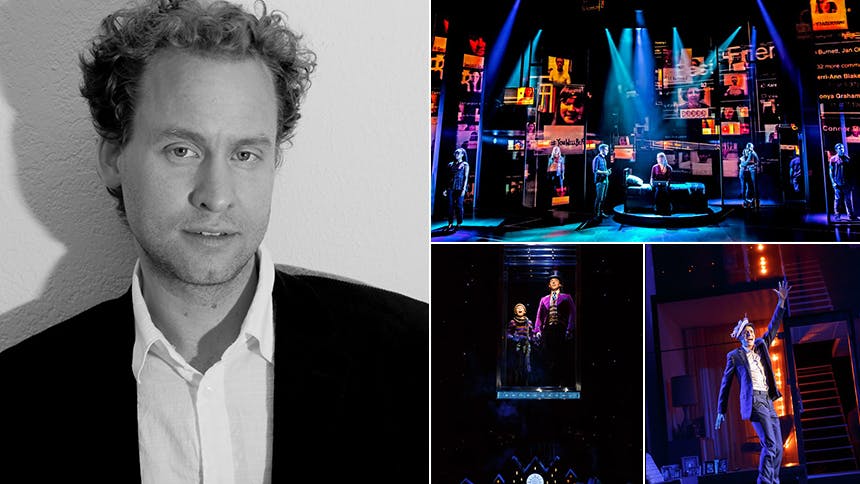 . This season, Japhy also designed the lights for the big musical adaptation of Charlie and the Chocolate Factory, the cult comedy Significant Other, and the new off-Broadway musical Bella. Next year, he returns to Broadway as the lighting designer on RTC's Marvin's Room.


BroadwayBox caught up with Japhy to discuss juggling three shows this season, advise for aspiring designers, and how physics and psychology influence lighting.

1. When did lighting design first appear on your radar?
When I started undergrad at the University of New Mexico in Albuquerque, I had never been exposed to live theatre. I was sampling an array of disciplines such as sociology, political science, English Lit, painting, and photography—and I needed an elective credit so I decided to take a course called 'Intro to Stage Lighting'.

My professor, John Malolepsy, proved to be far beyond anything but a normal teacher. He is not only an amazing set and lighting designer, he is an advanced philosopher of all things related to light. He taught me to dissect every day reality into an experience defined by the light that inhabited each moment. I began designing student shows (theatre and dance), experimenting with lights in the lighting laboratory, and also I spent a lot of time studying about human perception in the physics and psychology departments. In the summer, I did an apprenticeship at The Santa Fe Opera. Five consecutive seasons there proved to be fertile ground for professional learning, allowing me to build relationships with new peers, and to work with world-class designers.
And what do you consider your big break?
In reality, I had a series of big breaks. The very first show I designed in NYC was nominated for a Drama Desk award. It was presented at Soho Rep in 2004 titled Frankenstein by a fantastically inventive downtown theatre company called The Flying Machine. Their shows were deeply image-based, lots of simple, yet stunning lighting effects were used and thus the lighting got a lot of attention on the show. The second big break came in 2005 when I was asked by the great German director Peter Stein to design David Harrower’s Blackbird at The Edinburgh International Festival. I met Peter because I had worked as an associate for a few years under the master opera lighting designer Duane Schuler, who designed many of Peter’s shows. Duane was a very important mentor in my life and gave me many opportunities along the way. He was not available to design the play so Peter felt I was up to the task. Blackbird was a critical success in Edinburgh and thus transferred to London’s West End. But the most recent lucky break came to me from director Jack O’Brien. Jack had seen a few shows I designed at Lincoln Center and one day I got a call from him asking me to design The Nance starring Nathan Lane on Broadway. I could not believe my ears. Guess it worked out because it landed me my first Tony Nomination in 2013.

2. What’s the relationship like with the other members of the creative team? How much do director and set designer especially factor into your process? What else do you draw from outside that collaboration?
In the early stage of design, I always begin with reading the text and listening to the music prior to having a meeting with a director or other designers. It’s very important to get one’s own impression of the piece before being influenced by others. In some projects I am brought in before a set design has been created; and in others there is already a design in process. The director and set designer both play an important roll in my process. It’s my job to “activate” the space and transform the story into a living, breathing entity. I think of lighting design as cinematography. Is the scene a tight close-up shot? Or a wide angle landscape? While I work closely with the director to ensure the story is being told true to his/her vision and that we are perceiving the story in the right way, I believe it’s my job to transform a space into something even more beautiful and evocative than could have ever been imagined.

Once I see the geography of the environment we are working in, we create a lighting plan that contains lots of flexibility. There will be clear ideas, which get implemented in the beginning, but there is always a need to create unknown visual images yet to be discovered.

Whether lighting a Broadway show, a downtown show, or any other piece of theatre, the real creative process for me begins when we start focusing lights on stage. I never really know what a particular piece is going to look like until I get in the room and start experimenting. While I begin with a system of light that I feel will provide a piece with the right quality and variety of light, I find that there is always a secret visual code to be unlocked. Often I will see strong images revealed through a mistake. For example, I might turn on a light that happens to be pointed down into the corner of the room, not where it’s intended to go, but in this accident it may create a haunting halo around the back edge of the set, or possibly a strong shadow. The result will be something unique and beautiful which in turn leads me down a different path of how to shape that particular environment. It’s a process of discovering clues that lead to the essence of the visual language of that particular piece.

3. What are three pieces of advice you’d give to someone who dreams of lighting for Broadway?
1. Don’t be focused on getting a show on Broadway, just work hard and be passionate about your current project. Broadway will come when the time is right.
2. Be nice to everyone and don’t make enemies. It’s a small world, and everyone is interconnected. It’s your peers that will inevitably give you opportunities for future jobs.
3. Don’t spend all of your time in the theatre or studying design. Become infinitely curious about life and all things art. Travel the world. Watch the sun rise and set as much as possible.

4. You designed three Broadway shows this season. What was the biggest challenge of each and how did you overcome it?
Significant Other, by Josh Harmon at The Booth Theatre called for wide variety of locations to occur simultaneously throughout the play. The set, by Mark Wendland, is a fixed wall of various rooms and compartments, almost Escher like that was only visible when lit from the inside. We used many practical light fixtures such as fluorescents, various incandescent lamps, and strong sources of light to activate each space. The playing area downstage had to be carved into many tight actor spaces because there were multiple scenes happening in the story at the same time. Basically I created a light plot that was extremely versatile in order to have the most flexibility for control, and created a ton of cues for each moment.

Dear Evan Hansen, currently running at The Music Box, required a perfect fusion of lighting and video to tell the story. The scenic space is an empty black stage that consists only of movable LED panels, scrims, and minimal props that can be positioned in various spatial configurations; the set serves as a blank canvas to create the visual information for the story. While an empty black space may seem like a daunting challenge, we found it to be a unique opportunity, allowing the possibility to create infinite environments. The light itself effectively becomes the scenery to form a multitude of locations such as Evan’s bedroom, the Murphy’s home, the school, and the online virtual world through which the story develops. In addition, the illumination serves as glue between the characters and projected images in their surroundings, blending the elements into a picture that looks believable to the eye. Working together with director Michael Grief, set designer David Korins, and video designer Peter Nigrini, we created a physical composition of screens, panel, and furniture positions for a specific scene. Peter and I would then work in tandem to blend the lighting, video, and actors into a picture that looked cohesive. The panel positions always defined what was possible in terms of angle, so there would always be discussions between the collaborators on how to place the panels and screens in positions that allowed the video content to do it’s work, while still allowing for dramatic lighting angles that merge the picture. Thus, we had to create a lighting scheme that was extremely versatile in order to serve the immense requirements of this story, physical and emotional.

Charlie and the Chocolate Factory, currently running at The Lunt Fontanne Theatre, has, by far, presented the most challenges of any Broadway show I’ve designed to date. The list is so long there is not enough room in this article to adequately describe them all, but needless to say it was one of the most exciting shows I’ve ever worked on. One of the big challenges in the show is in Act 2 when the Oompa Loompas first appear. The puppet designer, Basil Twist, imaginatively rendered these little guys and each one consists of 2 people to operate the puppet. The team decided early on that we would not try to hide the fact that they are puppets and thus, “let the audience in on the illusion”. But we wanted the first appearance of them to be strange and mysterious. We discovered that by lighting the white bodies from below with footlights, it made them float in a strange and beautiful way while also hiding the puppet operators upstage of them. We also used tightly focused, high colored saturated sidelights to pop their little bodies in various numbers. There are other Oompa moments when we allow the stage to be more brightly lit, thus revealing the full mechanism of the Oompas and their operators, which always gets a good laugh.