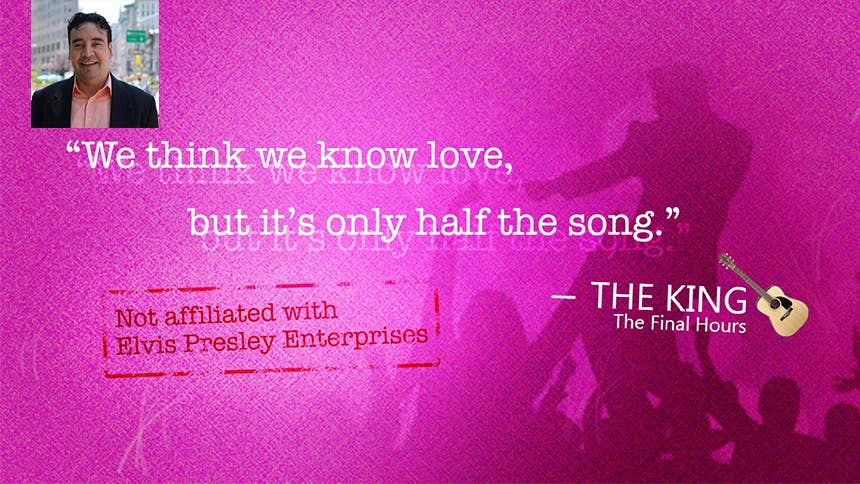 . The play—running at off-Broadway's Producers Club Theatre October 17-28—imagines the King’s internal conflicts in his final moments and stars Brett Bullard as The King. (PS: It should be noted that this theatrical play is not affiliated with the Elvis Presley Enterprises!).

If given the chance, what choices would you do differently? The unauthorized story of what the King faced in his final hours. #thekingthefinalhours . . #deepthoughts #offbroadway #jukeboxmusical #broadway #thingstodoinnyc

Thursday marks the 41st anniversary of Elvis Presley’s death. What do you think went through his mind as he realized his life was coming to an end? Did he turn to his religious upbringing and call out to God? Or maybe he wished to revisit those he loved most.Of course, no one knows what went through Elvis’ mind, but our new Off-Broadway play, The King, The Final Hours, explores these themes from an artistic perspective. It’s the first off-Broadway or Broadway play to delve deeper into the final hours of his life. The King, The Final Hours is not affiliated nor endorsed by Elvis Presley Enterprises. It’s an unauthorized look that explores the internal struggles The King faced—and they’re stories that are often overlooked by the Elvis Presley branding machine.

The US Government Was the First to Prescribe Drugs to Elvis


Most people know Elvis battled with drug addiction but few know the US government was the first to prescribe him drugs while he was serving in the US Army. At the time, Elvis drove a jeep and was frequently forced to stay up for long hours. The government prescribed many GIs “uppers” to keep them awake in their monotonous overnight routines. Unfortunately for Elvis, he continued to rely on those drugs for the rest of his life. He did stop taking them for a time as he prepared for his comeback satellite tour in Hawaii but fell back into them after the concert was over.

Elvis Was In Love with an Underage Teenage Girl


Even if you weren’t alive on May 1, 1967, you probably know that Elvis married Priscilla. At the time, Priscilla was 21-year-old, which is acceptable even by today’s standards. But Elvis first began secretly seeing Priscilla in Germany when she was only 14 years old. Two years later, 16-year-old Priscilla lived with the 26-year-old Elvis in Los Angeles and Las Vegas but the Colonel Tom Parker—Elvis’ manager—did everything to keep it out of the public spotlight.

If you dig deeper, you can also read news stories that talked about Elvis bringing other underage teenage girls into his bedroom. But it was reportedly clean fun. Elvis allegedly just took Polaroids of the underage girls, dancing on the bed in their underwear.

Elvis Had a Twin Brother

It’s a story that is sadly rarely told by the branding machine. From an artistic perspective, this tragedy provides a closer look at how Elvis was molded as boy. People close to Elvis frequently described him as a mama’s boy. The fact that his mother, Gladys, lost a son at birth had to have made her more protective of her only son. It also explains why the older Elvis craved to be loved by strangers. It was in his DNA from birth.

Elvis Was In Love with Two Women at the Same Time


Ann-Margret was one of the biggest stars in Hollywood when she met Elvis on the set of Viva Las Vegas. She had just finished a blockbuster movie, Bye, Bye Birdie, and the media was calling her the female version of Elvis. People who saw them on the MGM lot described a powerful and visible chemistry between the two.

On any other day, this would make a great love story with the media. But at the time, Elvis was already in a relationship with Priscilla, who by this time, was back home at Graceland.

Still, the tabloid reporters had fun at the time, reporting that Elvis and Ann-Margret were in love and engaged. I’m sure that put Elvis in an uncomfortable position when his girlfriend back home questioned him about it, which she did. Every time Priscilla confronted him about the affair, Elvis told her they were just made up stories. Making matters even more heartening, Priscilla was an insecure teenager battling for the affections against a more experienced Hollywood sex symbol.

The Story You Haven’t Heard


I’ve been an Elvis Presley fan since I was a little boy. Throughout my life, I consumed biographies and documentaries, hoping to see a more intimate side of the King. Yet, every time these stories were over, I was disappointed. I wanted to see the personal struggles that Elvis faced in life, and I yearned to hear an interpretation on why the artist who had everything—money, fame, charisma, looks and talent—was always in search of more.

If you don’t find it, create it. If the market is there, the people will come. I honestly believe The King, The Final Hours will take baby boomers back to their youth and introduce a new generation to the powerful entertainer who became the most famous man on Earth.