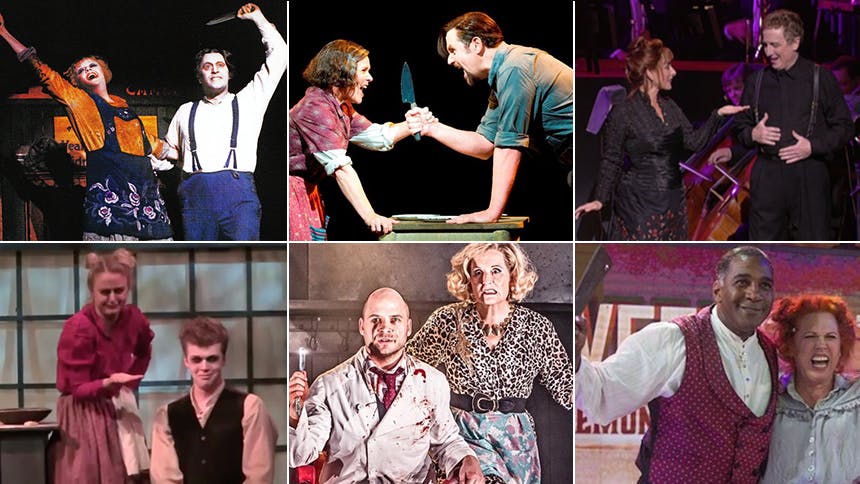 Fans of musical theatre, fans of Sondheim, and especially anyone with a passing familiarity with his dark masterpiece Sweeney Todd NEED to see the acclaimed Tooting Arts Club off-Broadway revival before it concludes its record-breaking run at the Barrow Street Theatre on August 26. Not should see—need to see!


To send off this stunning off-Broadway musical, here are seven of the absolute most delicious renditions of the Sweeny Todd’s Act One closer, “A Little Priest”. This is the moment in which Sweeney and Lovett decide killing people and putting them in pies is their new business model.


The acting is so incredible, and it’s all delivered so deliberately. Michael Ball’s voice is aces, and that ending never ceases to deliver chills. Wish this West End production transferred to B’way.


This is the only video of Carolee Carmello and her epic Mrs. Lovett from this same off-Broadway revival. Here she is opposite Tony nominee Norm Lewis and his beautiful, rich baritone.


There’s something so cheeky about this performance from the Welsh National Opera. Their chemistry is next level. For once, I believe these characters could have a sexual relationship, which is clearly what keeps poor Mrs. L hanging on through murder and cannibal pies. Additionally, because of that playful spark, the delivery feels original—I’m buying everything they’re selling.


This is from the concert version Patti did before the last Broadway revival. While there are other versions of Patti performing this number, I always thought her performance here was tops. She is the queen of unique line readings.


Vocally, few Sweeney’s bring the power Bryan Terfel does, and Maria Friedman is one of the first ladies of the British stage, so she’s obviously bringing it at a full 100. The combo of the two is electric.


This is from the 2014 Stagedoor Manor production and begins around 4:15. The fact that these are teens blows my mind! It’s REALLY funny and clever, and it doesn’t feel like they are trying to mimic any of their predecessors. Ben is BEYOND, and Caroline is feral and fabulous. Bravo, kids!


Since there is no YouTube clip of the OBC stars of Broadway’s Sweeney Todd in the original production, we defer to when the pair reunited and reprised their Tony Award-winning performances 25 years later for Sondheim’s 75th anniversary. Damn, if they are not just as funny and sharp. Every beat is there, and the performances are truly just as luminous.