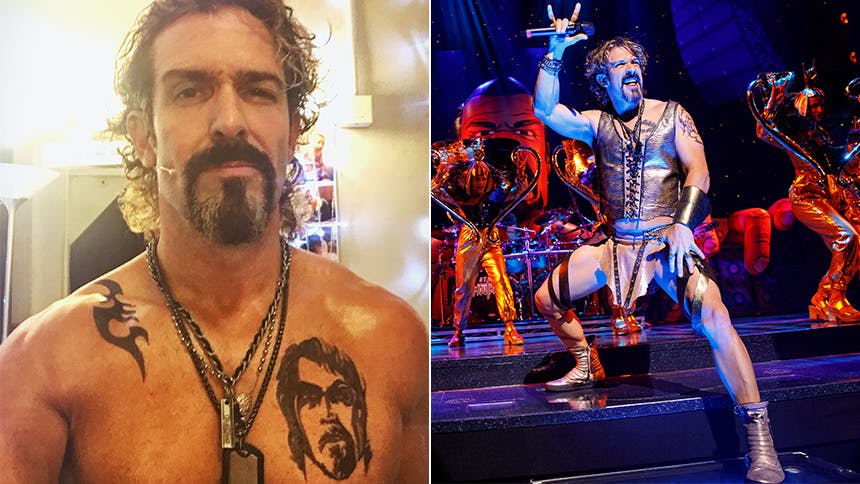 Comic Brandon Williams makes a scene-stealing Broadway debut as the repugnant (yet hilarious) Tygen Billows in Gettin' the Band Back Together. The villain of the new musical comedy, Tygen is a total jerk and the frontman of the local band Mouthfeel. He also just happens to be a real estate hot shot in Sayreville, NJ and plans to foreclose on a bunch of his high school rivals homes if they don't challenge him and Mouthfeel in the town's Battle of the Bands. You can get a glimpse at Tygen's big BOTB redemption moment below.


BroadwayBox gets to know Brandon a bit better as we talk about crafting this LOL featured performance, his award-winning work directing TV commercials, and an audition fail.

1. How did you go about building this crazy character?
I've been working on this role, Tygen, for over 8 years in readings, workshops, labs, performance, and the weight room. That and 20 years of stand-up comedy helped me understand how to work the crowd and strut like a peacock.

2. Who is your favorite villain from a comedy?
To me, a true comedic villain doesn't ever think of themselves as bad. It's the exact opposite. Hands down my two favorite villains would be Ricky Gervais in The Office and Larry David in Curb. I'm a big fan of villains that see themselves as heroes but are accidentally offending people with everything they do.

3. Is there a comedy could you watch and laugh every single time?
I could watch Shawn of the Dead every day for the rest of my life and it would never get old. Simon Pegg and Nick Frost are comedy genius.

4. Who was your first call when you found out you’d be making your Broadway debut?
When I got the offer, I called my best friend/comedy writing partner (my wife, Sheila) to which she replied, "I think you have the wrong number."

5. Tell us a memorable audition story.
I once auditioned for the creative team for a new Broadway musical comedy and took a risk by singing one of my (possibly offensive) stand-up comedy songs. My original song was a poor choice to say the least. Everyone in the room looked shocked, except for the casting director....they looked embarrassed. Only the writer stood up and applauded, and said, "You are a crazy M.F." I then asked if he wanted me to read from the script. He said bluntly, "Nope!"

7.  What’s your pre-show like for Gettin’ the Band Back Together? Do you listen to anything special?
I share a dressing room with Jay Klaitz and we both like to turn up our music loud and rock out. Our preshow music ranges from Rage Against the Machine to King Gizard and The Lizard Wizard. Our dressing room is directly across from Stage Management. They tend to close their door at half-hour.

8. You also direct TV commercials. Which are you most proud of?
My directing partner (Dave Bradley) and I, directed an IBM spot last year the spoofed the relationship between the ad agency and the client where IBM's Watson saves the agencies creative with analytics. We cast some incredible comedic actors and I think we really nailed the culture of the client/agency relationship. Here's a link.

9. If we were going to watch just one episode from your webseries Stay-At-home- Dad, which would you suggest checking out?
I got the pleasure of working with skating icon Tony Hawk in season 3 of The Stay-At-Home Dad. He was so great to work with, and I think the episode is the epitome of my favorite thing in comedy: incredibly awkward moments between people.


10. What have your interactions been like since you’ve been sporting the Tygen look every day?
Well, before, I was just a normal non-threatening middle age dad; but now that I have blond highlights, a tangerine spray tan, and numerous stick on tattoos, I get eye rolls and dirty looks from strangers. I kinda love it.

Don't miss Brandon Williams B'way debut in "Gettin' the Band Back Together" at Broadway's Belasco Theatre.