Making It Happen: A Blanket of Dust Playwright Richard Squires Discusses Bringing 9/11 & Antigone Together to Spark a Major Debate 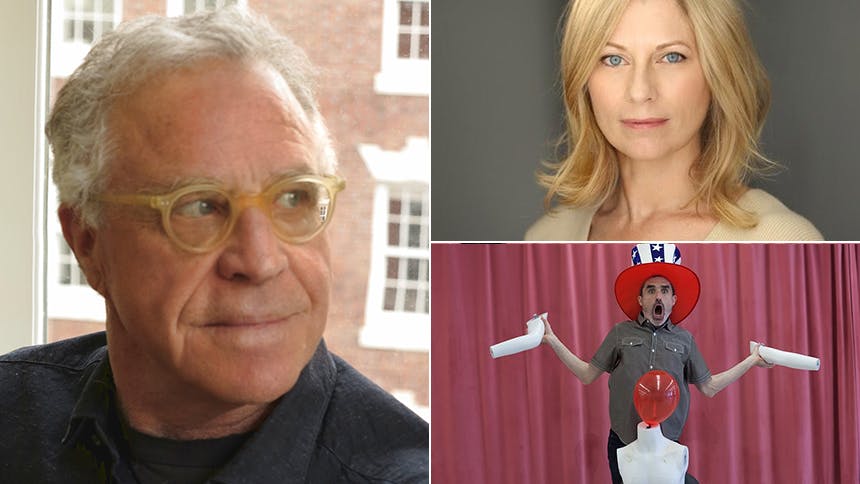 , which follows a 9/11 widow as she seeks justice for her husband and the actual answers behind the fall of the World Trade Center. The world premiere production runs off-Broadway at The Flea Theatre through June 30, and stars Angela Pierce, Alison Fraser & Tommy Schrider.


BroadwayBox caught up with Richard to discuss the inspiration for the play, where audiences can go to learn more, and creating a poetic thriller for the stage.

1.  Where did the idea come from to conceive this play that blends the Greek tragedy Antigone and 9/11?
My first idea came when the war drums began for the invasion of Iraq.  It was clear to me that the given reasons were fraudulent, and if I could tell that from my living room I felt certain that the White House and the Congress must know it too.  It was the second of some nine or ten unprovoked aggressive wars that the US has embarked on since 9/11, and it seemed to me that the citizens had no voice in this conversion of our country from a democracy to a military empire.  Does popular sovereignty have any meaning to us anymore?  What could a single person do?

Looking back, it seemed to me that whether you thought the government colluded with the events of 9/11—or only opportunistically capitalized on them beginning on 9/12—in either case the country clearly suffered a right-wing coup d’etat.  General Wesley Clark made much this same observation in his presidential campaign of 2004.

The Patriot Act and the Authorizations for Military force laid the groundwork for a military empire abroad and the suppression of our civil rights at home.

That’s the background of the story.  In the foreground is the story of a woman—Diana Crane—from a prominent family whose husband has been murdered in the World Trade Center.  Her father is the ranking senator on the Intelligence Committee; her brother a national reporter for the Washington Post.  Although they know the truth about the government’s new war hysteria, they cannot act without becoming pariahs themselves.

They are impotent, therefore, to assist in her quest for justice for her husband’s death.

It was only after I’d written the play that I recognized the parallels to Antigone, who like Diana only wanted to bury her loved one, slain through an act of war; and like Diana was only met with indifference and hostility by her government.

2. What was your research process like here? Did you dive deep into 9/11 truthers? Did you talk to 9/11 widows?
The government’s indifferent treatment of the 9/11 survivors is notorious, inexplicable, and widely documented.  I spoke at length with one such widow, and became friends with another survivor, a man, who lost his son.

I’ve read widely from both sides of the issue on the subject of the attacks.  The play is an attempt to understand the issue from a multitude of perspectives.

3. If an audience members wants to do more research on the topic after leaving A Blanket of Dust, is there a book, film, article you recommend starting with?
More than 3,000 licensed architects and engineers have gathered to declare that controlled demolition is the only plausible explanation for the destruction of the World Trade Center.  These expert witnesses have an organization, www.ae911truth.org with a wealth of information and further links for those seeking the facts of the case.

4. What’s the biggest challenge in writing a thriller for the stage as opposed to other mediums? How did you overcome it?
In a thriller, of course, you have to keep things moving.  My natural style is terse and trim, so the format is a natural for me.  I also think of plays—at least the plays I write—as long extended poems, which also emphasize economy of style.  So, in a funny way thrillers and dramatic poetry have something in common.  I mention that because the other great challenge is to make the language of the play as beautiful as I can.

Don't miss Richard Squires' 'A Blanket of Dust' at the Flea Theater through June 30.