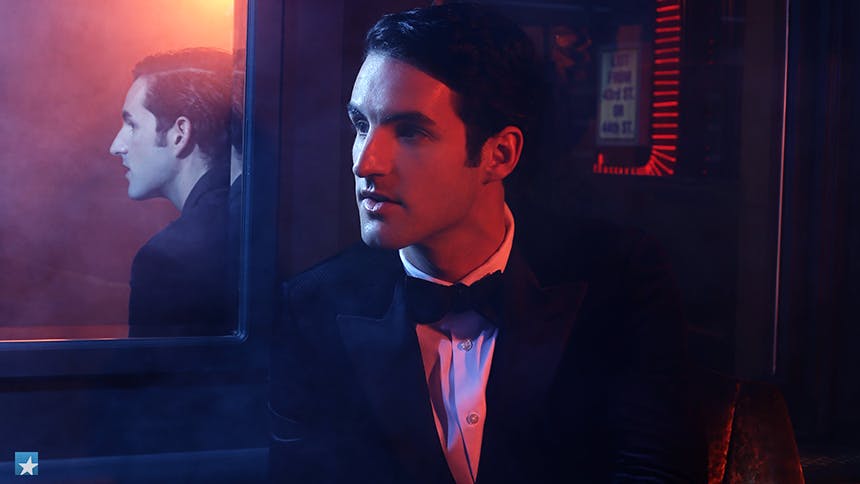 BroadwayBox teams up with photographer Curtis Brown to present "Ushering in a New Golden Age", an exclusive photo and interview series in which we spotlight the breakout stars from the 2018 Broadway season and style each like Broadway's original age. This illustrious crew of Tony nominees, Drama Desk nominees, and fan favorites was photographed at the beautiful Hudson Theatre (home to next season's new musical Head Over Heels). Closing out the series is John Riddle, who made his Broadway debut as Young Anton opposite Chita Rivera & Roger Rees in The Visit and now stars as the duplicitous Prince Hans (the 13th son of a king of a very small kingdom on the Southern Isles) in the hit Disney musical adaptation of Frozen


1. Was there a big role in high school or college that gave you the confidence to pursue this?
Well my grandma saw every show I’ve ever been in, and, if you ask her, she will say my Harold Hill [in The Music Man] was just absolutely out of this world. That was when I was a sophomore in high school. And I have to say, I was pretty good because I watched the movie every night while we were rehearsing, and I probably did a carbon copy of Robert Preston, and he was really, really good in that.

2. What has changed most in your life since taking on this role?
Honestly, it’s actually not that different. We’re still people. I still get on the train every night, but I guess the difference is you get recognized a little more on the street or people want to talk to you or get your picture on the train when I go home to Brooklyn. Other than that, we are just people and it’s our job that we go to every night.


3. This series is all about this Broadway season’s breakout performers. If you could time machine back and see any big Broadway icon’s breakout stage performance, whose would you want to go back and see?
I’m a huge Patti LuPone fan—which is a stereotype of all stereotypes—so I would love to see her Evita back in the day. But also, I was obsessed with Thoroughly Modern Millie in high school so I would probably go back and see Sutton do that. Talk about a breakout—that’s the breakout of all breakouts.

4. What’s the most sentimental thing in your dressing room?
I have a picture of my grandma in my dressing room. She was my big cheerleader. She drove me everywhere—all my lessons. We used to call her the box office, because she would buy all the tickets to all the shows that I was in and then dole them out to her friends. She passed away five years ago now. She never got to see me on Broadway, but I know she’s hanging out up there with a big smile on her face. She would be absolutely thrilled for this.


5. What’s been your biggest obstacle in reaching the point where you’re leading a new Broadway musical? ?
To just keep going. There have been so many times you audition for something, and pour your heart into it, and think this is going to be the one, and it doesn’t work out. Then you pull your boot straps back up, go for the next one, and get over yourself. You just keep doing that, and that’s what separates the boys from the men.

6. You are originating the role of Hans onstage. What advice would you give to future actors who will one day play Hans in Frozen—be it on Broadway, on tour or at their school?
He’s a real person with real emotions and real feelings. I read somewhere that evil comes from heartache, so in playing Hans it’s about finding where the heartache comes from. This is a guy like everybody else who just wants to make the best journey for himself. Find the humanity, find the heart, and find the reason.