Let’s Talk About the Leading Ladies of This Broadway Season 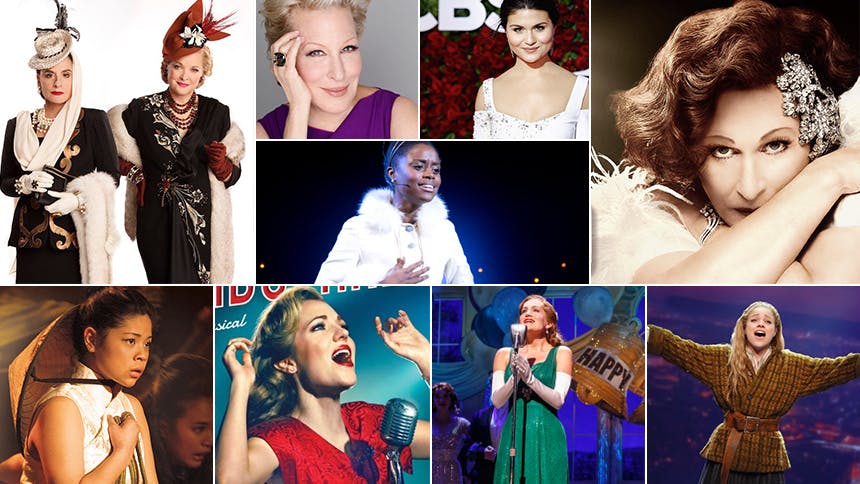 If you worship at the altar of the Broadway diva, it doesn’t get any richer than the 2016/2017 season. Below, we look at the musical leading ladies we can’t wait to leap to our feet for come curtain call time.

Kicking it off with Glenn because she isn’t Tony eligible (having won the award for the same role in 1995). Glenn’s return to the Norma Desmond staircase in Andrew Lloyd Webber’s musical won absolute raves in London, and it’s sure to be a big theatrical event this spring. Yes, Glenn Close will be the decadent dessert of the season, but the real meal is this leading lady Tony race*.


’Cause it’s a natural transition all things considered. The two-time Tony winner is back as cosmetic trailblazer Helena Rubinstein, and she’s putting that Acting Company training to work in this gorgeous new musical—she’s doing an accent, she’s giving you that Patti belt, and she’s even serving subtle Evita moments, looking in that mirror like it’s “High Flying Adored”. Get ready for La LuPone in full force.


Sharing the marquee with Patti at the Nederlander is Christine Ebersole. The two-time Tony winner is teaming up once again with the guys behind Grey Gardens, and boy do they know how to write for her talent. Get ready, by spring, we will all be talking about her 11 o’clock Elizabeth Arden showstopper “Pink”.


We close out the grande dame section with Bette as Dolly (no last names necessary here). Bette hasn’t been in a traditional Broadway musical since Tzeitel in Fiddler in 1969, so this is a moment an entire generation of theatre fans and Midler fans have waited for. No wonder she’s already the hottest ticket in town.


Now let’s jump back and do this chronologically. Lora Lee Gayer is BEYOND as sweet teacher and reluctant starlet Linda in Holiday Inn. She is serving you Debbie Reynolds MGM-era realness with her crazy tap skill and beautiful voice. She’s Christmas, Valentine’s Day, and the Fourth of July all rolled into one.

For her Broadway debut, Denee is the title character in one of the year’s most anticipated musicals, and boy does her Natasha have a story arc. She goes through it in a major way, all while singing her beautiful soprano face off. It’s sure to be a breakout moment.

Now a pretty big jump into the spring season, assuming a lot of new musicals have leading men and featured women.


I was #blessed enough to see Eva perform this role in London and I’m still shook. Her performance as Kim is undeniable. Broadway better be prepared to have their heart broken and their praise hand ready.


This year really can be separated into award-winning divas and young leading ladies giving breakthrough performances. The title star of the musical adaptation of Anastasia falls into the latter. Just about everyone I’ve run into is waiting with bated breath to hear her soaring “Journey to the Past” live on Broadway.


Y’all are not ready for Laura Osnes as the most talented war window ever in this beautiful & moving musical. She has a one-two punch of “Love Will Come and Find Me Again” and “Welcome Home” that will completely change the way you think of this Tony-nominated Broadway ingénue.


The Hamilton Tony nominee could very well end up opening this magical musical on Broadway this spring, making her the dark horse of the Tony race.

* Based on confident assumptions (like SJB, Jenn Colella, and Leona Lewis are featured or Lora Lee is lead)

Amelie, A New Musical
Best Priced Tickets
Newer
Hot Clip of the Day: Get Ready for the Magic of Marin Mazzie, Judy Kuhn, & LaChanze in Nothing Like a Dame
Older
Jukebox Life Star Jarrod Spector Reveals Three Dream Roles Off His Broadway Bucket List
Sign up for BroadwayBox Discount Alerts