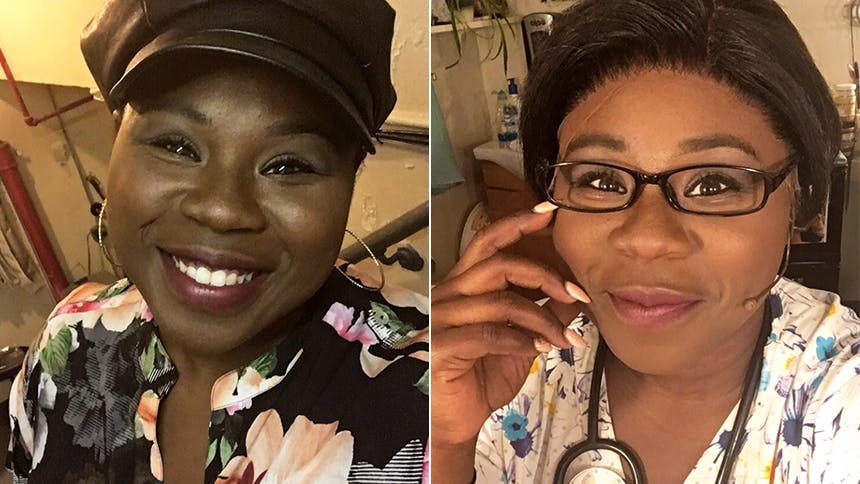 Tiffany Mann makes a hilarious Broadway debut performance as the scene-stealing, shade-throwing Nurse Norma in the hit musical Waitress. Tiffany first came on our radar years back thanks to her incredible high school Dreamgirls moment and we've been waiting for her debut since. On TV, Tiffany co-starred as Cheryl on NBC's Rise and Taystee's mom on Netflix's Orange Is the New Black. This winter, she gave a Lortel Award-winning performance as Shawntel/Eve in the New Group's production of Jerry Springer – The Opera.

Below, BroadwayBox gets to know Tiffany as she talks about discovering her voice in Church, her path to Broadway, and creating her own Nurse Norma.

1. Who was your first call when you found out you’d be making your Broadway debut in Waitress?
I immediately called my mom. I was a blabbering MESS! She had to keep asking me to repeat myself. All I could do was let out fits of maniacal laughter mixed with tears. Ya know...I was Suuuuper chill about (not!).

2. What’s surprised you most about joining this company?
I was pleasantly surprised by how welcoming everyone was. I was expecting to be on my own for a little while and have to work to make friends. The cast and crew made me feel like I was a part of the Waitress family from day 1.

3. What did you want to bring to your Nurse Norma?
I wanted to bring my Aunt Marilyn to Nurse Norma. She is a retired caregiver with INCREDIBLE wit and real passion for her work. Plus she sees ALLL!

4. Do you remember the first time you knew your voice was special? How did that happen for you?
I was 5 years old in my church choir back in TX, and we were learning a new song. The choir director was teaching the sopranos their part and I was SUPPOSED to wait till he was finished, but my heart...no no no... my SPIRIT needed to sing....plus I already knew the song. So, I began singing the song out loud by myself.  I remember people saying, "go 'head then baby!!!"

5. Favorite set memory from RISE & from Orange Is The New Black?
In between takes of RISE, me and the other actors who played the "troupe" would blast Cardi B's "Bodak Yellow". We had soul train lines and everything.

While I was on set for OITNB, I had NO clue what I was doing. Danielle Brooks would pull me aside and explain things to me here and there. She really looked out for me. THANK YA GIRL!

6. Where do you keep your Lortel Award?
BAY-BEH!!! She is in the mail on her way to me.  I have prepared shelving, lighting, a fog machine, and cute Beyoncé music so that when she arrives she will be treated like royalty. Hahah!!

7. What did you love about your Jerry Springer experience?
There is so much to love! I got to sing some beautiful music. Although, I slept on the OPERA part of Jerry Springer: Opera. (That. Score. Is. Challenging).  Plus, I got paid to play and have a potty mouth. #winning

8. Craziest story from working at Ellen’s Stardust Diner?
They should put crazy in the name cause something crazy happens there every day.

9. What cast recording were you completely obsessed with growing up?
I was obsessed with Hairspray. My sister and I would make costumes and wigs out of sheets and towels and we would go to TOWN!

10. What’s been the biggest challenge of your career so far?
My biggest challenge has been balancing career and self-care. I do a good job with the hustle: auditions, workshops, rehearsals, shows, concerts, readings, fundraisers...but I am learning when I need to rest. Rest is just as important as the work. It enables you to do your best and have a clear mind. I'm thankful for my close friends who know when to tell me to sit down somewhere!