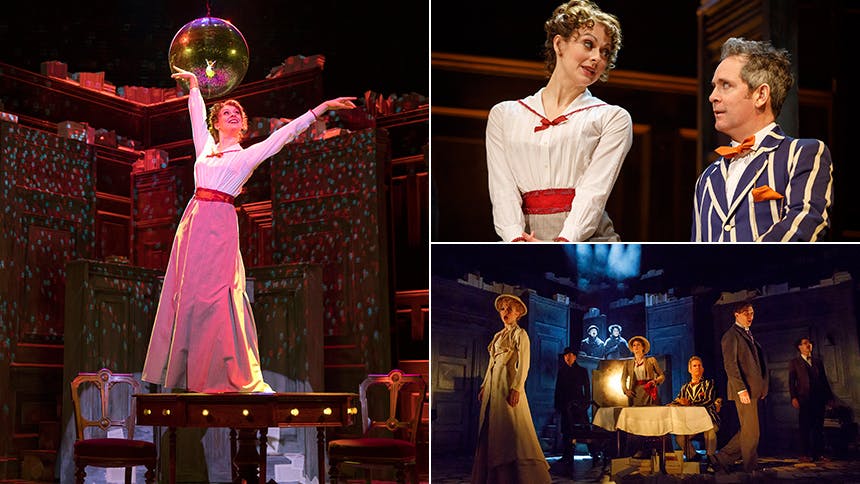 Sara Topham brings major laughs as the Lenin-obsessed Swiss librarian Cecily in Roundabout Theatre Company's Tony-nominated revival of Tom Stoppard's Tony-winning comedy Travesties. (Got all that?). You'll leave the American Airlines Theatre talking about her incredible, hilarious act two tea scene and song with Scarlett Strallen. Sara previously appeared on Broadway in the RTC's revivals of Thérèse Raquin and The Importance of Being Earnest. Her vast credits at the Stratford Shakespeare Festival include everything from Saint Joan to Juliet.

BroadwayBox caught up with Sara recently to discuss what audiences should know and expect walking into Travesties, her advice for mastering Shakespeare, & why Earnest was so important to her.

1. This is such a unique piece. What do you tell friends and family about Travesties before they get here? What should people know before walking in?
First of all, I usually say it’s more fun than it is hard. It’s intellect with a healthy side of circus. Patrick Marber (our director) was keen on saying, ‘Part of your job is to reassure the audience that they are not going to get everything, and that’s sort of the point. You are not failing as an audience member if you don’t get everything.’ I sometimes send them the guide from the education department at Roundabout, because I think the Travesties one is particularly wonderful. I think Travesties is like a piñata—you might not get every piece of candy that falls out of it, but you’ll get some you’ll love right away and you’ll get some you put in your pocket and take home and enjoy later.

2. The tea scene between you and Scarlett Strallen was my favorite part of the entire night! I wish it was on YouTube so I could watch it daily. What was it like to find that moment?
Our first connection with it was really singing it—singing it with actual pitches in actual rhythm, like it’s an operetta number. So, we got that in our bones because then what we are doing on top of that is slightly jazz—moving between singing and speaking. It’s not as fun or exciting or dangerous if you were in the same rhythm all the time. It’s the tension between the rigidity of the structure of the song and fitting these big emotional responses they experience inside the structure that makes it fun and exciting.

3. Your Stratford Shakespeare Festival credits alone are a dream career for most actresses. Which did you enjoy most? Which challenged you most?
Oh gosh it’s like being asked to pick what your favorite child is. The thing that made me want to be a classical actor was playing Juliet in high school when I was 16. At that time, I had a copy of the Stratford edition of the play that had photographs of Seana McKenna in it. I modeled some of my Juliet after her. I did her gestures from the photos in my performance in high school because I wanted to be just like her. So getting to play Juliet on that stage, and working with Seana in Blithe Spirit was a very, very special experience for me. It was the closing of a circle.

The thing that challenged me the most, in that it literally changed the direction of my career, was Cassandra in the Greek play Agamemnon. I had never done anything like that before. I had always played sweet girls in pretty dresses. In that production, I was covered in mud and went into trances and seizures. I didn’t know I could do that and certainly nobody else knew I could do that. So because of that, I got to do different kinds of parts that I wouldn’t have had access to if people continued to see me as the sweet girl in the pretty dress.

4. If you were going to sit down and watch either your filmed Twelfth Night or your filmed The Importance of Being Earnest, which do we watch?
I would pick The Importance of Being Earnest because I think that production brought together great artists who were really beautifully matched and part of a generation of theatre makers we are losing. Desmond Heeley, who designed the set and clothes, passed away a couple of years ago and Brian Bedford, our director and Lady Bracknell, passed away as well. I feel fortunate because I was one of the last younger actors who got to work with both of them and learn what they know. Desmond designed for Margot Fonteyn and Olivier and Vivien Leigh; he knew how to create illusion. The chandelier in that production was built out of plastic spoons and forks and champagne glasses and packing tape but it’s the most sparkly crystal chandelier I've ever seen on a stage, ever. I think what they did together on that play—because they had known each other so long—was a kind of magical, theatre-making that is very rare. That’s why I would pick that.


5. It’s such an art to perform Shakespeare and plays as dense as Stoppard. What advice would you give to young performers, who are tackling these roles in schools and regionally, that fear getting lost in the language?
I have to quote Brian Bedford. He would say, ‘You have to take the language into you and digest it fully so when it comes out of you, it’s yours.’ I think part of the process of being an actor is learning how do I digest language? For some actors, it’s moving with language; for some it will be singing it; for some it will be looking at images. I use a lot of music when I’m acting. I always have music that’s connected to the play for me. For Travesties, I listened to Beethoven’s ‘Appassionata’ a lot. It’s in the play and something about it speaks to me about what Stoppard is trying to do with the play. But part of your job is figuring out how you make Shakespeare or Stoppard come out of you in a way that’s entirely unique to you so when you are saying it, you're just talking. You're not doing anything crazy with language, you are just going to talk.