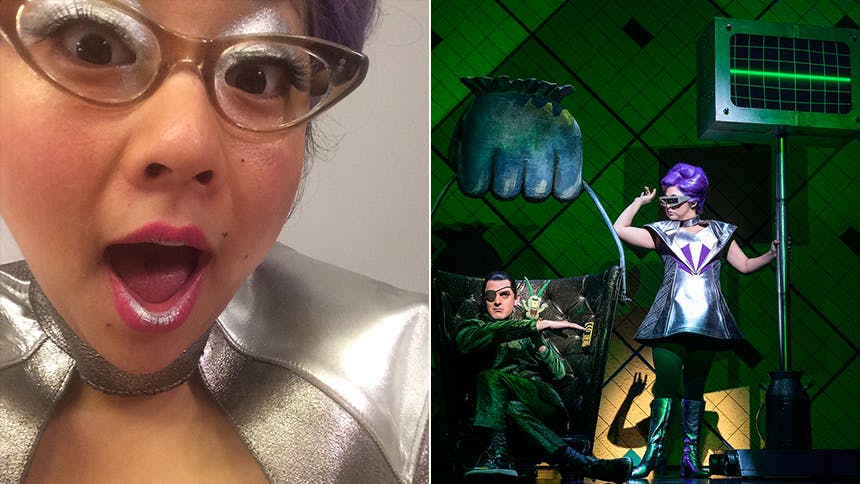 Stephanie Hsu makes her Broadway debut as Karen the Computer (the sidekick and wife to Bikini Bottom's villain, Plankton) in SpongeBob SquarePants. Get to know Stephanie a bit better as she talks with BroadwayBox about the crazy fun the cast has in Bikini Bottom, life on set of Hulu's drama The Path, and her Be More Chill experience.

1. Who was your first call when you found out you’d be making your Broadway debut in SpongeBob:
I honestly can't quite remember! But I bet Allan Washington, who plays Larry the Lobster and is one of my besties/husband/sister-wife, was on the top of that list! I was so excited that we were going to be embarking on this journey together!

2. How has Karen changed from Chicago to NYC:
The thing that I miss most about Chicago Karen is her beatboxing ;) but other than that, she is the same ol' wicked sassy self.

3. What’s a small moment you have with your Plankton, Wes Taylor, that you love:
My favorite moment with Wes happens on stage and almost completely in the dark! There is a part during "Tomorrow Is" after we sing when we look at each other deviously and sort of saunter and shimmy back upstage and it is so satisfying every night! Partially because it is so devious and partially because it is so incredibly "extra" even though we are not lit at all. It's a fun little "easter egg", you might say.

4. What’s your pre-show like for SpongeBob:
I love my pre-show ritual for SpongeBob! Jai'Len Josey and I usually play some groovy hip-hop/soul/mo-town music while we are doing our make-up and wig prep, and then we do a vocal warm-up together. I stretch and do some yoga—things to get my body warmed up! And I always do at least one hand stand by a wall before the show! It helps me get warm, and turn on the "fun".

6. What is your favorite on-set memory from The Path:
I have two! There was a day on set for season 3 where I got to smash a car! I highly doubt it'll make the cut, but basically what happened was another character was asked to smash a car with the baseball bat, and the cameras just kept rolling because everyone knew it'd be fun for some of us to jump in on smashing the car too. That was pretty epic. And I'll never forget—after a long day shooting an episode on the first season, we were driving back down to the city from where we shoot and I was in a car with Brian Stokes Mitchell, Adriane Lenox, Peter Friedman, Deirdre O'Connell, Ali Ahn, and Patch Darragh (theater royalty!!) and I remember all of us talking about a show that some of us had seen at Ars Nova. And I just thought, how lucky am I! To be living in New York and working with all these incredible theater actors, shooting a show, and coming home talking about, of all things, off-Broadway theater. Wow. Beautiful.

7. Tell us a Be More Chill secret:
That's a good one... Well there was a small period of time where I used to get so excited during "I Love Play Rehearsal" that I used to accidentally choke on my spit ha! There was one day that it happened and I had to continue singing and I will never forget the look on Will Conolly's face. He was like, with his eyes, "Uhm....are you ok?!"

8. What’s your most memorable audition story:
I think one of my most memorable audition stories is actually my audition for Be More Chill. I had just flown back to New York from Los Angeles—I think I had just gone out to shoot something—and I came back early for a callback audition with the creative team. At the time, I was still mostly doing experimental theater and I knew Stephen Brackett had some overlaps with that community. I walked in the room and Brackett looked at my resume and the first thing he said to me was, "You were in War Lesbian?!", which was a show I had just done at Dixon Place that my friend wrote. Turns out we had a bunch of mutual friends who helped develop the piece and it was then that I knew that Brackett and I were of one artistic family. And then Be More Chill happened and now it's this crazy thing that exists in the world that has a mass following! We never knew this is how it would all unfold!

9. What that made you want to perform as a kid:
I remember doing a school play when i was in like 3rd grade? And I was playing one of the hosts for "The Garden Show", and I just loved it. I specifically remember one performance where I put the mic into the mic stand but it accidentally dropped, and I picked it right back up and put it in the mic stand properly and after the show, one of my teachers said that was "exactly the right thing to do" and I thought, "Oh! maybe I'm kind of good at this!" But then I thought (as a third grader!!) I should probably do something more practical and be a lawyer instead. Whoops, that didn't turn out the way I thought it would!

10: Looking back on 2017, what was your favorite movie, TV show, and album of the year:
Movie: Get Out. 100%. 150%, actually.
TV Show: I secretly don't watch that much TV! I should watch more!
Album: Even though it was technically a 2016 album, Frank Ocean's Blonde had a huge impact in my life for the year of 2017. And I honestly couldn't stop listening to Kendrick Lamar's Damn.

Get yourself over to the Palace Theatre to see Stephanie Hsu as the evil sidekick Karen the Computer in 'SpongeBob SquarePants The Musical'.