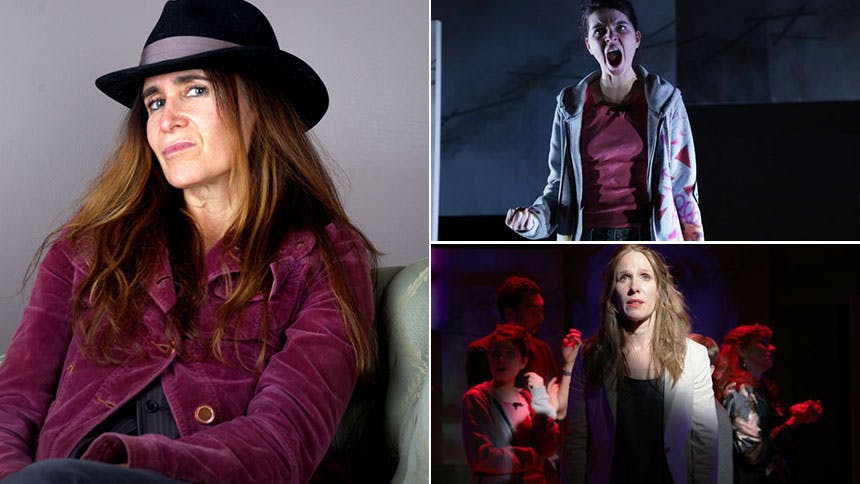 . Running at downtown's iconic La MaMa, the world premiere play is a unique family memoir about the time Marla accidentally ingested her daughter’s antidepressant and then asked her anorexic/bulimic daughter to help her throw it up.


BroadwayBox caught up with Marla to discuss finding the right tone for her piece, her process, and getting your work produced off-Broadway.

1. As you conceived this piece for the stage, how did you work to balance the seriousness of the subject matter with humor?
Initially, it was all about the humor. When the actual incident happened (I accidentally took my anorexic daughter's anti-depressant; I was terrified of medications at the time, irrationally afraid, and so I freaked out. I begged her to tell me how to throw it up, to get rid of it. Her response: "Mom, what do you think is going to happen? I've taken handfuls of these pills and nothing is going to happen to you." Although I was panicking I did realize how ridiculous and funny it all was. A mom asking her eating disordered child to teach her how to throw up. I thought, "This is going into a play one day." And I said it aloud to my kids many times over the years.

Two years ago, when my son Yanai Feldman wrote a teleplay for a sit-com, using The Pill incident as its pilot, I thought, it's time for me to write my version. I then went on to ask my daughter and my parents to do the same. Amazingly, they all did it. At the time when we all wrote our versions, the family situation was stable. My daughter's eating disorder and depression were under control, she was 23 yrs old, thriving and living in Los Angeles. My son was 19, a sophomore at Pomona College and enjoying his life. It was probably one of the best periods of time we had. So, when we began writing the play it seemed like we were talking about something that was hopefully in the past. It was easy to focus on the funny/ridiculous aspects of the story—the heaviness/seriousness is so part of the fabric, we didn't need to elaborate on that. (I was very aware of the fact that my daughter's depression could plummet at any point. She had attempted suicide in 2013 after a relatively stable 4 years. That was one of my points in writing the piece—to show that depression 'just is' and is not necessarily due to outside circumstances. No blame.) The thing is, the darker things get, the more important humor becomes. We have to see it that way. A survival technique? For sure. But it's also accepting that life is not just one thing—it's sad, it's joyous, it's ridiculous, it's tragic, it's magical and somehow we have to incorporate all of that into our daily living.

As we began working on the play, life continued. My son had an incident and was starting to feel "the black dog" himself. He called me and said, "I'm sending you a new ending to the piece." I had been working on the mashed up version of The Pill at that time for a few months (workshopping with actors) and so we were all like, "Oh no!" but what he wrote was brilliant, so we couldn't ignore it. Life continued. More incidents happened. We continued workshopping. I continued carving out the script using new information to sculpt it. Life continued to imitate art. My daughter and son both loved the show. It made us laugh at ourselves. And then on Election Day 2016 (horrible day) my daughter tried killing herself. It seemed to come out of nowhere. She came back to NYC to live with me. My son then had another incident. We had two very successful staged readings of the play in the Spring of 2017. Lael loved the play and the readings despite the fact that her eating disorder and depression had gained strength again. She hoped the play, the story would somehow help others. We all did/do. We continued to laugh at ourselves and the play. We still do.

2. What was the biggest challenge with this piece? How did you overcome it?
The biggest challenge was, as I just mentioned, was dealing with new incidents that happened along the way, how to incorporate new bits of life's circumstances into our story without losing the focus of the EVENT of the play and not straying too far away from this central event. The other challenge is dealing with my daughter's suicide. On the day La MaMa confirmed our run, my daughter, Lael, committed suicide. No connection to the play. The truth is, dealing with her death is a challenge, as a mother, it will be forever a challenge. However, it did not challenge the play. The play was written before her suicide and her death did not change the play or its ending. Everything is as it was prior. In many ways the play was my way of dealing with the very real possibility that my daughter might kill herself one day. Art does for us what we cannot do for ourselves.

3. What do you hope La MaMa audiences come away from this experience with?
I hope The Pill allows others to see that there is no shame in mental illness, no fault, no blame. In this story, there is no reason why anyone has a mental illness, they just do. My daughter said to me, "I am loved, I have great friends and family. I am just sick, Mommy." That was a very important message for me in doing this show. I've seen many works where mental illness is attributed to something external, but it has been my experience that most often it is because it is. (Perhaps genetic.) We like to blame, to explain away, to look for why, but in my opinion there is no why. There is no one way to handle it, no rules, no guidebook. It is very difficult—you swing away and hope that something connects/helps. So how does the family in The Pill handle it? By doing the best they can do. THEY LOVE EACH OTHER. THEY LAUGH, THEY SING!!! There is no underestimating the power of these three things—LAUGHTER, MUSIC AND LOVE!!

Someone described The Pill as "a cubist documentary into the lives of every family in 2018." I do believe everyone who will see this show will come away seeing a part of their own family story in it.

4. What are three pieces of advice you would share with someone hoping to have their original work produced off-Broadway?
1. BELIEVE in yourself and in the work. Never doubt.
2. Surround yourself with a committed and supportive team of creatives who get 'your vision".
3. Do the work!!! It's not going to happen without a lot of grinding—expect lots of sweat, tears, blood and guts.

The Pill – A Family Memoir
New
Best Priced Tickets
Newer
The Phantom of the Opera Turns 30! Watch Every Actor Who Played the Phantom on Broadway Singing "Music of the Night"
Older
The Fans Have Voted, and The Ultimate Grammy Award-Winning Cast Recording Is.....
Sign up for BroadwayBox Discount Alerts