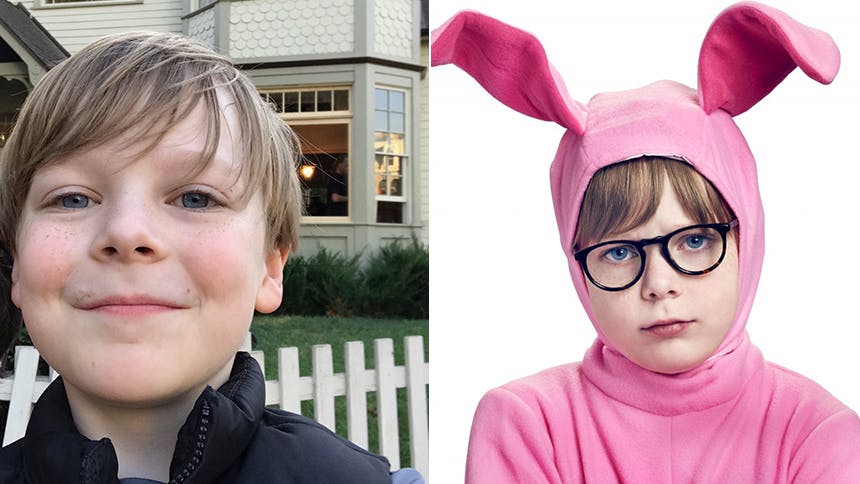 Seattle native Andy Walken gets his big break on December 17 when he stars as Ralphie (BB gun, bunny onesie, and all) in Fox's live musical broadcast of the holiday classic A Christmas Story. He leads a cast that includes Tony winners and TV stars Maya Rudolph, Matthew Broderick, Jane Krakowski, Chris Diamantopoulos, Ana Gasteyer and more. Below, BroadwayBox gets to know Andy as he talks about the greatest experience of his life, his Broadway dream roles, and keeping a bit of Ralphie after filming wraps.

1. What’s been the coolest part of the rehearsal process for A Christmas Story:
Everything about this whole project is the greatest experience of my life! I really love some of the songs and the choreography, especially "Ralphie to the Rescue"! But when I look back on this in 10 or 20 years, the part that I will remember the most is that I got to work with some really awesome actors like Matthew and Maya and Jane and Chris and Ana, and the entire cast of kids. I'll never forget that!

2. When did you first become interested in performing:
When I was really young my mom signed me up for a theater camp, where we worked on singing and dancing and performing Peter Pan, and that was when I realized that I wanted to be on stage or on camera all the time.

3. What’s your favorite moment in the original Christmas Story film:
I think my favorite part of the whole film was when Ralphie finally gets to tell Santa what he wants, and Santa says he'll shoot his eye out and then kicks him down the slide. I love Ralphie's face, when he realizes that Santa is just another grownup after all and he's lost his last shot at getting that BB gun. Or the Bunny suit. Yeah... the pink nightmare.

4. If you could keep one thing from A Christmas Story set what would it be:
The Red Rider BB gun. Or the glasses. Maybe the bunny suit. Definitely the bunny suit!

5. What’s your favorite Pasek & Paul song not from this score:
I love the entire soundtrack to Dear Evan Hansen, especially "You Will Be Found".

6. What role would you really love to play on Broadway someday:
I'd be excited to play any role on Broadway! It would be awesome to be in a Christmas Story production, but if it doesn't reopen on Broadway before I'm too old for Ralphie, I'd be happy playing The Old Man—Someday I'd love to play King George in Hamilton, or Jack from Into the Woods.

7. What’s top on your Christmas list this year:
I'm hoping to find an Anki Cozmo under the tree on Christmas morning! It's a robot that looks like Wall-E, and you can train it to play games, and you can teach it tricks.

8. What album were you seriously obsessed with in 2017:
Hamilton was my favorite album this year. I listened to it all the time, like in my room, and while I was doing homework, and even when we were driving back and forth between California and Washington!

9. What’s something you’ve learned from working with your fabulous adult co-stars in A Christmas Story:
I've learned so much from these guys, they're absolutely amazing to work with. This is my first musical performance, and I've learned how to work hard during long days of rehearsals, and try to do my very best, but still how to be relaxed and have fun and take care of my voice all at the same time.

10. What do you love most about your hometown of Seattle:
I loved going down to the beach near our old house, or riding the ferry across to Whidbey Island and back, and taking our dog for walks in the woods where we'd see deer and squirrels and rabbits. We tried taking him for a walk in the hills down here in California and found a rattlesnake in the middle of the road! Definitely takes some getting used to!

Don't miss Andy Walken as Ralphie in 'A Christmas Story Live!' on FOX this Sunday, December 17 at 7 PM.