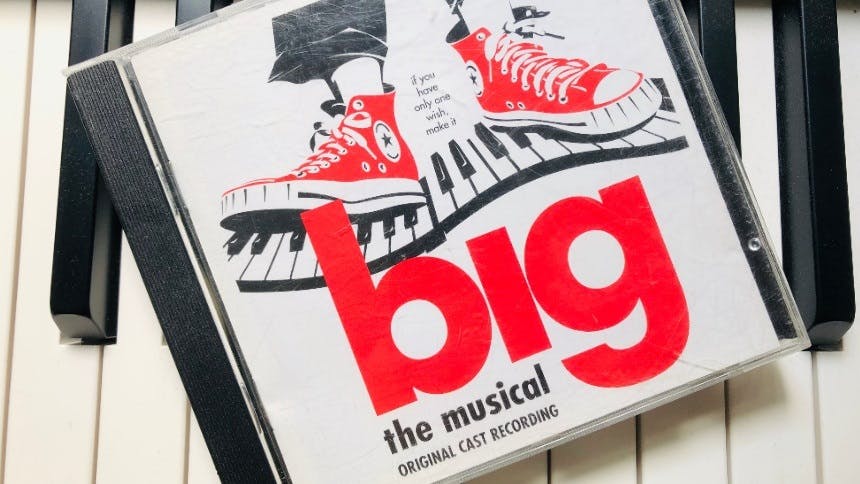 On April 28, 1996, a volt of energy celebrated its opening night at the Shubert Theater also known as big the musical.

The musical was, as you can suspect, adapted from the 1988 film starring Tom Hanks. Josh Baskin, our main character, is played by the enthusiastic Patrick Levis (Young Josh) and the ever charming Daniel Jenkins (Older Josh). After getting shut down by his crush Cynthia Benson, Young Josh goes to the carnival's Zoltar machine making a simple wish to be big. The next day he wakes up in complete shock, having become an adult, and has to navigate his way back to being a kid again. After frightening his mom (Barbara Walsh serving you all the vocals you're hoping for) and running away, his best friend Billy (the smart talking Brett Tabisel) decides to help him find a Zoltar machine to reverse his wish. Along the way Older Josh finds a job in NYC at that famous toy company and meets Susan (the fabulous Crista Moore who is an absolute gem).

At the first mention of big the musical, we are sure that you thought of that mega light up piano that our stars danced "Chopsticks" on. The colorful musical gave us this iconic moment and many extraordinary others with direction by Mike Ockrent and choreography by Susan Stroman.

To find out what happens in the rest of the show, have a listen to the cast album featuring a tuneful score by David Shire and Richard Maltby, Jr. For further research, we highly recommend the book "Making it Big: The Diary of a Broadway Musical" by Barbara Isenberg. The book provided a super detailed account of the show's road to Broadway from its audition process, Detroit tryouts, numerous script changes, star injuries and award show competition - this musical encountered it all. We can thankfully enjoy the show anytime via this cast album by this marvelously talented cast and its incredible score.


Follow us track by track expressing ourselves not just with text but with some GIF reactions for "Fun" on their opening night date!

Between the huge orchestral overture and then the massive harmonies during "Can't Wait" - all the fireworks. It sounds like a million people are singing. The drummer also needs a raise because he's A+.

2. Talk To Her / Carnival / Zoltar Speaks

We went literal - how could we not?!

Josh is going through it waking up as an adult. This seemed subtle enough.

The opportunity presented itself, and we took it! What a joyride this number is ("Fun" will get stuck in your head - also you are welcome)!

Oh my gosh, talk about a high energy Act 1 closer. If your head's not bopping, turn the music up. Yeah, we're repeating this one.

We have a lot of questions about this gif. Mostly we're happy it exists because it's so appropriate. Can't remember the last time a soft drink cup had such thorough sound effects on a cast album.

Mrs. Baskin - it's ok! First Josh was going through it, and now we're here. He'll be back.

Crista's voice is so dreamy on her song. Immediately thought of Fred and Ginger.

A caffeinated nearly full cast swinging production number - we'd be dancing too! Daniel's "Miss Watson!" is worth the price of the cast album.

Ooof, Susan's friends are just too much.

Give us a love song with a key change any day. Susan is head over heels! What is going to happen!?

16. When You're Big / Skateboard Ballet

Vocally - this is our favorite track by Daniel Jenkins. His "But when you're big, you have to be a man" towards the end of the song is BROAD.WAY. If we could skateboard, this would be us.

The whole show ties up like a big red bow in this one song. It's moving, it's orchestral, it gives a hint that Zoltar might strike again. What a journey!