Five Off-Broadway Performances You HAVE to See 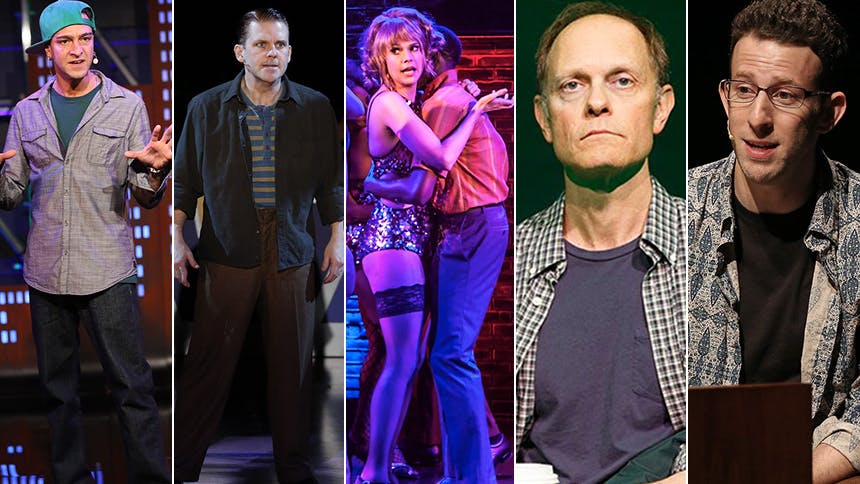 While the fall season on Broadway heats up, BroadwayBox shines the spotlight on five stellar off-Broadway star turns worth the price of admission. (Granted there are way more than five but off-B'way is vast and it's hard to see everything.)

There is an authenticity and ease Nick Blaemire brings to the biographical Jonathan Larson musical that's equal parts stunning and mesmerizing. Even during his harder-to-love moments, you can't help but root for him. It's a performance you want to experience more than once.

Wow, Robert Creighton is working his ass off as James Cagney. It is (and I don't use the term loosely here) jaw-dropping what he's doing in that show. It's a well-rounded, special performance that goes beyond actor and character. Creighton loves and respects Cagney, and he wants you to too; he wants you to know this man beyond his Hollywood persona.


Two-time Tony winner Sutton Foster is everything you want and more as Charity. From the high comedy and hijinks of her scene in Vittorio Vidal's apartment to the anguish of "Where Am I Going?", Foster captures your heart.


Oh my gosh, I don't think I've ever loved David Hyde Pierce as much as I did as Nate Martin, the flawed but chilling accurate protagonist of A Life. Everything about his performance felt like a reflection (even if/when Nate's story doesn't match up to your own). The whole thing was pretty astonishing.

The musical's creator and star (and one half of The Q Brothers), Gregory Qaiyum is an Iago for the ages. You seriously can't take your eyes off him. There is such depth and passion in his performance that it really roots the entire hip-hop retelling.

Cagney
Best Priced Tickets
Newer
There's a Party Raging On in the Mezz of Natasha, Pierre, & The Great Comet of 1812 & We Have the GIFS to Prove It
Older
Hot Clip of the Day: Anastasia Leading Lady Christy Altomare's Soaring "Journey to the Past"
Sign up for BroadwayBox Discount Alerts