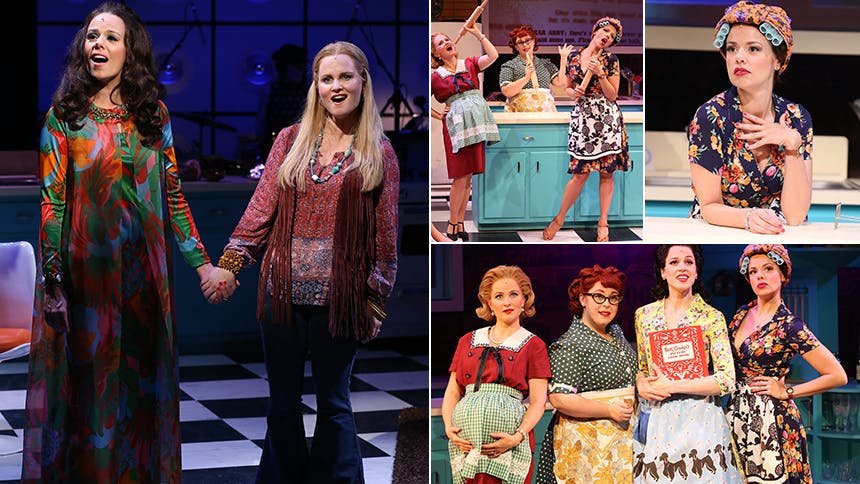 Drama Desk Award winner Janet Dacal (In the Heights, Wonderland, Good Vibrations) stars as glamazon Agnes (later soap star Maria Magenta), a woman too big for a small-town life, in York Theatre Company's New York premiere of A Taste of Things to Come. The new musical depicts American life in the 1950s and 1960s from a female point of view. Act one introduces audiences to four housewives living in Winnetka, Illinois in 1957. The ladies trade recipes and dreams as they prepare for a cooking contest. Act two flashes ahead 10 years to 1967, and audiences see how feminism and the sexual revolution changed the quartet for better and worse.

Janet Dacal, Paige Faure, Allison Guinn and Autumn Hurlbert in 'A Taste of Things to Come'

BroadwayBox caught up with Dacal to talk about the timely new musical, what it's like when everyone in the rehearsal room is a woman, and how In the Heights was like Disneyland.

1. What line or lyric from the show do you find yourself thinking about the most outside the theatre?
This show has wonderful themes that were relevant in their time and continue to be today. More than one lyric or one line, it's the themes that stir in my head outside the theatre. Women. Freedom. Equality. Having a voice. Making dreams real. We're living a moment in time where these themes are particularly pertinent. I'm reminded that we've come so far and still have so much to accomplish.

2. Do you have a signature dish? What does Janet Dacal make a killer meal of?
Picadillo. It's good, old-fashioned Cuban comfort food.

3. What did your Wonderland experience teach you about yourself?
Oh goodness, very many things. The biggest take-away from Wonderland was how to lead a company. As the lead of a show, you're driving the ship, not only on stage but off. I became very aware of how I showed up and always tried to add value to space.

4. Tell us an In the Heights secret that fans probably don’t know.
Forget Disneyland, Daniela's Salon was truly the happiest place on earth. Hijinks and hilarity all day, every day. I have Nina Lafarga's and Rosie Lani Feidelman's nails etched in my memory forever since I gave them manicures and pedicures eight times a week.

5. How does working on a show with an all-female cast and all-female creative team (like A Taste of Things to Come) feel different than a new musical where many of the people in the room are men?
There's a great sense of ease in the room and also, I feel, less judgement. All the ladies are incredibly talented and I think we're inspired to be better in a very encouraging way.

See Janet Dacal in 'A Taste of Things to Come' at off-Broadway's York Theatre through December 11.

A Taste of Things to Come
New
Best Priced Tickets
Newer
Six Pieces of Political Theatre to See After the Election
Older
Clip of the Day: 10 of Broadway's #UnfilteredWomen Cover the Dixie Chick's "Not Ready to Make Nice" at Central Park's Strawberry Fields
Sign up for BroadwayBox Discount Alerts