Five Burning Questions with The One and Only Charles Busch 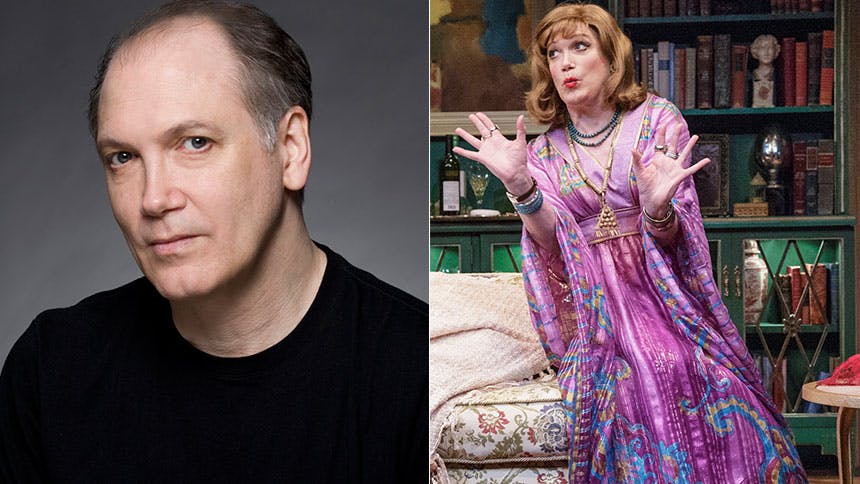 Celebrated playwright and performer Charles Busch is back off-Broadway in the riotous new comedy The Tribute Artist. In his latest play, Busch reunites with longtime collaborator and friend Julie Halston, starring as an aging tribute artist (Busch) and a struggling realtor (Halston) who hope to make millions by selling a Greenwich Village townhouse that doesn’t quite belong to them. BroadwayBox caught up with the Tony nominee to get the goods on the new show in this week’s Five Burning Questions.

1. There’s a great scene in The Tribute Artist where the characters describe what a one-minute video of their lives would be. What does Charles Busch’s one-minute video look like?
[Laughs.] Well, the play is really autobiographical in some sense. There are a number of things Julie and I say that are just sheer reportage. So, when [my character] Jimmy says his one-minute video would be him walking by himself down a windy street, that’s pretty much me in a nutshell.

2. Do you have a favorite tribute artist?
Oh, Charles Pierce was such an extraordinary impressionist. And when I was very young, there was this man named Mr. Lynne Carter, and I remember seeing him; he was flawless. It was these old time female impersonators that did all those classic ladies that I love. I don’t know if that person could exist today. Just from watching Drag Race, it seems like it’s more about people having their own drag persona and lip-synching to contemporary music.

You watch RuPaul’s Drag Race?!
I’m a reality competition show junkie. I watch them all. With Drag Race, I tend to watch the last three episodes to see what people are talking about and get the gist of it.

3. Which three old Hollywood movie stars would you like to host for dinner?
I’d have Judy Garland—if she were in good shape. She was supposed to have been the wittiest woman in Hollywood. Ava Gardner— if she was in good shape—because I heard she was bawdy and funny. It would have to be a party with no liquor or pills. And Marlene Dietrich because she would serve the dinner. An artist friend of mine was going to draw Marlene, and when she showed up to his apartment, he was having this little gay party. Well, she was such a German hausfrau that she insisted on serving the whole meal; she wouldn’t sit down.

4. What classic leading man role do you think you could knock out of the park if you played it?
Henry Higgins?...I don’t see myself playing any of those classic male roles unfortunately, but I’d like to take The Music Man and make it Harriet Hill, a very glamorous sales lady. That part I could play quite marvelously. I’d do it like Rosalind Russell.

5. You make so many people laugh with your work. What TV sitcom can make you laugh every time, without fail?
I’m telling you, it doesn’t get any better than Lucy and that chocolate factory or Lucy doing that operetta "The Pleasant Peasant" in I Love Lucy. That’s it for me. That’s the apex.