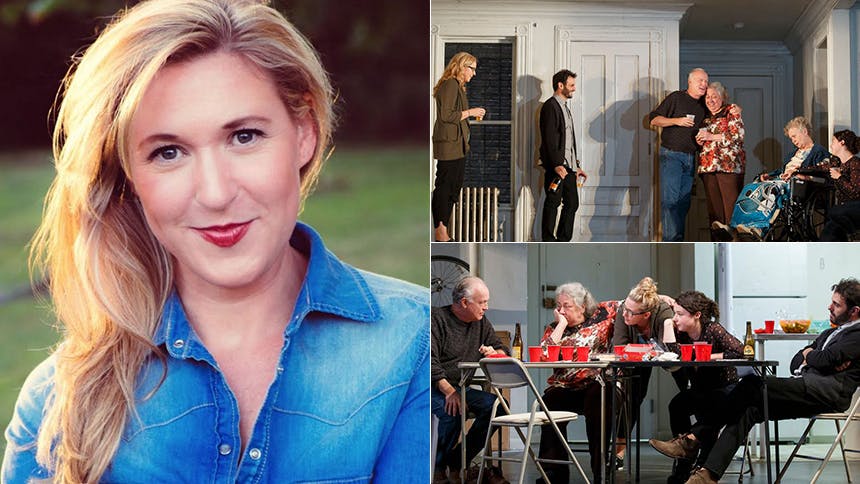 Cassie Beck sure knows how to pick a project. The rising star, who appeared in off-Broadway's The Whale, The Drunken City and The Insurgents, is part of the hottest show off-Broadway right now (with a Broadway transfer already in the works), Roundabout Theatre Company's The Humans.


Beck stars as Aimee, a chronically ill 9/11 survivor going through an awful breakup with her girlfriend, in this ensemble family drama. Below, Beck talks with BroadwayBox about discovering her character's sadness, being Mississippi's easiest scare and overcoming a breakup.

1. What fictional family from TV or film did you so want to be a part of growing up? How about now?
Anybody remember Rags to Riches? Yeah, I wanted to be the seventh singing orphan. My childhood friends that lived down the street used to invite me over and we would reenact all the numbers in their living room. My favorite was the episode where "Diane" went for her driving test—ah, to die! Now, I would love to play Amy Schumer's sister. She's brilliant.

2. Are you an easy scare? What's the last thing you saw that you had to hide your eyes?
I can't even talk about this. I loathe scary stuff. I lose my marbles. I went to high school in a small town in Mississippi and they have this crazy haunted forest set up that people walk through. FOOLS! I overheard our guide tell one of the characters with a CHAINSAW—"get the blonde, she's a screamer". In fact, I was screaming and jumping and crying so much, I lost my favorite necklace. They told me I could walk back through and look for it. Not on your life.

3. Having grown up in a military family that traveled all around the country, did you have a system for yourself when starting new schools, making new friends, etc? Did you have a favorite place?
Ah, yes. Being the new kid in school basically sucks. I was so nurtured by my family, though. We were a unit, and I thought my brothers and sisters were soooo cool. If I was ever having trouble, I remember thinking to myself that it didn't matter, because I had the most bad ass siblings on the planet. They kept me safe. And I danced a lot, so I was able to connect with people that way, through performance. I didn't really have a favorite place. Anywhere my family was—especially once my nieces and nephews came into the picture. I just wanted to babysit them all the time.

4. What was the most important (or telling) thing Stephen Karam and Joe Mantello talked with you about that informed your performance as Aimee?
They were both helpful in regards to Aimee's heartbreak. We talked a lot about "Carol" (the ex) with all of the cast, actually. That undercurrent of loneliness and confusion throws Aimee, a normally very competent and confident person. We decided it's the first major holiday without Carol. That helps, because I feel her absence throughout the whole play, not just in my phone call with her on stage. The family feels the loss. We are mourning her, and with that comes all the stages of grief. I try to tap into those during the show.

5. Aimee is going through such a tough breakup in The Humans, any advice for her? Do you have a cure-all for a bad breakup?
You know—I'd probably take the five dollar footlong and Netflix route. But that's not good advice for Aimee. She's way more proactive. She should probably take a small vacation alone somewhere. No where romantic! And then, hit the gym—sweat it out.

See Cassie Beck in 'The Humans' at off-Broadway's Laura Pels Theatre through January 3, 2016.