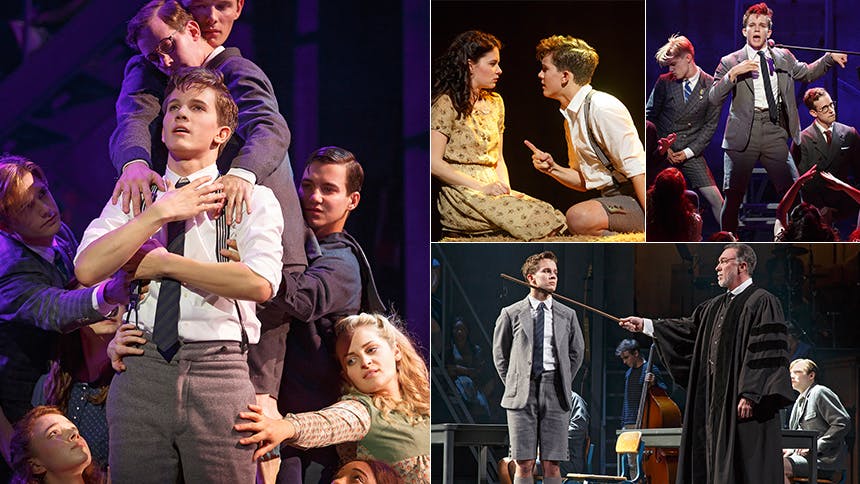 . He brings such passion and intensity to the role, simultaneously signing and speaking/singing. He’s also gearing up for the 2016 release of the film adaptation of Speech & Debate, in which he stars as openly gay high school student Howie. Below, the 22-year-old Arizona native chats with BroadwayBox about the summer that changed his life, finding euphoria on Broadway and his own high school experience.

1. What was your first introduction to deaf culture? What made you want to be an interpreter?
I feel like my life has been filled with accidental blessing—Spring Awakening being one of them. Another one of the three I could count in my life would be when I stumbled upon (quite literally) a job at a summer camp for individuals who have special needs. I was 15 years of age at the time, and I met my first deaf friends and campers who happened to be deaf. It was there that the addiction started. That was the greatest summer of my life—one of the greatest loves of my life was that camp. I have to say, very obviously, if it weren’t for that summer camp, I wouldn't be here at all and I’d be ignorant to a culture that has become an influential part of me.

2. What’s something about being a Broadway star that no one prepared you for?
I think no one could have prepared me for how euphoric it feels to be on that stage in that story and then how it feels being offstage, and how unsatisfying it could be sometimes knowing that it feels so satisfactory onstage. The character I portray is very honest and the story is very honest. In this story, the characters bear their scarlet letters with pride and that's a much easier thing to do when you’re liberated onstage; when you go offstage, life is real and it's a little more tough to feel so strong in your convictions.

3. You’re a bit of gypsy, having moved from Arizona to Chicago to Colorado to LA to NYC. Is there something that has to come with you from place to place?
I’m a minimalist so I don't like to take a lot of things but one thing I can’t bargain with is my dreamcatcher. I sometimes have unpleasant dreams, and my sister bought me a dreamcatcher for Christmas after I moved to LA. Ever since then I’ve kept it with me; it's very important to me, as is she.

4. What were you like in high school? Any advice you wish you could give your high school self?
When I was in high school I was very dedicated to my family and academics—I loved math. I did a little bit of theatre. I didn’t really have a lot of friends and I think I liked it that way. I definitely knew I was content. The funniest thing about being in this show right now and everything that comes with it is that I think I mistook independence for maturity and those things are absolutely not related. It’s only now that I realize that I have much to learn and much to mature—independence is just a skill that you can have or not.

5. Finally, let’s play the desert island game:
Movie: East of Eden.
Album: Back to Black.
Book: Letters to a Young Poet.
Snack: Anything made by my grandmother.