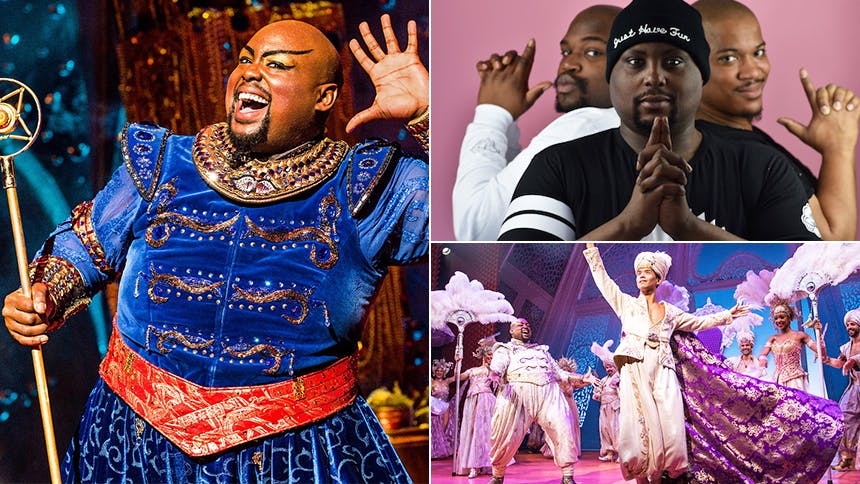 Major Attaway makes his Broadway debut and delivers one of our favorite replacement performances of the year as The Genie in Disney's smash hit Aladdin. On March 25 and 26, Major Attaway teams up with the Genie Standbys, Juwan Crawley and Deonté L. Warren, for The Genies' Jukebox at The Green Room 42. The trio takes the stage to perform an eclectic set of Disney classics, theater showstoppers and pop hits by Stevie Wonder, Whitney Houston, & Luther Vandross.

BroadwayBox caught up with Major Attaway to hear about his pre-show playlists, working on his Genie since age 13, and the Disney movie that helped inspire the chubby kid growing up.

1. What’s your pre-show like for the Genie? What do you listen to before and during the show to get you in that place?
The Genie track is a bit of a mini-marathon, so I like to ease into that headspace. While I do my base layer of makeup, I’ll usually start with something relaxing to let the energy of New York dissipate. Anything from Bob Marley, The Isley Brothers, The King’s Singers, Jill Scott, Gregory Porter, Erykah Badu, Elton John, Sara Bareilles, Luther Vandross, The Beatles, Corinne Bailey Rae, and of course any number of show tunes.

Once it’s time to do our physical warmup, we have to turn on the juice so to speak. This is when I’ll switch to something a little more funky so that I can really let the rhythm get in these hips! I’m a fan of Trombone Shorty; CeeLo; OutKast; The O’Jays; Earth, Wind and Fire; Snoop Dogg; John Legend, Stevie Wonder, Nas, Joe Williams, Sage Mode Wrex (my cousin), Hamilton and The Hamilton Mixtape. I’m always open to suggestions as well.

2. When you took on the role of the Genie full-time, how did you go about to make him your own? What did you want your Genie to be?
The first thing I wanted was for my Genie to be honest. He lives too far outside of life’s normal given circumstances to be disingenuous. There is a VHS tape (Google it, kids) of me singing “Friend Like Me” at age 13 floating around Texas. This is the Genie I wanted to bring to Broadway, the magic is as real to me now as it was then. I think when you are playing a human version of a character with phenomenal cosmic powers and a predetermined fan base, you want your performance to be relatable and yet rejuvenated. I want my Genie to be warm and inviting, while still explosive and unpredictable.

3. What are your three wishes right now?
1. Longevity in this strenuous business.
2. To inspire people to make decisions based on love rather than fear.
3. Beachfront Lamp property!

4. What was the Disney movie that rocked your world growing up? What spoke to you about it?
I can easily recall having worn out copies of both Aladdin and The Lion King growing up. Honestly though I remember The Emperor’s New Groove finally breaking the mold for me. I was a chubby kid who never chased girls growing up so chasing princesses wasn’t high on my priority list. Kuzco had a razor-sharp wit that he was using for power instead of a princess. I took from it that the power he had wasn’t being maximized until it used for the good of the people. With great power comes great responsibility.

5. You’re at a dive bar, and you put a dollar in the jukebox and you get to play four songs. What are they?
In no particular order:  “Zoom” by Commodores, “Don’t You Worry ‘Bout A Thing” by Tori Kelly, “Good Morning Heartache” by Joe Williams and “Washingtons By Your Side” by Wiz Khalifa.

Don't miss Major Attaway, Juwan Crawley and Deonté L. Warren in 'The Genies' Jukebox' at The Green Room 42 on March 25 & 26.