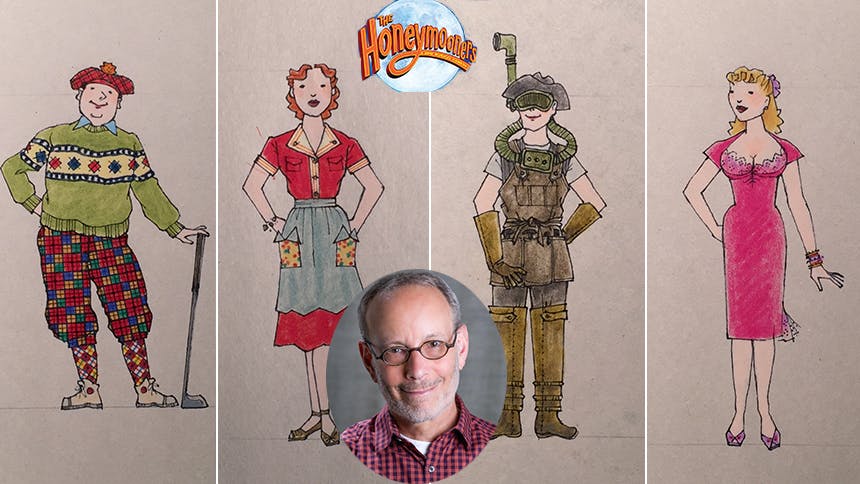 Costume designer Jess Goldstein won a Tony Award in 2005 for his work on LCT's The Rivals. He's the man behind the costumes for Jersey Boys, Newsies, On the Town, Take Me Out, Proof, and Love! Valour! Compassion!. This fall, Jess works to bring the classic CBS TV sitcom The Honeymooners to the stage in the world premiere musical adaptation running at Paper Mill Playhouse September 28-October 29.


Scroll on as Jess Goldstein offers BroadwayBox a first look at his designs and how each was inspired.

Of course, I was very familiar with the TV series because I’m old enough to remember when it was originally on. I started watching it as a child in the 1950s, so it’s always been very dear to my heart. Obviously, I’ve only seen the characters in black and white so the main thing I did was to add color.

There isn’t too much color for Ralph’s uniform—it is what it is. It looked grey in the series and we are keeping it grey. The funny one for Ralph is his golfing costume. It’s very much based on what he wore in a particular episode where he takes up golf; in our show, he takes it up to keep up with the guys at the ad agency. His idea of what a golfer wears is this outlandish argyle sweater (ours is chartreuse and red), these very vivid plaid knickers, very colorful argyle socks, and a funny golfing hat—which they used to wear at the turn of the century for golfing. It’s like a Scottish beret with a red pom-pom on top. It’s totally outrageous.

With Alice, I looked at a lot of Audrey Meadows just to refresh my memory, but I also have a long experience doing shows set in the 1950s, so I went further than just things she actually wore. She’s a very fiery woman, especially for the time, so I wanted to emphasize that with the colors she wears—one of her house dresses is a tomato red and another is a vivid, graphic print. We are doing Leslie as a redhead, which is what I think Audrey Meadows was, even though you couldn’t see her hair color. For her big number in Act Two, she is in a beautiful, deep red cocktail dress. I love using color on stage, and I have this emotional instinct when I read the script and form an idea about a character’s clothes—color is one of the main things I think about. I tried to really make her a colorful character but totally true to who the character is. If the TV show were done in color, I feel this is what she’d look like.

The first time you see Ed Norton, he comes up from the stage floor as if he’s down in a sewer and you see him in his sewer outfit. It’s very funny. It’s very much based on an episode where you see him in this outfit—these long rubber boots and gloves, work apron, and a funny old-fashioned gas mask—but done to the extreme. What people might imagine you’d wear if you worked in the New York City sewers. Then he takes the mask off and puts on his iconic Ed Norton fedora, and it’s kind of a reveal for the character in that way. You finally recognize him.

With Trixie, I had the most freedom since the character in our Honeymooners is almost an invention rather than based on the Joyce Randolph character. Trixie is wanting to get back into show business and her clothes all have a former showgirl feeling to them; even when they are ordinary clothes, they are colorful and have more pizzazz than the typical Brooklyn housewife. The first time you see Trixie in the show, she has just bought herself a new dress she is going to wear for an audition, so I chose a hot magenta color—a very deep pink. Of course, we’re doing her as a blonde, and it seemed like a sexy color for a blonde in the 1950s. Pink suddenly post-war became a very big fashion color. The dress is very clingy and emphasizes an hourglass shape to the figure and has a big slit down the front so she can do all her dance moves.

This is part of “Toast of the Town”, the big tap number that closes Act One. Ralph and Alice are imagining themselves as millionaires with Ralph’s new job at the ad agency, so it becomes a fantasy number with the men in tuxes and the women in these floor-length gowns. The entire ensemble comes in as the swells—wealthy friends of theirs. There’s a fun trick with the women’s gowns. When they first appear, they are in these very high style 1950s evening gowns in a tight palette of lavender, rose, and hot pinks, then they do a trick with the skirt where their legs are revealed and the skirt hangs behind them and frees them up to do this big tap number. It’s based on this Ann Miller number in Easter Parade—that’s where I got the idea for it.

See these costumes come to life in 'The Honeymooners', running at Paper Mill Playhouse September 28-October 29.