Your EGOT Cheat Sheet: What Theatre & TV Stars Still Need What To Win 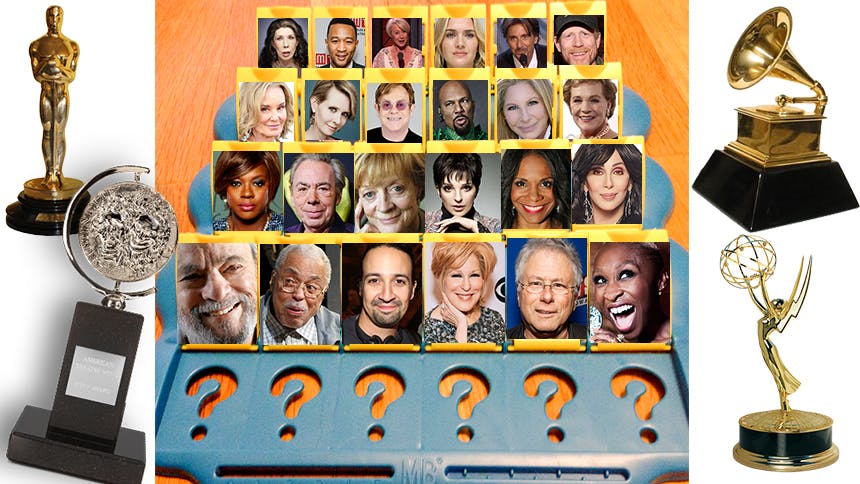 There’s a new crop of Emmy Award winners, and that always gets people playing the EGOT game. Let’s take a look at who still needs which award to get into the exclusive Emmy, Grammy, Oscar, Tony winners club. (This is also from a v. Broadway POV, so this is not a complete list.)


The Broadway actors who need some love from Hollywood in order to EGOT include Cynthia Erivo (who got her first three awards right quick!), Audra McDonald (the queen of the Tony), groundbreaking writer and actor Lin-Manuel Miranda, and 2017 Tony Award winners Cynthia Nixon (yes, Miranda Hobbes Emmy!) and Bette Midler (I could find three movies from her current canon that deserved an Oscar, but whatever).

Someone write a wonderful, powerful senior story for Dick Van Dyke, Lily Tomlin, & James Earl Jones so the trio could EGOT once and for all!

Come to Broadway & Get a Tony Award

Three divas in desperate need of a Tony Award are Cher, Julie Andrews, and Barbra Streisand. Now, Cher could win for her upcoming bio-musical or she could star in Mame or something and win for acting. Let’s revive Night Music again for Julie Andrews. As for Babs, pick a Sondheim, any Sondheim.

Ron Howard, Kate Winslet, and Common also need Tony Awards—and the options are endless for them.

Martin Scorsese could direct (or co-direct) something big and nab his Tony. One Best Score Tony win could change everything for Randy Newman, Burt Bacharach, John Williams, or Up composer Michael Giacchino—he’s just a Disney stage adaptation away.

The heartbreak of the whole Emmy Award debacle are the two men who are the soul of musical theatre: Stephen Sondheim and Andrew Lloyd Webber. Neither has an Emmy…and now series do musical episodes and networks do live musicals and still neither has an Emmy. For shame.

Books on Tape Are an Easy Grammy for Non-Singers


Also, the Grammys is a cruel mistress for never having rightfully awarded Liza a Grammy. She has a lifetime achievement but no competitive Grammy. Let Liza shine and let Liza EGOT.

Newer
Meet the New Class at the School of Rock, Episode 1: Getting the Big News & Current Musical Obsessions
Older
Broadway Unplugged: Waitress' Caitlin Houlahan & Yair Evnine Perform an Acoustic "When He Sees Me"
Sign up for BroadwayBox Discount Alerts